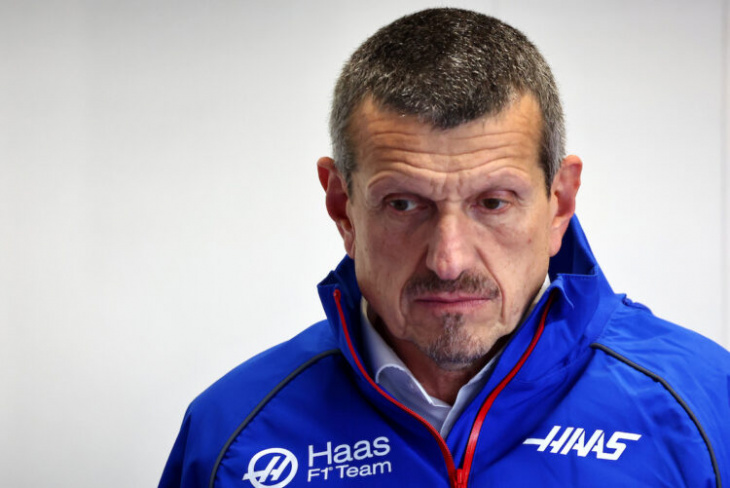 The Maranello-based team started trialling this season’s engine in 2021, and after spending that season developing their chassis alongside it, it established itself as one of the front-runners this year.

Four wins between Charles Leclerc and Carlos Sainz saw Ferrari beat Mercedes to second in the championship, but it was ultimately beaten to both titles by Max Verstappen and Sergio Perez of Red Bull.

Haas itself used 2021 to prepare for the new technical regulations, and after Kevin Magnussen’s return alongside Mick Schumacher, the American side climbed off the foot of the championship to eighth.

Steiner hinted that a nifty bit of machinery will be installed into the back of the Ferrari, Haas and Alfa Romeo cars next year after the manufacturer team turned its attention to that department towards the back end of the 2022 campaign.

“On Thursday I met Mattia Binotto and he told me that next season’s engine will be the bomb,” said the Italian at the ceremony for the Lorenzo Bandini Award, which was won by Magnussen.

“In Emilia Romagna, there is a lot of support for Ferrari. And if it [the engine] is competitive, it will be positive for us too.”

Magnussen claimed a stunning pole position in Brazil in the penultimate round of the season, and the Dane grabbed the lion’s share of Haas’ points in 2022.

After two seasons of racing almost exclusively at the back, Steiner is pleased at the progress his team made, but he wants more.

“We’ve had two difficult years with the pandemic; the championship that just ended went well, but it could also have gone better,” he explained.

“We consider it a year of growth. Magnussen gave us a pole position that wasn’t in the plans and in 2023 we want to grow further. The goal is to make another step forward in the standings, to always fight for points and one day get on the podium.”

After the dismissal of Schumacher, Magnussen will be partnered next year by former Williams, Force India and Renault driver Nico Hulkenberg. Steiner hopes that his new driver line-up can continue the team’s forward momentum.

“You’ll see next year we will have a single-seater that will represent a step forward, we hope to beat AlphaTauri again,” he added.

Binotto is set to leave Ferrari at the end of the month, with chairman John Elkann unimpressed at a series of errors that saw the team fail to mount a serious title challenge. No replacement has yet been confirmed.

Keyword: ‘Next season’s engine will be the bomb’ – Steiner reveals Ferrari optimism