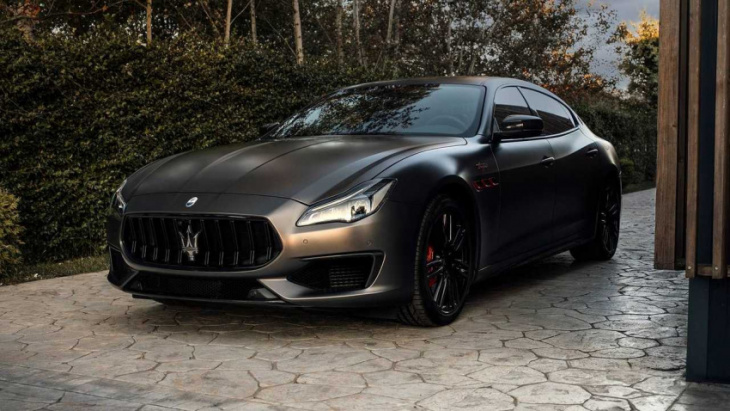 The next-gen Maserati Quattroporte, expected to launch in 2024, will be all-electric. According to a recent report by UK outlet AutoCar, the Quattroporte EV will be based on the same platform as the upcoming Granturismo. Given the Granturismo will be available in both EV and ICE guise, it’s probable a traditionally-powered version of the new Quattroporte will also be sold.

The electric Quattroporte should adopt the Folgore nameplate used by the EV versions of the Granturismo and Grecale. For those of you curious, Folgore means lightning in Italian.

In terms of battery size, it’s possible the Quattroporte EV will use the same 105 kWh unit as the Grecale Folgore. The Granturismo’s 92.5 kWh pack is also an option and perhaps more likely given both cars will share a chassis. Expect AWD, and upwards of 500 hp as standard. A significantly more powerful performance-oriented variant could also launch to rival the Porsche Taycan Turbo S.

In terms of range figures, we expect the Quattroporte EV will fit somewhere in between the Grecale Folgore (300+ miles per charge) and Granturismo Folgore (279 miles).

As for pricing, the current ICE Quattroporte starts at $97,995 in the US. However, expect this new electric model to be considerably more expensive. The Quattroporte will soon be Maserati’s only sedan as the Ghibli is being discontinued, hence the Italian marque seemingly wants to make it more exclusive. A starting price in the region of $150,000 is possible, although that’s just speculative.

On top of the Folgore variants of the Quattroporte, Granturismo, and Grecale, Maserati is also planning a fully electric version of its flagship MC20 supercar. The MC20 Folgore will reportedly have three motors and, like the combustion version, will be available as either a coupe or convertible.

Keyword: Next-Gen Maserati Quattroporte Will Be Fully Electric, Due In 2024

The first images of the new Maserati GranCabrio prototype

We spend some time with the Italian supermodel (we mean, supercar)

Debuting two years before the Daytona at the 1966 Turin Motor Show, Giorgetto Giugiaro’s strikingly beautiful design clearly influenced Pininfarina’s designers. The long bonnet flowing into a sloped roofline fronted by a wide-mouth grille and the prominently displayed trident emblem, the Ghibli was equal parts aggressive and sensual. Svelte and ...

Modified MC20 collides with carbon fibre factory. Comes off second best… Uh oh, it looks like Mansory has got hold of a Maserati MC20. The German tuner has released some renders of its upcoming plans for the V6-engined Italian, and it’s fair to say that it’ll no longer be the ...

Maserati has promised to offer an electric powertrain in every vehicle it sells by as soon as 2025. The transition has already started with the recently revealed 2024 Granturismo which will offer buyers the choice of gas or electric power when it lands at dealerships next spring. Maserati’s new ...


View more: Next Maserati Quattroporte reportedly due in 2024 as pure EV

MILAN: Stellantis sees its future as a niche player in China though its premium brand Jeep and luxury brand Maserati, its chief financial officer said today, as the carmaker rethinks its strategy in the world’s largest market. The group said this week it was closing its joint venture that ...

Who Maserati has lined up to replace F1-bound De Vries

Maserati Grecale Modena review: an effective crossover, just not an inspiring one

Maserati GranCabrio Spied For The First Time With V6 Engine

Buy this Maserati MC12 Versione Corse, be the hero at the local track

Maserati MC12 Corse For Sale: Own A Legend