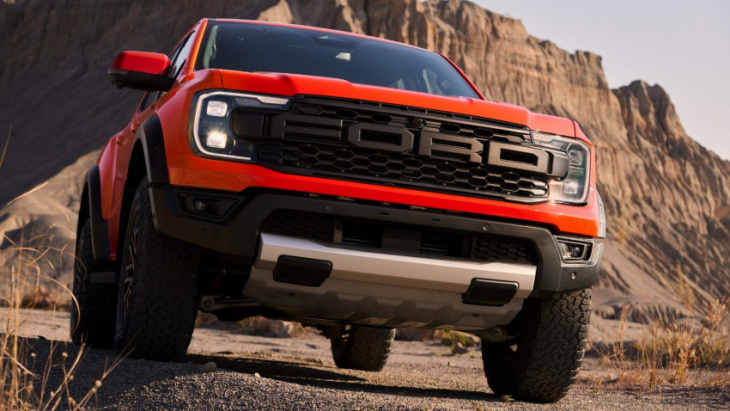 A next-generation Ford Ranger Raptor, built by Ford Performance’s North American arm and designed by its Australian division, placed the fastest in the stock mid-size class. The road-legal truck, which was driven from California to Mexico before the event, competed on Nov. 18 in SCORE International’s 2022 Baja 1000. The event is home to a gruelling 828-mile desert course in Ensenada, Mexico.

Additionally, the Ranger outlasted two other vehicles — Lexus LX600 and Toyota Land Cruiser — in different road-legal categories. The Ranger Raptor completed the course in 26 hours and 21 minutes, almost seven hours faster than the Land Cruiser, according to Motor1.

“This is the Baja 1000, one of the toughest off-road races in the world,” said Mark Rushbrook, global director of Ford Performance Motorsports. “This effort has been a global effort for Ford Performance from the beginning, with Ford Australia having done the design and initial development signoff, then shipping it to the States and working with all of our partners to pool all available resources for this common goal. It takes a great truck and it takes great people. We’ve proved that we have both of those on a global level.”

The truck ran on low-carbon biofuel from Shell and used the next-gen Ranger Raptor’s stock powertrain, only requiring basic maintenance and system checks alongside the refuel stops.

“We’re here, finishing the Baja 1000 and winning our class, all on a biofuel,” said said Brian Novak, off-road motorsports supervisor, Ford Performance. “It’s so impressive that this was all done on a stock Ford Performance powertrain, too. It’s been exciting to work with Shell on this project.”

It was equipped with a snorkel and safety cage to abide by Baja 1000 regulations. A bed-mounted 160-litre fuel tank, Perspex rear windows, additional LED lights, a fire extinguisher, and a racing harness were added to the truck, to comply with Baja 1000 rules. The Ranger Raptor was also outfitted with 17-inch forged alloy wheels wrapped in 315/70 R17 BF Goodrich tires and standard front and rear suspension with Fox shocks.

“Unbelievable, what a truck. It feels ready to go again,” said ARB managing director Andy Brown. “I can’t believe how reliable it was, how strong, how stout, how it handles, how it goes, how it stops. It’s just the complete package. The track? Hell. It was rough and we did pre-running but honestly the track was so cut up and different that we felt we were tackling it for the first time. But a challenge is what we came for, and the group we came here with, and the truck, were perfect for it.”

After what’s being called a nearly-flawless run, the team took public roads to drive the truck back to its base in Riverside, California. The drive also pays homage to the 2017 Baja 1000 effort, in which a stock F-150 Raptor also made its way home after the off-road competition.

Finish the #Baja1000 ✅
Drive back across the border ✅#NextGenRangerRaptor pic.twitter.com/kxhOlDwuuU

Ford announced the next-gen Ford Ranger Raptor is expected to touch down in international markets in 2023.