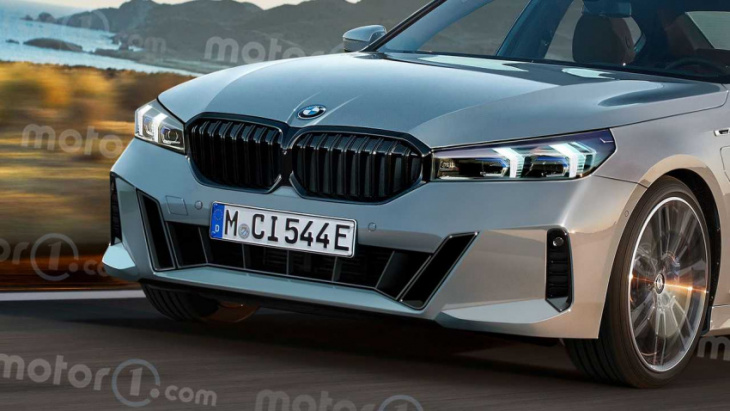 The launch of the new BMW 5 Series is imminent. Recent spy shots have shown the car losing layers of camouflage, providing our best look yet at the model. Our new, unofficial rendering above peels pack even more of the coverings, previewing what the luxury sedan could look like when it debuts early next year.

BMW will offer the new 5 Series with a variety of powertrains, including all-electric. However, the i5 will look quite similar to the others in the lineup as it will ride on the same CLAAR architecture as its gas-, diesel-, and hybrid-powered counterparts.

The 5 Series won’t look radically different from the current car, with BMW designers taking a conservative approach to the restyling. The car features a slim kidney grille flanked by even slimmer, swept-back headlights. Thin intakes sit on the outsides of the bumper, with an angular lower grille opening between them.

The rendering doesn’t depict the car’s rear-end design. However, the spy photos appear to show the 5er getting unique taillights – wide dual-bar units that could be connected. Though the Hofmeister kink will remain, it’ll succumb to BMW’s current trend and receive flush door handles. Each 5 Series variant will likely feature unique design touches that differentiate the trim from others in the lineup. The M Sport cars will look less aggressive than the full-blown M5 or the electric i5.

The 5 Series will accommodate a variety of powertrains, including diesel engines. The M5 will feature a plug-in hybrid setup that could deliver 644 horsepower (480 kilowatts) and 590 pound-feet (800 Newton-meters) of torque. The same powertrain is in the XM, which can produce up to 750 hp (559 kW).

However, before the M5 arrives, another plug-in 5er will debut, the M560e, which should make around 550-600 hp (410-447 kW). Details about the I5’s battery and electric motor setup remain a mystery, but the automaker will likely offer a few configurations.

We expect the new 5 Series to debut in early 2023, with the electric i5 breaking cover sometime next summer.

You may think BMW‘s double kidney grille can’t get much bigger, yet the company could soon make one so large it even incorporates the headlights. BMW has filed a patent with the World Intellectual Property Organisation (WIPO) as first reported by Auto Express, which illustrates technology that allows the double ...


View more: BMW grilles could get even bigger

On paper, the four-door is a tenth of a second quicker, but is it the same on the tarmac?

BMW’s EVs are getting a bit too quiet. Photo: BMW People like complaining about the sound EVs make. They love saying that the futuristic hum of an electric car isn’t as exciting as the sounds that emanate from a gas-powered car. But, that hum is an important safety feature ...

Is this the ultimate 5er apart from the M5?


View more: Alpina gives the current BMW 5-Series a proper send-off with the B5 GT