The Vauxhall Grandland SUV has been updated for 2022, but still falls behind some of its rivals in what is an extremely competitive class

The new, simplified Vauxhall Grandland range represents better value than its predecessor, while the design updates and new infotainment tech make it a more appealing family SUV. However, this is an incredibly competitive class, and while the powertrain is punchy and the Vauxhall offers improvements and fair efficiency, the Grandland’s ride and its infotainment tech could still be more polished.

It was June 2021 when the updated Vauxhall Grandland was first unveiled, July when it went on sale in the UK. It was meant to follow the updated Crossland crossover in the launch cycle, but Covid put paid to us driving the car in Britain until now, with the brand’s big-selling Astra family hatch jumping the queue.

But the Grandland family SUV is a big car for Vauxhall and this update is crucial to the British brand’s fortunes under the Stellantis umbrella, so what’s new to keep buyers engaged? Well, like its smaller sibling, it’s dropped the ‘X’ from its name, so it’s now called simply: ‘Grandland’.

That’s coincided with a slick redesign sporting Vauxhall’s ‘Vizor’ flush front grille arrangement, with the headlights neat extensions flanking this panel. There’s a much cleaner look at the rear too, with the ‘Grandland’ name spelled out on the tailgate.

Under the bonnet the engine line-up is familiar in that the 128bhp 1.2-litre turbocharged three-cylinder petrol engine remains. It’s the car we’re driving here and will continue to be the most popular powertrain in the line-up. 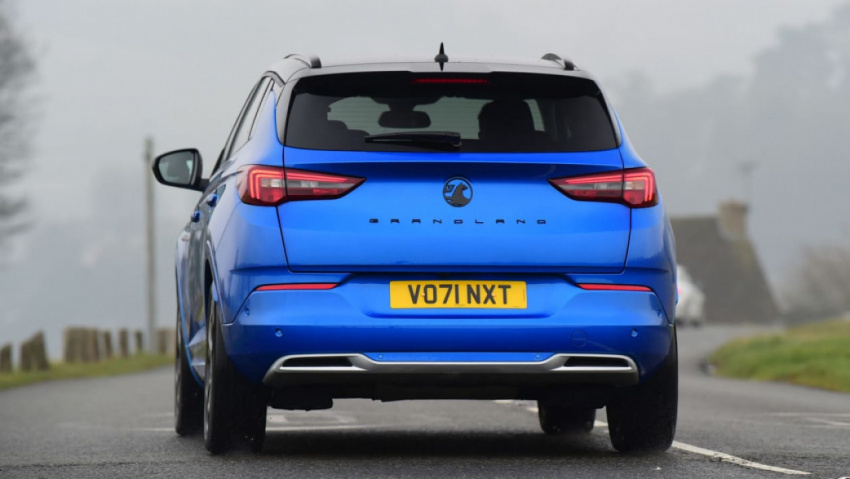 The Grandland is still based on the “multi-energy” EMP2 platform, so there’s a 222bhp plug-in Hybrid-e powertrain from launch. A 296bhp Hybrid-e model will join the line-up later, we’re told, but we can’t imagine many buyers will opt for this.

Inside, like other Vauxhall’s the updates extend to the infotainment, with the brand’s Pure Panel set-up combining either a seven or a 12-inch digital dash depending on specification with a seven or a 10-inch touchscreen.

Our Ultimate-spec car boasts the latter grouped together in a piano black surround, and while it does a decent job of adapting the old cabin design (there are also some small styling tweaks and new materials lower down on the fascia) there is still a lot of harder, shiny plastic. Apple CarPlay and Android Auto integration are standard across the range and offer a slicker interface than the standard set-up.

The Grandland’s trim breakdown falls in line with other Vauxhall models, following a (thankfully) much more rational Design, GS Line and Ultimate structure than before. 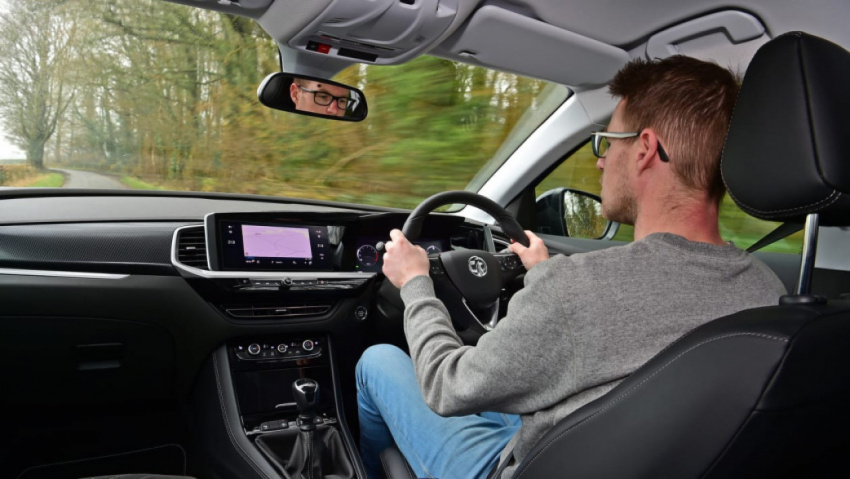 Stepping up to the sportier GS Line model adds £2,260 to the price, as well as a rear-view camera, adaptive cruise, sportier seats, a contrasting black roof and an upgrade of the two seven-inch displays to a 10-inch touchscreen and a 12-inch digital dash.

On the move, the Grandland is reminiscent of its predecessor dynamically. The 1.2 Turbo engine has plenty of torque, at 230Nm for a 0-60mph time of 10.4 seconds when mated to the six-speed manual gearbox. It’s a grunty engine that pulls hard and delivers good flexibility – this is the kind of performance you need in a family SUV, rather than all-out acceleration.

The six-speed manual’s shift action is more positive than we remember, to the point where it doesn’t detract from the driving experience. Refinement is also good, with only the faintest grumble from under the bonnet when you load the engine hard.

The steering is light and pretty much totally devoid of feel, but again, this makes the Grandland very easy to drive. It’s also easy to manoeuvre in tight spots as a result, which will be of more benefit to more buyers than ultimate cornering grip. 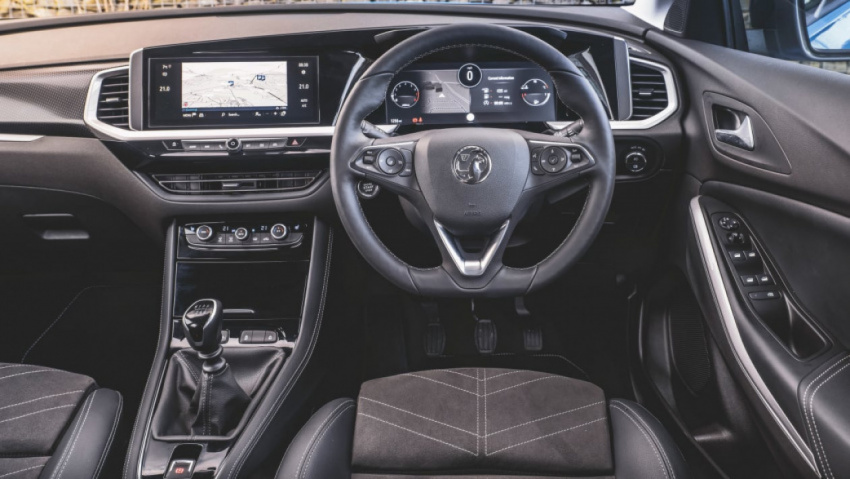 Of course, there’s enough here, and the Grandland feels secure, but the ride – particularly how the rear axle responds to bumps running across the road – is harsher than we’d like. This impacts comfort on a country road or in town, as the chassis does communicate more through to the cabin than we’d ideally like in a car like this. However, at higher speeds on smoother roads it feels settled enough.

Practicality is a positive. There’s no loading lip to lift bags over, with a moveable boot floor that’s flat from the bumper in when set in its higher position, while the seats split 60:40 and a load-through hatch is included for added practicality.

A total of 514 litres of boot space is available, while the Grandland is equally roomy in the rear, which means while it’s not the most spacious in this class when it comes to legroom, there’s still plenty. Headroom is good.

Returning a claimed 44.8mpg and 141g/km CO2 the pure-petrol automatic Grandland’s efficiency is competitive but not ground-breaking so running costs should be affordable – but then if you’re after maximum cost-cutting potential then the PHEV will be a better bet, even if it is more than £4,000 extra.

Here’s where the petrol model comes into its own, because Vauxhall is offering a £1,500 deposit contribution on top-spec Ultimate models, with a four-year deal costing £349 per month based on an 8,000-mile annual limit.

While the Hybrid gets a stronger £2,000 contribution, it’ll cost an extra £50 per month on the same terms, even if Vauxhall is claiming that the total cost of ownership will be roughly equal thanks to its stronger efficiency – if you remember to plug it in.


View more: 2023 Mercedes-Benz B-Class revealed, due in Australia next year

Official distributor, Bermaz Motor, has brought in the updated version of the Mazda CX-3. This timeless compact crossover comes fully imported from Thailand and is available in 2 powertrain variants i.e.  Skyactiv-G 1.5L 2WD Core and Skyactiv-G 2.0L 2WD Core. These models are designed to target buyers of entry-level ...

The insanely popular Toyota Sienta seven-seater MPV is now back in Singapore, and this time it’s even more spacious and practical than ever before. Officially launched by Inchcape Singapore today, the latest generation Sienta now sits on Toyota’s latest TNGA-B platform. The new platform allows for even better joint ...

The (long) wait for the 2022 in Malaysia is nearly over as it’s purpotedly launching here virtually on Tuesday, 18-October 2022, according to dealers nationwide. We’ve been made privy to dealers communicating this to customers. What’s more, said dealers also shared that the MPV will be ready for viewing ...


View more: Dealers: Toyota Veloz to launch in Malaysia on 18-Oct 2022, available at showrooms from 21-Oct

The Mercedes-Benz A-Class bows out of the U.S. after 2022, but the compact sedan and its hatchback counterpart will remain on sale elsewhere, and they’re about to receive some updates. Unveiled on Wednesday, the updates will feature across the A-Class range, including the AMG variants, and also feature on ...


View more: Updated Mercedes-Benz A-Class and B-Class arrive, but not in US

After All Those Smarts We Didn’t Buy, Here’s One We Might (but Can’t)

A quick lunch in Tagaytay with the Jaguar I-Pace

Vauxhall Combo, Vivaro and Movano vans get a range revamp with Prime and Pro models