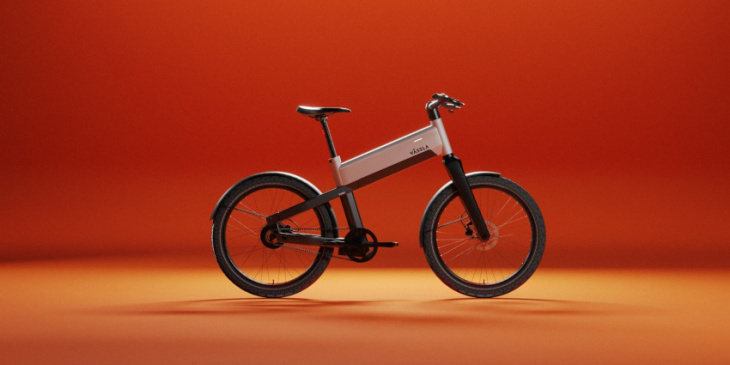 The Swedes have never been one to shy away from bold two-wheeler designs, and the Vässla Pedal isn’t about to change that tradition.

The design is both minimalist and striking, lacking exposed wires or buttons and using a single frame tube instead of a conventional front triangle.

On September 22, World Car Free Day encourages people around the globe to replace their cars with green mobility for one day. The day gives a great opportunity to demonstrate how our cities can look and feel without cars, and how much pollution affects our lives. As Vässla’s mission is for every day to be a car free day, they announce their latest addition to their fleet – the Vässla Pedal, encouraging more people to replace heavy non-environmental friendly vehicles with light electric bikes.

The Vässla Pedal is said be designed as a unisex frame for nearly all rider heights, with the goal of allowing an entire household to share one e-bike.

The 24″ wheels are smaller in diameter than traditional 26″ or 700c wheels, making the bike more comfortable for smaller riders. At the same time, the company says the bike features an “ergonomically designed seat for a comfortable sitting position without putting too much
pressure on wrists and neck.”

Vässla claims the bike’s removable battery is sufficient for 100 km (62 miles) of range. That might sound lofty compared to most throttle-powered e-bikes we typically see in the US, but the pedal assist nature of this e-bike makes it more efficient and helps that battery last longer.

Since throttles are typically not allowed on electric bicycles in the EU, pedal assist is the motor activation method of choice across Europe. In the case of the Vässla Pedal, a torque sensor helps measure accurate rider pedaling force and apply an efficient, responsive motor assist level based on the rider’s own pedaling force.

The rear hub motor is rated for 250W of nominal power — another legally capped performance level — but offers a healthy 45 Nm of torque, which is rather high for small hub motors. The bike features a belt drive with single-speed operation for ease of use and reduced maintenance. The hydraulic disc brakes will also help reduce the maintenance checklist, keeping riders riding instead of wrenching on their bikes.

The Vässla Pedal includes IoT connectivity and comes with an app for digital unlocking, real-time tracking, alerts of theft attempts, and history of bike rides.

The Vässla Pedal is available for pre-order (Sweden only, for now) at a price of €2,990 with deliveries expected to begin March 2023.

Vässla Pedals will be available for subscription in Stockholm, Paris, and Madrid already this autumn, with plans for monthly, half-year and yearly subscriptions starting at €79.

What do you think of the new Vässla Pedal electric bike? Let’s hear your thoughts in the comment section below!