Renault 4 EV’s doors get flush handles, windows are frameless and ORVMs are replaced with cameras 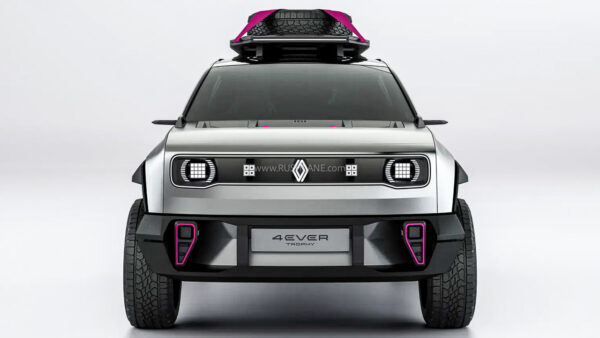 2022 Paris Motor Show is jam-packed with new vehicles. Yesterday, we covered Jeep Avenger from the same event. Renault seems to have finally resurrected one of its OG models for 2022. We’re talking about the Renault 4 which is brought back in an EV form in 2022 known as 4Ever Trophy Concept.

We say Renault 4 is an OG for the company, because it is the world’s first mass-produced hatchback. It is Renault’s first FWD family car as well. In its 30+ years long run, Renault 4 sold over 8 million units. Renault 4 was the successor of 4CV and after its production ceased, was succeeded by the Twingo hatchback.

Keeping the OG Renault 4 aside, 4Ever Trophy Concept is a compact crossover in its DNA. The production-spec model of this vehicle will be closely related to the production-spec model of Renault 5 EV. The latter is set to go into production by 2025. Both of these are based on the CMF-B EV platform. This platform is believed to share half of its components with the existing CMF-B platform. 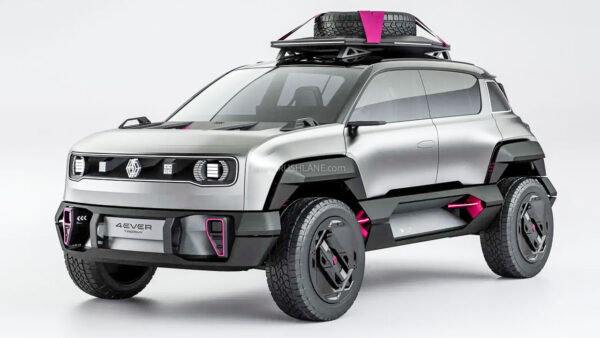 While Renault 5 is a subtle 2-door hatchback concept, Renault 4Ever Trophy Concept is anything but subtle. It gets a ton of crossover elements to make it stand out, especially when compared to Renault 5. For starters, Renault 4 EV gets 4 doors and is a visually larger product than Renault 5. 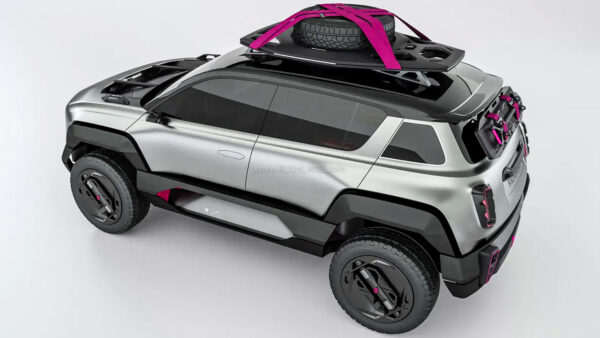 4Ever Trophy gets longer travel suspension which increases the ground clearance quite a bit when compared to Renault 5. Body claddings are chunky and lend it a very muscular stance. Body claddings get pink elements into them and look quite snazzy as well.

When viewed from the side, the doors seem to be above its chunky body cladding, taking the sill height quite extreme. This is highly unlikely to make it to production. Boy-o-boy, it looks beefy. Doors get flush handles, windows are frameless and ORVMs are replaced with cameras. There is a rear quarter glass that should enhance visibility. 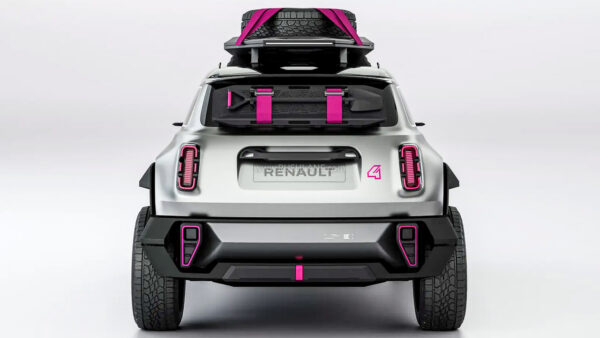 From the front, we can see an illuminated Renault logo. It is flanked by stacked cube-design LED elements surrounded by LED brackets that double up as DRLs. Closer to the illuminated LED logo, we have 4 LED square elements that are likely to be styling elements. To enhance visual appeal, Renault 4 EV also gets a roof rack mounted spare wheel.

Wheels lend a futuristic appeal with what looks like suspension components or dampers of some sort. Production-spec model won’t retain this as it would increase unsprung mass affecting performance. Powertrain details are not revealed. Production is likely to commence in 2024 with deliveries slated for 2025. 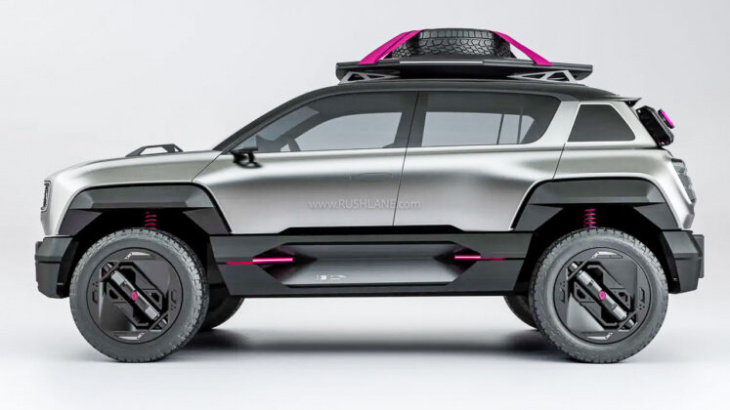 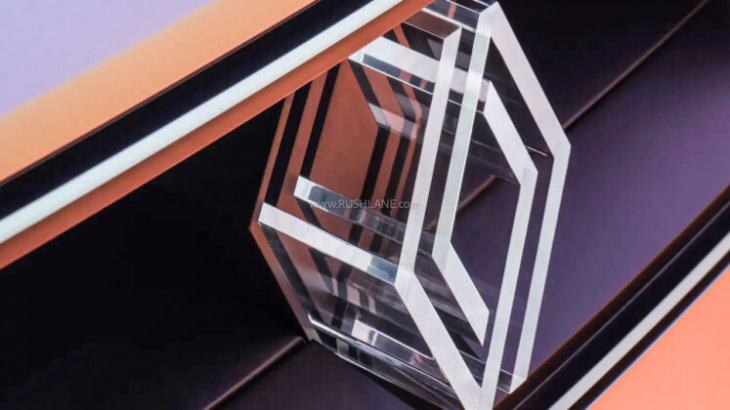 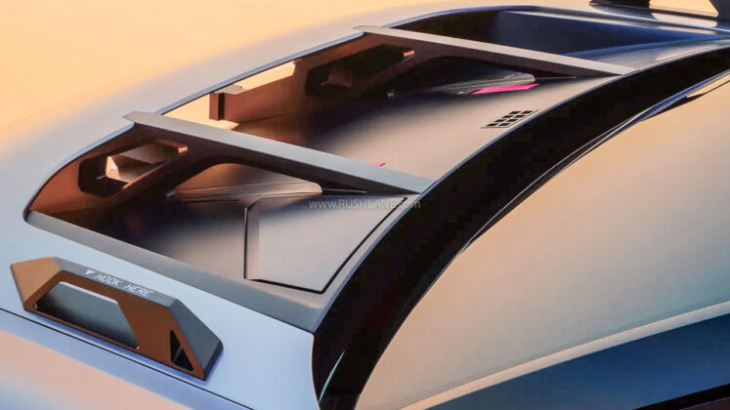 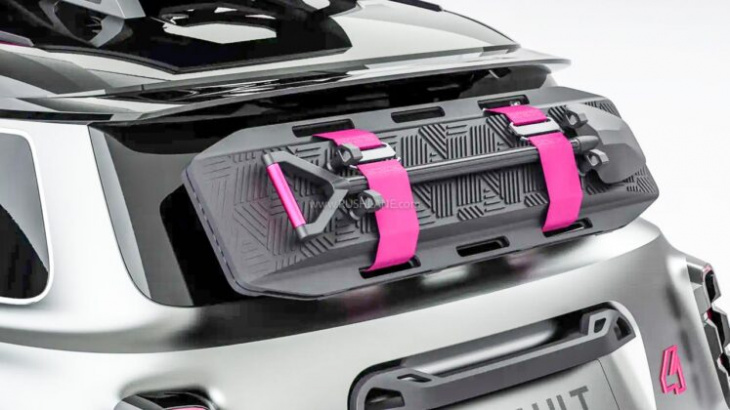 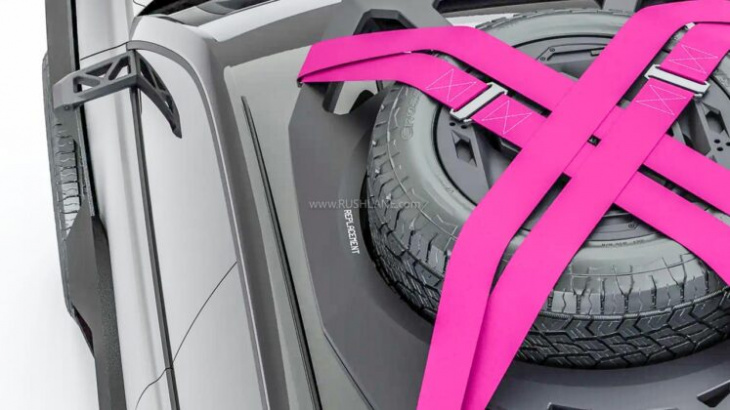 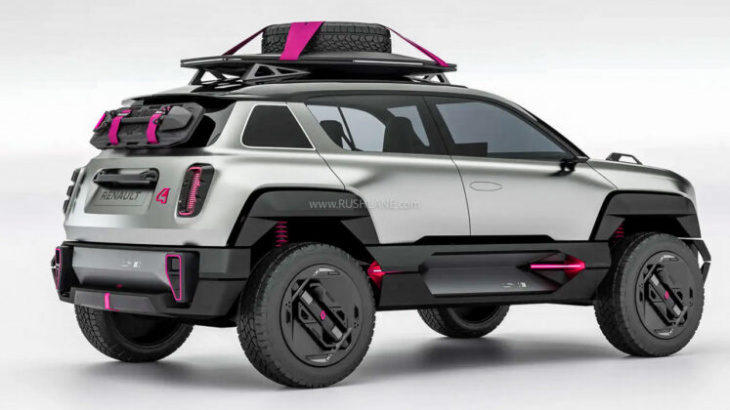