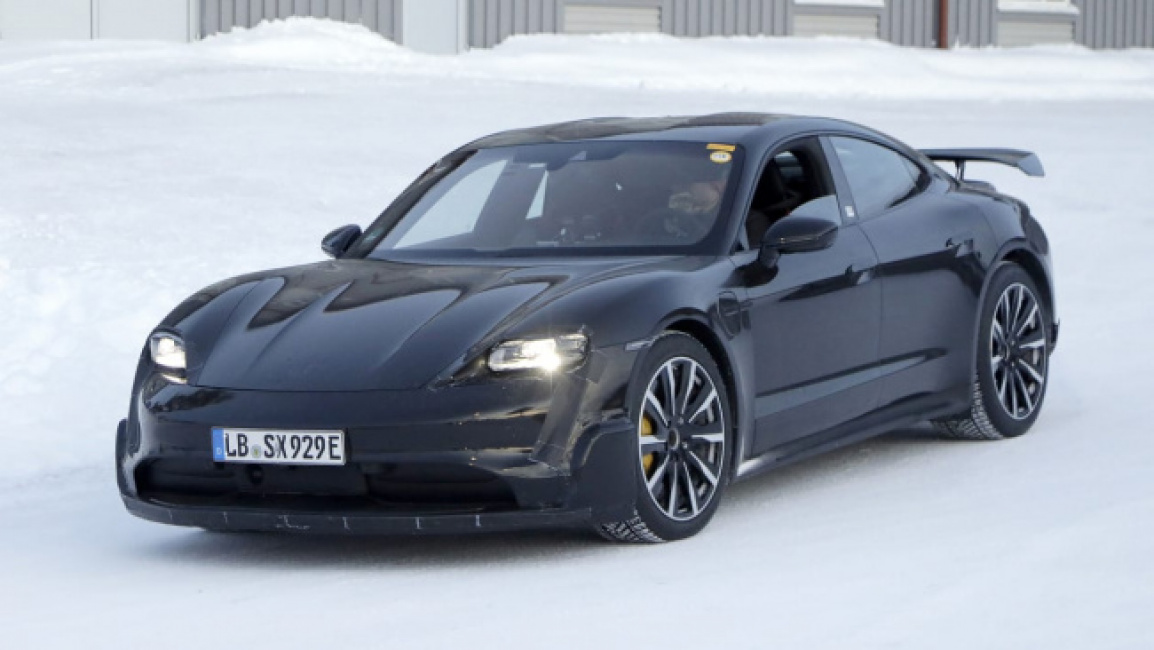 Porsche has already tested its new high performance Taycan model around the Nurburgring and on the public road but now we’ve spied it undergoing winter testing, suggesting a full reveal could happen this year.

Already a record-breaker around the Nurburgring with the Taycan Turbo S, Porsche is planning a new model that will gain even more power from a triple-motor set up and take the fight to the 1,000bhp Tesla Model S Plaid for electric car Top Trumps glory.

Our latest spy shots show us that the new Taycan model will gain plenty of performance-focused exterior modifications. There’s an aggressive front splitter with a greater air intake area to help cool the additional motor and big front brakes. The fixed rear wing and diffuser should work together to provide extra downforce to help put down the power.

We don’t expect these alloy wheels to make it to production – they’re just being used for winter testing purposes. The same can be said for the caged interior – although we know Porsche isn’t afraid of ripping out the back seats in its more track-focused sports cars so this approach might apply to its four-door EV.

A new radar system looks to have been installed behind the windscreen of previous test cars, suggesting that the new Taycan could arrive with an improved suite of driver assist systems. New wheel designs are expected to feature, which should be available on other models later as part of a mid-life facelift.

New trim and upholstery options could be available to lift the cabin, and software changes are likely for the Taycan's triple-display infotainment setup. This comprises a 16.8-inch curved instrument panel, a 10.9-inch central display and a portrait-orientated climate control screen. At extra cost, buyers can specify an additional infotainment screen ahead of the passenger, while software revisions could improve the system's features and responsiveness.

The biggest change will be the powertrain. Porsche’s current dual-motor hardware can only be pushed so far, so to provide over 1,000bhp to take on Tesla, the firm could adopt a triple-motor configuration for the new flagship. This would also unlock precise torque-vectoring capabilities on the associated axle, with the extra power and cornering performance likely to slash the Turbo S’s 7m33sec Nurburgring lap time.

Given the upgrades, we predict the tri-motor Taycan to cost well over the £142,400 Turbo S model’s price tag when it arrives later this year.