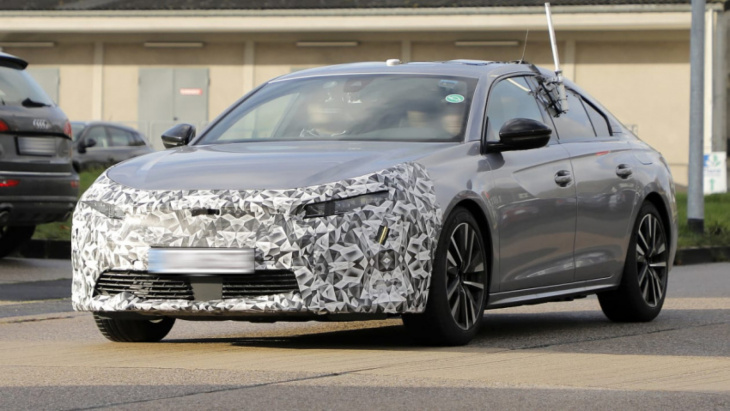 Peugeot looks poised to introduce a mid-life facelift for the 508 saloon next year, based on these new spy shots. The firm’s Volkswagen Arteon rival received a minor refresh for 2022, but a more comprehensive overhaul is in the works to see out the 508’s term.

This prototype car’s bodywork is heavily camouflaged, but it’s possible to pick out its new set of headlights and sharper fang-like LED running lights extending into the bumper. A redesigned front grille could also be in the pipeline, bringing the styling into line with the 308 hatchback.

The 508’s radar sensing hardware appears to remain unchanged in this facelifted model, suggesting that any improvements to its driver assist systems will be software-derived. The wheels fitted to this prototype are the same diamond-cut items currently available, although new designs are expected to arrive as part of the updates.

At the rear, the general architecture will remain the same as the outgoing model, but a new LED running light signature is visible through the camouflage, and Peugeot’s new crest logo will feature throughout. 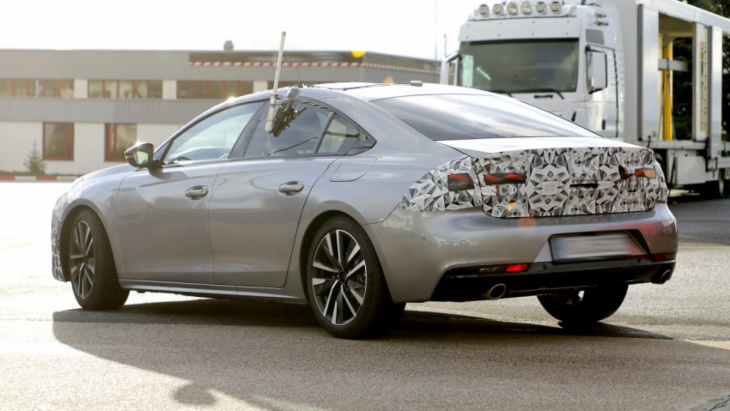 Inside, the 508 will retain its two-tier dashboard design built around Peugeot’s i-Cockpit layout, which uses a small-diameter steering wheel set below a digital instrument panel. A range of new trim and upholstery options are likely to be offered with the revised model, along with an upgraded infotainment system inspired by the 308.

The saloon’s 10-inch touchscreen is likely to remain, but it’ll run Peugeot’s latest user interface and graphics. The brand could also install a lower digital touch panel to access media and navigation functions, as found in the 308.

The outgoing 508 is offered with a choice of petrol, diesel and hybrid engines, and we expect the same of the new model – albeit potentially with minor efficiency and performance improvements. For reference, the current line-up consists of a 128bhp 1.2-litre three-cylinder petrol motor, a 1.5-litre four-cylinder diesel with 128bhp and a plug-in hybrid model, each equipped with an eight-speed automatic gearbox.

The latter uses a 1.6-litre turbocharged four-cylinder engine paired with an electric motor to provide 222bhp. It’s a similar setup to that of the Citroen C5 X and C5 Aircross PHEVs, each of which have recently been updated with improved battery technology for extra pure electric range. The 508 can travel 34 miles from a full charge, and could receive a similar upgrade to push towards a 40-mile figure, dropping the PHEV into the 8 per cent BiK tax bracket.