The latest entry into the Peugeot line-up gets a swoopy silhouette, with a fully electric version confirmed 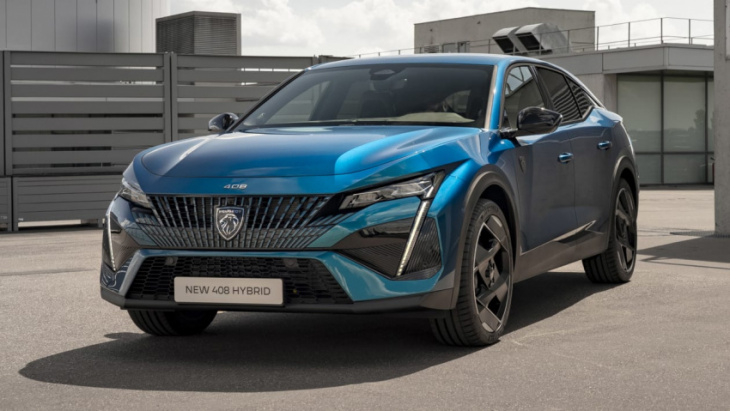 The new Peugeot 408 is now available to order in the UK, costing from £31,050 in entry-level Allure trim with a 1.2-litre petrol engine, and up to £45,000 for a First Edition range-topper with a plug-in hybrid powertrain that emits just 28g/km of CO2.

An all-new model, the 408 is the brand’s attempt to offer car buyers the best of both worlds. While it’s similar in size to a family saloon, it has been given a raised ride height in an attempt to appeal to SUV buyers. Its unique and flowing shape not only adds a sleek look but a large hatchback to improve access to its boot.

This all-new model sits in between the 3008 SUV and the 508 hatchback in the French brand’s line-up. The Peugeot 408 will feature a mixture of petrol and plug-in hybrid powertrains, with an all-electric model set to make its debut in 2023.

Trim levels begin with the Allure model which includes LED headlights with beam assist, ‘dynamic’ front seats, rear parking sensors and a 180-degree reversing camera,  along with a connected navigation system. Styling touches include 17-inch wheels and horizontal chrome accents on the grille. Allure trim can only be specified with a 128bhp petrol engine or the 178bhp plug-in hybrid.

GT models also get 19-inch wheels, but a diamond-cut graphite design helps the GT stand out from the rest of the range. Aside from its GT badging and minor styling tweaks, the GT adds a heated leather steering wheel and a 10-inch instrument display with ‘3D’ technology. The driver can also select to digitally enhance the sound of the vehicle with selectable driver modes.

Finally, the limited run of First Edition models gets 20-inch diamond cut wheels, an upgraded 7.4kW on-board charger, a 10-way adjustable driver's seat and a passenger seat that moves in six directions. Both front seats are also heated and have a massaging function.

There is roughly an £8,000 premium to opt for the plug-in hybrid model over the standard petrol engine. Although company buyers may be swayed to opt for the more expensive plug-in model thanks to its 8% BiK (Benefit-in-Kind) rate, compared to 32% for the petrol. The First Edition is only offered as a plug-in model, but its BiK band creeps up to 12%.

The 408 is very close in concept to the Citroen C4, which is also owned by parent brand, Stellantis. Other rivals in this niche segment include the Renault Arkana and the more premium DS 4. 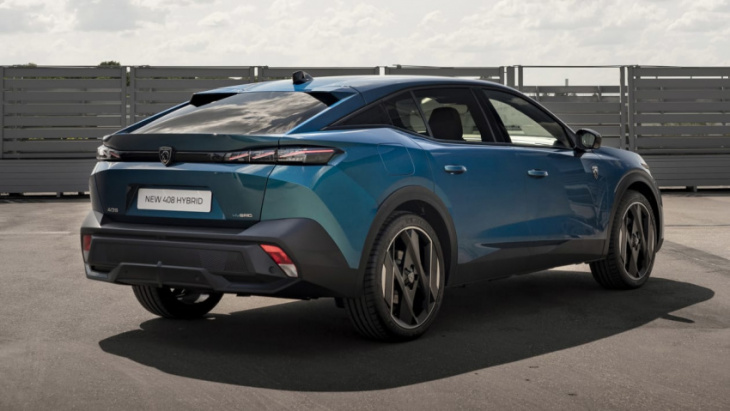 While the Peugeot 408 seems like an odd concept on paper, the French marque’s designers have done wonders to create a stylish and cohesive design. Like all current Peugeot models, the front of the car is identifiable by its fang-shaped daytime-running lights – a nod to the lion on the brand’s emblem. All things considered, the 408 looks very similar to the smaller 308 from this angle.

More drastic changes can be seen in profile, however, as the 408’s unique shape becomes apparent. The 408’s wheelarches are bolstered by plastic body cladding in order to give it a more rugged appearance, and the rear is characterised by a steeply raked tailgate window. This hatchback is flanked by LED taillights that are designed to symbolise a lion’s claw.

Measuring up at just under 4.7m long, the 408 is slightly shorter than the 408 saloon, yet it is over 3cm longer than the 308 on which it’s based. Despite its raised ride height, it measures under 1.5m tall, which should come as a benefit to aerodynamic efficiency. 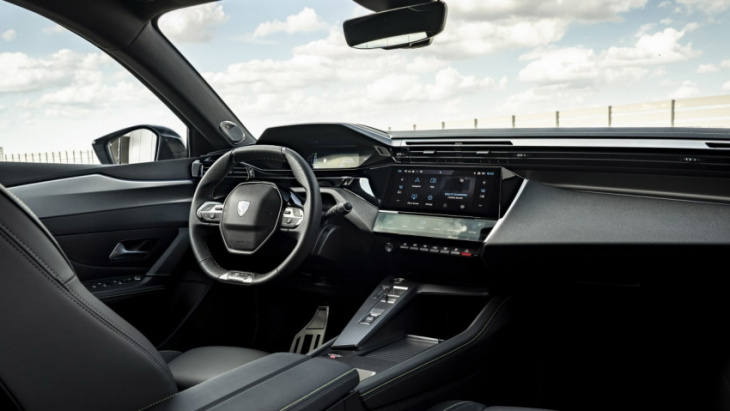 Peugeot has created some of the most striking interiors of the past few years, and the new 408 appears to continue that trend. Its cabin features the brand’s i-Cockpit digital instrument cluster, which sits above an unusually small, square steering wheel; the aim is to provide a much clearer view of the dials and the road ahead.

Alongside the i-Cockpit is Peugeot’s i-Connect infotainment system. Just like in the 308, this is split up into two individual screens: a main 10-inch touchscreen and a smaller angled touchscreen that displays several shortcut ‘buttons’. Unfortunately, Peugeot has buried the climate controls inside the infotainment system, something that can be difficult to adjust while driving.

Despite the 408’s mid-level positioning in the line-up, Peugeot claims it will offer the most rear legroom out of any of its models; however, we are yet to see whether the car’s sloping roofline will have an impact on headroom. The 408’s hatchback tailgate provides easy access to its spacious 536-litre boot, which is on par with what is found on the larger Citroen C5 X. Plug-in hybrid models will offer up slightly less space at 471 litres, however those requiring more can fold down the rear seats to open up a total of 1,611 litres of room. 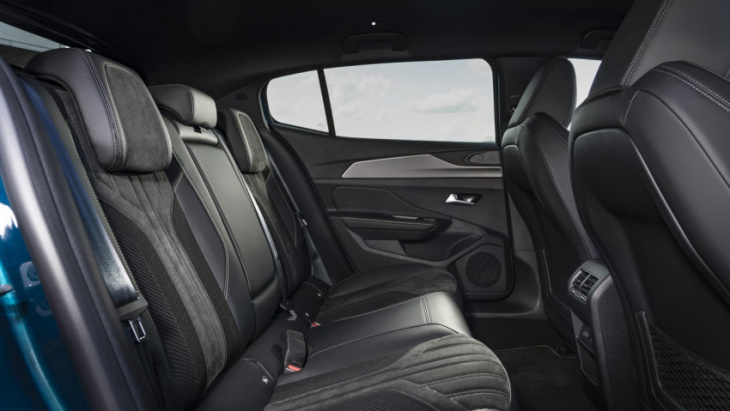 At launch, the new 408 will be available with two types of powertrain: petrol and plug-in hybrid; both of these will be equipped with an eight-speed automatic gearbox as standard. The petrol option sits as the entry point into the range and comprises a 1.2-litre turbocharged three-cylinder with 128bhp. However, this option will be short-lived because Peugeot has confirmed that it’ll be replacing it with a more efficient mild-hybrid before the end of 2023.

Next up are the PHEV models which utilise the same 1.6-litre four-cylinder petrol engine and electric motor set-up as the 308, which produces either 178 or 222bhp depending on specification. Both models’ electric motors are powered by a 12.4kWh battery.

What Peugeot has confirmed, however, is that an all-electric version of the 408 will be coming a few months after launch. Likely to be dubbed the e-408, this model will share its parts with the upcoming e-308, giving it a range of more than 200 miles. Yet, given the 408’s extra bulk over the hatch, it could be fitted with a larger battery, allowing for a longer range between charges.

What does this mean for car buyers?

In such a rapidly changing car market, manufacturers are scrambling for ways to find niches in order to draw in new customers. The 408 is a great example of this since it blends the high riding position of an SUV with the sleek looks of a saloon or hatchback. Of course, you’ll have to pay for that and the 408 looks to be more expensive than the even more practical Peugeot 308 SW. Nonetheless, the demand for SUVs remains high and the 408 is likely to sell well if Peugeot can offer competitive finance deals; the plug-in hybrid variants are sure to be a hit with company car drivers, too.