If you regularly need to tackle longer journeys, this is the Nissan Ariya for you. It should offer a good 50 miles more per full charge than the 63kWh edition, and it has all of the same strengths and appeal that brought that version our top car award. But the price premium is hard to overlook; many buyers could be better off saving the £6,000 and resorting to the occasional extra public charge.

When is a flagship not a flagship? That’s the question that you might ask yourself when considering an electric car – and it’s certainly a quandary that applies to our current Car of the Year, the Nissan Ariya.

Our initial verdict on the all-electric SUV was based on a version with front-wheel drive, 215bhp and a 63kWh battery. But since then, the Ariya’s range has expanded to include larger batteries and more powerful motors, including a supposed range-topper with four-wheel-drive e-4orce technology. If you want, in fact, you can spec the Nissan up to a creation with an 87kWh battery and 302bhp – and there’s a more potent Performance edition coming with 389bhp.

And yet, good though the initial Ariya line-up was, the car we’re driving has the potential to raise its bar even higher. It’s the 87kWh Evolve, which mixes the larger battery capacity with just a single front-mounted motor that produces 239bhp. 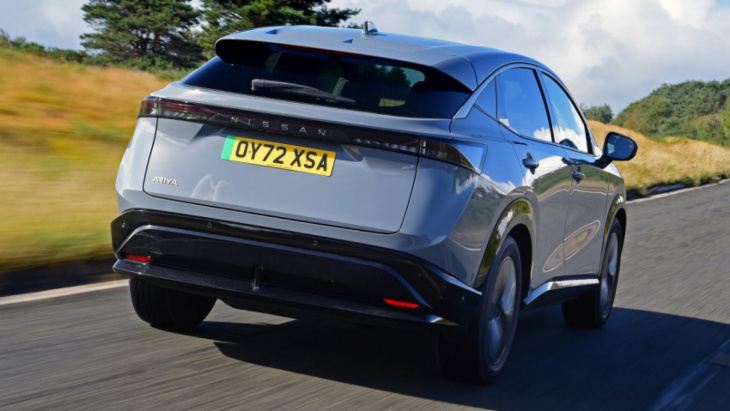 That’s more grunt than you get with the 63kWh edition, although the increased weight means that performance is roughly the same. But those extra cell packs deliver a WLTP combined range of 322 miles, more than 70 miles further than the version that clinched our title, and slightly up on even the top-whack dual-motor model.

You’ll pay for this extra capacity, of course; matching trim levels, the 87kWh costs £5,750 more than the 63kWh. And you won’t quite get that mileage figure in the real world, either. But based on our mix of urban driving and some shorter motorway runs, this is still an EV that could well deliver the magic 300 miles of range.

That stronger motor means that you never feel like you’re in something that’s carrying extra battery cells, and the throttle is nicely modulated. It pushes the Ariya’s chassis to the limit at times, mind; applying full power, even in the car’s normal mode instead of Sport, can light the front tyres on all but the grippiest, driest surface. The brake pedal can feel a little snatchy at first, but before long you’ll spend most of your time around town driving smoothly with Nissan’s ‘e-Pedal’ single-pedal mode anyway.

The overall suspension set-up feels composed; with a few extra kilos on board, this Ariya is well tied down, with firm suspension that does a decent job of isolating road scars from the cabin. Its weak spot is sharp imperfections at higher speeds, which can get through enough to jiggle occupants around. Light but positive steering and solid electric-motor refinement complete a rounded package that bodes well for subsequent models coming on the Renault-Nissan Alliance’s CMF-EV platform. 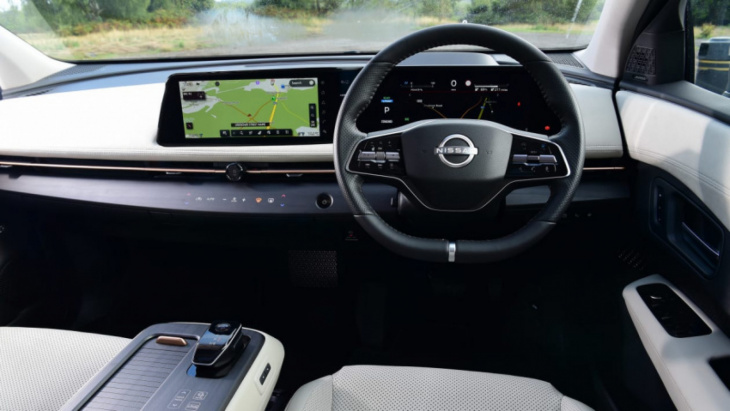 The rest of the basic packaging is as compelling as it is on Ariyas with smaller batteries. The coupé-SUV shape doesn’t deliver the largest boot in the class, but it’s still a fair size, at 466 litres.

There’s a shade more rear cabin space in the Nissan than in a Kia EV6, making this a surprisingly practical five-seater, given the Ariya’s swoopy roofline.

Evolve trim, meanwhile, brings a few extra features over the entry-level Advance. The electric panoramic sunroof allows an impressive amount of light into the cabin, the 10-speaker Bose audio system packs a decent punch and the mix of synthetic leather seats and microsuede finish on the door linings and dash give the Ariya a really premium feel to help justify its £53k price.

You also get a smart key that ties down settings for everything from the seats to the mirrors (useful) and a 22kW three-phase AC charger (less useful for most UK buyers).

Nissan and Premcar are working on a possible Warrior version of the Patrol Nissan believes there’s more room to expand its range of locally-modified Warrior line-up – but ruled out chasing Ford’s Ranger Raptor with a V8-powered Navara. Nissan Australia teamed up with Premcar, the local engineering firm that ...

The shadowy teaser is surprisingly revealing.