Electric or combustion, we'd love to see an Eclipse successor. 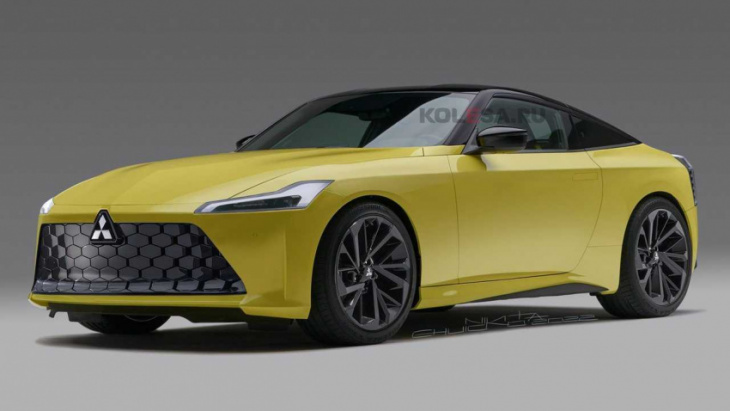 The original Mitsubishi Eclipse was released in 1989 and the first two generations of the sports car were developed during the Japanese firm’s close relationship with Chrysler Corporation. The third-gen model also shared its platform with products from the American company and it wasn’t until the final fourth generation that an in-house built architecture was introduced. The Eclipse MK4 was launched in 2005 and remained in production until 2011 when the nameplate was discontinued.

Mitsubishi is now part of a large conglomerate, which also includes Nissan, Renault, and other brands. With the current level of platform sharing within the Renault-Nissan-Mitsubishi Alliance, it won’t be a huge surprise if Mitsubishi is given access to Nissan’s RWD platform, which underpins the new Nissan Z. With this idea in mind, our colleagues and friends at Kolesa.ru produced the exclusive renderings you see attached below, previewing a potential fifth generation Eclipse.

Obviously, the digital drawings are based on the new Z sports car. However, this looks like more than just badge engineering as the front fascia now features a completely new design. The headlights and grille appear to be inspired by the recently unveiled Mitsubishi XFC concept. The rear end with its T-shaped taillights shares more components with the crossover prototype but we have to admit those clusters look good on the sports coupe.

Speaking of crossovers, it’s worth mentioning that Mitsubishi resurrected the Eclipse name with the Eclipse Cross crossover, which took a position between the Outlander and Outlander Sport in the company’s portfolio. However, that car has nothing in common with the Eclipse coupe and is not even produced in the United States.

Back to the renderings attached above, Kolesa.ru envisions the resurrected Eclipse as potentially using an electric powertrain. Alternatively, it could feature a modified version of Nissan’s 3.0-liter V6 turbo engine from the Nissan Z, mated to a nine-speed automatic gearbox. Of course, this is all just speculation.

Mitsubishi’s new Outlander PHEV carries on the tradition of the brand’s all-wheel-drive prowess, powered by electric motors and offering the option of fuel-free driving.

How affordable is the Nissan Leaf in Florida? What determines the affordability threshold? Why would the Nissan Leaf be so expensive for Florida residents? Nissan has one of the cheapest electric vehicles on the market, the Leaf. But, if you break down affordability by state, you’ll find that Florida ...


View more: Owning a Nissan Leaf in Florida Is Way More Expensive Than It Used To Be

2023 Mitsubishi Mirage: Is it Fast and Luxurious?

My Mitsubishi i-MiEV Is a Secret Track Weapon

Pajero Sport gets updated for 2023