AMG’s going into battle against the M3 with four cylinders, a plug and a serious firepower advantage 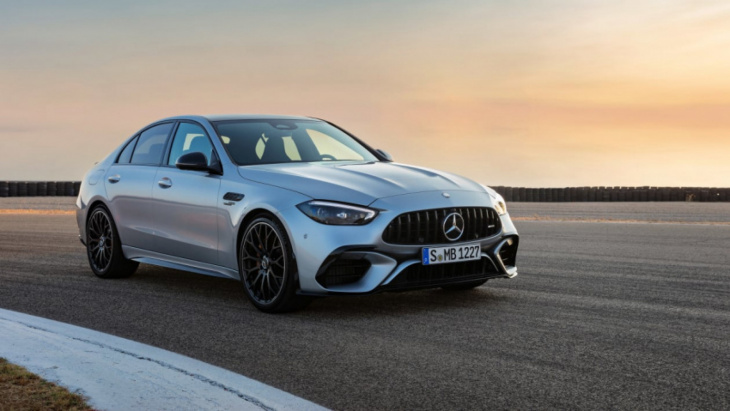 Mercedes-AMG has now revealed full details of its highly-anticipated C63 S E Performance. A replacement for one of AMG’s most popular models, the new C63 breaks markedly with tradition by dropping the familiar V8 for a new hybrid powertrain that features a four-cylinder turbo engine and electric motor. AMG admits it can’t hope to recapture the emotion of its old V8s, but claims that in all other respects it has produced a significantly more capable and exciting vehicle – one that leverages its recent successes in F1, and that also looks forward to the era of electrification. Perhaps it is no coincidence that it is the first AMG road car to replace the Mercedes-Benz bonnet badge with that of AMG’s own.

We’ll get into more detail about that spectacular powertrain below, but the key figures are quite shocking, with total system outputs of 670bhp and ‘a minimum’ of 752lb ft. Those numbers put the new C63 S E Performance in a completely different league to typical compact sports saloon rivals like the 503bhp BMW M3 Competition or Alfa Romeo Giulia Quadrifoglio. To harness that extraordinary power AMG has equipped the C63 with both four-wheel drive and rear wheel steering (customer feedback showed that quite a few found the old V8 rear-wheel drive car too much of a handful already).

Predictably, there is a downside to so much engineering hardware, and in the case of the C63 that is weight. Tipping the scales at 2111kg, it’s a significant 456kg heavier than the Alfa Romeo, and 301kg up on even the heaviest M3 Competition with xDrive. Against the stopwatch AMG quotes a ferocious 0-62mph time of 3.4sec, making it quicker than all key rivals (albeit only 0.1sec in front of the M3 xDrive), topping out at 155mph or 173mph if fitted with an optional AMG Driver’s Package.

UK-market prices and specifications are still to be confirmed, but for now read on for all you need to know about the new C63 and AMG’s new era of electrification. 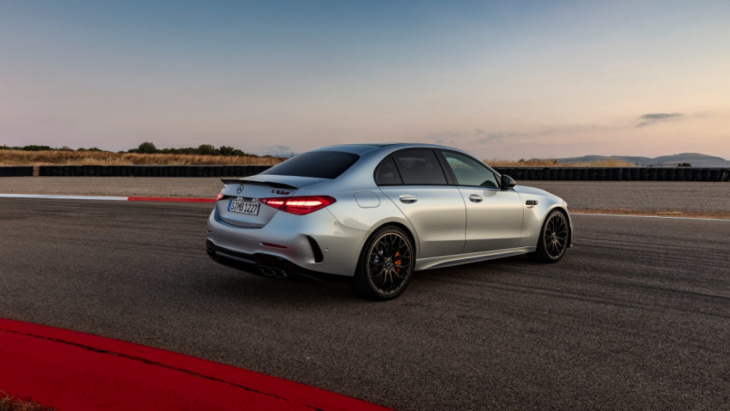 As noted above, the Mercedes-AMG C63 S E Performance has a total system power of 670bhp, with 752lb ft of torque. These figures are generated – in simple terms – by two main elements: a petrol-powered four-cylinder engine up front, and an electric motor mounted on the rear axle. While it’s not wholly unusual to see this type of mechanical layout on modern hybrid vehicles, it’s the complexity through which these two power sources are managed and connected that makes the Mercedes system stand out.

The petrol engine is a development of the M139l unit currently found in the A45, and more recently fitted to the C43. As the little ‘l’ in its moniker suggests, it’s mounted longitudinally up front and generates the bulk of the C63’s system power. Peak figures for the engine are an astonishing 469bhp at 6725rpm with 402lb ft produced at a heady 5250-5500rpm, making it the most powerful series-production four-cylinder petrol engine in the world. 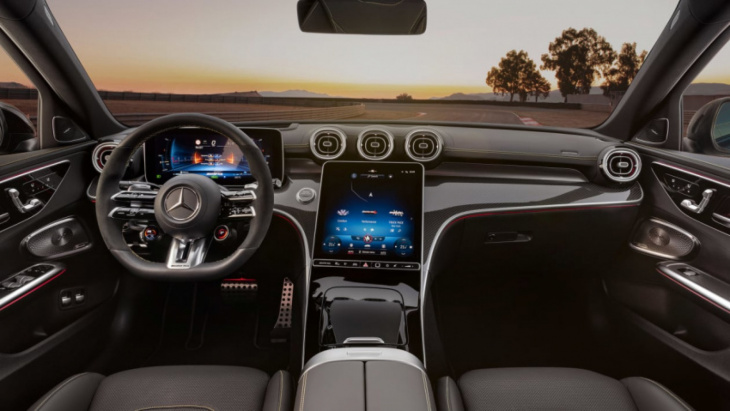 To reach those figures, AMG has fitted a much larger turbocharger compared to the one in the 43 models. Like those cars, however, the unit features an electric motor integrated right into the housing. This allows the turbocharger to spool electronically, effectively eliminating turbo lag and improving throttle response.

The engine also has a belt-driven starter motor and generator that powers the car’s ancillaries, but differs from the setup in most current Mercs by not running on a seperate 48V electrical system. Instead, the engine’s ancillaries and that electric turbocharger are now integrated right into a 400V electrical system that supports the high-voltage loads of the C63’s hybrid system.

This is where the second element of the C63 S E Performance’s powertrain comes in, as mounted on the rear axle is an AMG-designed electric motor that’s equipped with an electronically-actuated two-speed transmission and an electronically-controlled limited-slip rear differential. The permanently excited synchronous electric motor produces 201bhp and 236lb ft of torque, and is powered from a 6.1kWh battery pack that’s mounted above this hybrid module on the rear axle. The complete hybrid system weighs around 250kg, with the battery pack weighing in at 89kg. 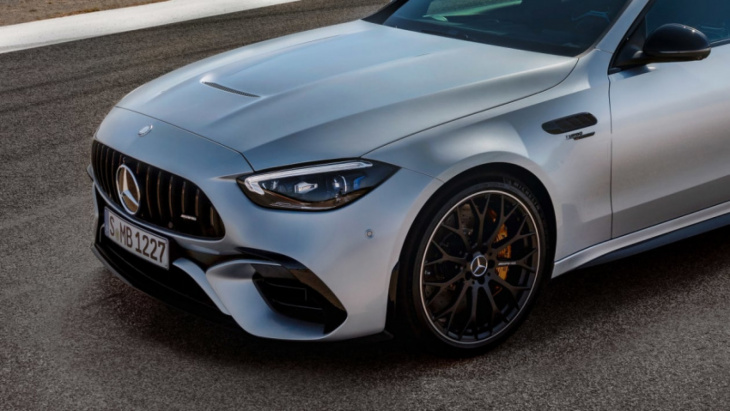 The battery pack is also completely unique to AMG, and has been designed specifically for high performance applications, rather than electric range (8 miles, if you’re wondering). It has a discharge capacity of 70kW at constant use, with a 150kW overboost function for 10 second bursts. The two-speed transmission is electronically actuated, and will only slip into its high gear at speeds of over 86mph. Power from the rear hybrid module is sent directly to the rear wheels, where it joins drive from the combustion engine which has travelled through AMG’s wet-clutch nine-speed automatic transmission mounted off the back of the engine.

It’s here at the electronically-controlled rear differential that the two drive sources meet, but don’t necessarily stay as the C63 S E Performance also features a mechanical all-wheel drive system that’s able to send this blend of drive back up to the front axle via a secondary prop shaft and front-mounted driveshafts.

Of course the reason for all this change is improving the C63’s eco credentials and fuel economy is rated at 40.9mpg on the combined cycle. The high discharge and recharge rates of the battery means that owners won’t have to plug the car in, with AMG claiming this would mainly only be for pre-conditioning the car’s interior in extreme weather. 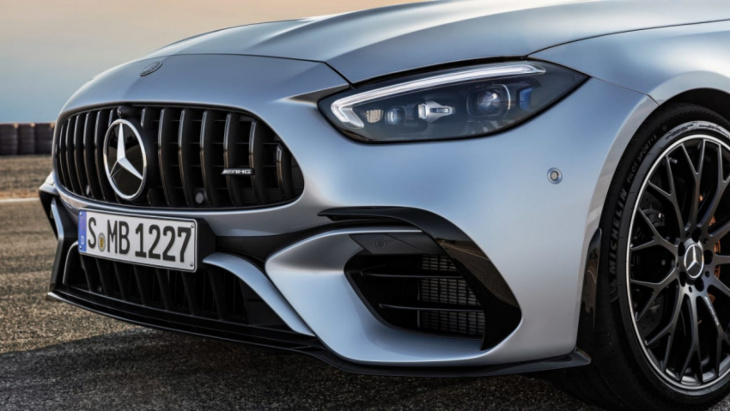 With so much mechanical hardware, AMG has gone to some lengths in order to squeeze it all in the C-class’s relatively compact body. Like C63s before, the W206 saloon and estate share their basic side pressings with lesser C-class models, doing without BMW M3-style flared arches on the rear axle. But from the A-pillar forward, things are very different. AMG has lengthened the C-class’s nose by 50mm, widened it by 73mm and increased the wheelbase by 10mm. 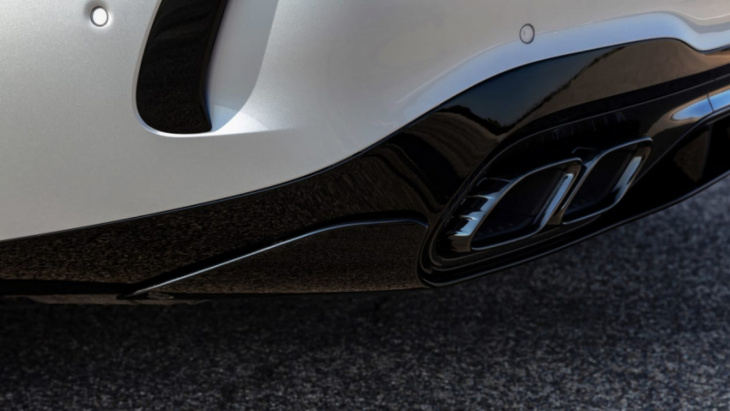 The suspension is a coil spring setup with adjustable and constantly variable dampers at each corner, and there’s standard-fit rear-axle steering with a 2.5deg maximum turning radius that turns in an opposite direction to the front wheels below 62mph, and with them over that speed. AMG’s fitted a standard composite braking package with six-piston calipers up front and single piston units on the rear, and there’s a regenerative braking system integrated in there too.

The exterior design is perhaps the most restrained element of the C63, with a relatively subtle approach that integrates lots of AMG’s current design elements onto the W206-gen C-class. The longer and wider front end is the most obvious change, as well as the bespoke bonnet that features a subtle slip vent between its iconic power domes – not strictly necessary, but customer feedback was for more aggressive design elements than in the past. AMG is offering a standard 19-inch wheel and tyre package, but 20s are an option. 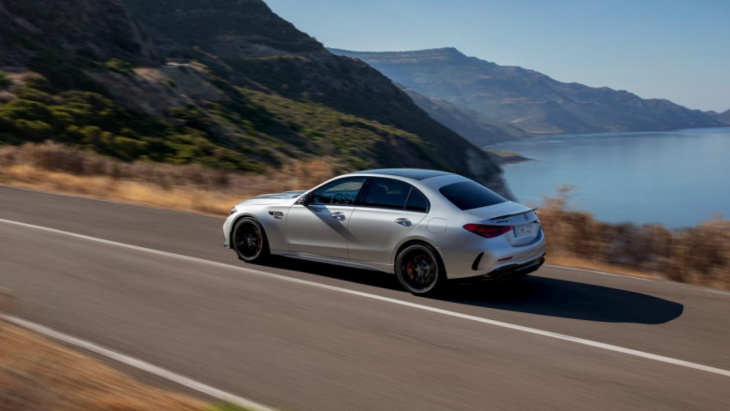 Driving the EQS 580 4Matic Range and Charging Ride and Handling There’s no denying the fact that this is a large and heavy car, but with the weight low down and the suspension and steering tech, the EQS is a lot more fun than the luxury S-Class and the ...

The EQV, Mercedes-Benz’s first all-electric MPV, has been launched in Singapore, and with it comes practicality, functionality and luxurious mobility with zero emissions.  As part of its push towards greater electrification of its model range, the EQV is the electric variant of the ubiquitous V-Class, which already built its ...


View more: The New Electric Mercedes-Benz: The EQV Has Arrived In Singapore