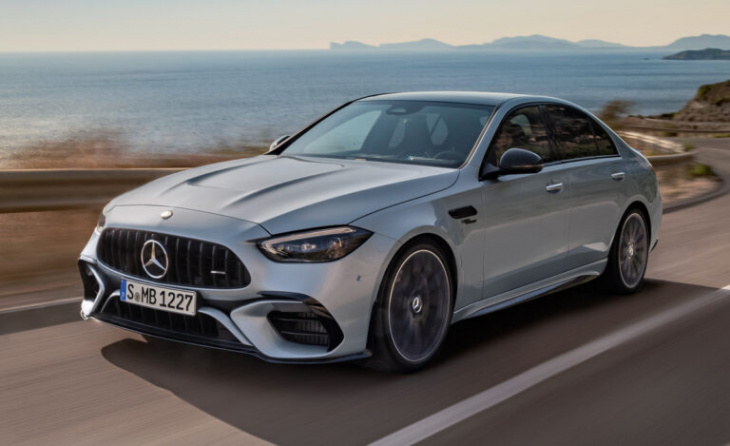 The new car sports a hybrid powertrain, utilizing a four-cylinder engine in tandem with a rear-mounted electric motor.

Mercedes-Benz South Africa has yet to reveal the local pricing of the new model yet, but the company did confirm that it will be available at domestic dealers from the first quarter of 2023.

The powertrain in the new C63 stems from the technology found in AMG’s Formula 1 hybrid race cars.

To this end, the vehicle is fitted with a small 6.1kWh battery weighing just 89 kilograms, which is capable of producing an average of 70kW and a maximum of 150kW when the car is pushed to its peak.

Charging this battery is handled by a 3.7kW onboard charger, and it has enough capacity to allow for 13km of pure electric driving.

As for the engine, a 2.0-litre petrol unit is employed which delivers a considerable 350kW and 545Nm, making it the most powerful four-cylinder in the world, according to Mercedes.

A nine-speed multi-clutch gearbox is then used to send this power to the 4Matic all-wheel-drive system.

When all this is put together, the new AMG generates a monstrous 500kW and 1,020Nm, making it capable of sprinting to 100km/h in 3.4 seconds and topping out at an electronically-limited 250km/h, which can optionally be lifted to 280km/h.

Additionally, eight driving modes are included, which are Electric, Comfort, Battery Hold, Sport, Sport+, Race, and Slippery, and choosing one of these modes determines how much boost the electric motor will provide.

Modes such as Battery Hold and Comfort will limit the motor’s output to preserve the charge and cap the vehicle’s performance, while the various sport modes will vary the amount of battery used, with 65% for Sport, 80% for Sport +, and 100% for Race, while also changing the car’s handling properties and throttle response.

Furtherenhancements then consist of a new rear axle and high-performance fade-resistant brakes. 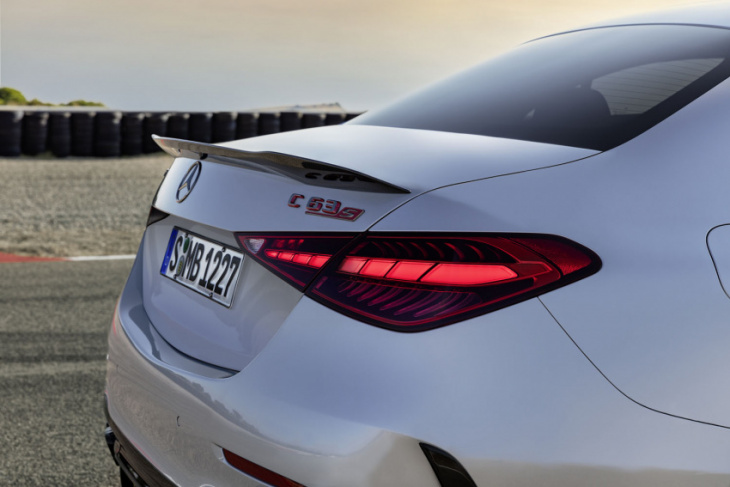 The new C63 differs from the other models in the Mercedes-Benz C-Class with its larger, more muscular proportions.

The front end is 50mm longer and the front wings have been made wider, making the saloon a total of 83mm longer than its standard counterparts.

Likewise, the front axle is 76mm longer and the wheelbase itself has increased by 10mm.

New side skirts, a narrow air outlet in the bonnet, and a rear diffuser then assist with aerodynamic performance. As standard, the Mercedes is also sold with 19-inch alloy wheels, but the option exists to switch to larger forged 20-inch rims.

Inside, the upholstery sees a stylish stitching pattern, and buyers can opt to install AMG’s Performance seats at additional cost.

The AMG is also equipped with the brand’s MBUX multimedia system which now allows the driver to check on the hybrid-specific functions of the vehicle.

This information can also be shown on the digital driver display or through the optional heads-up display. 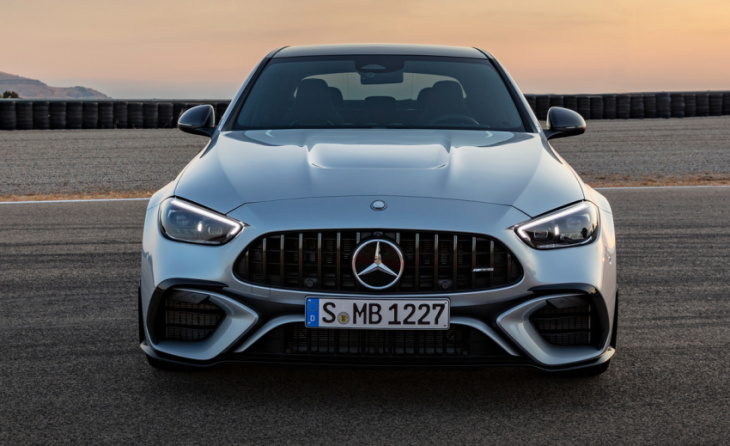 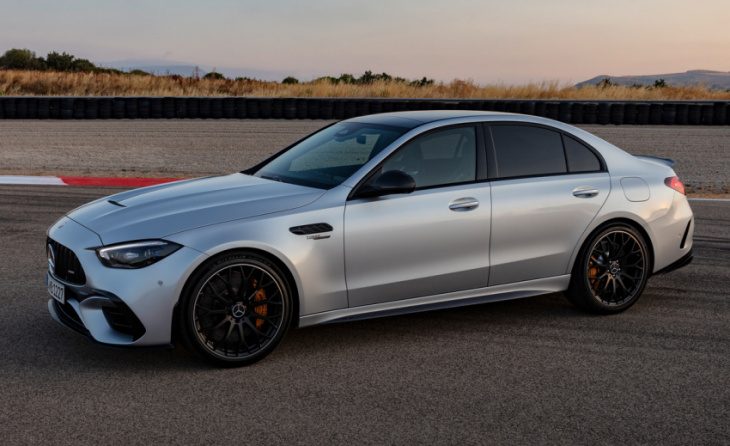 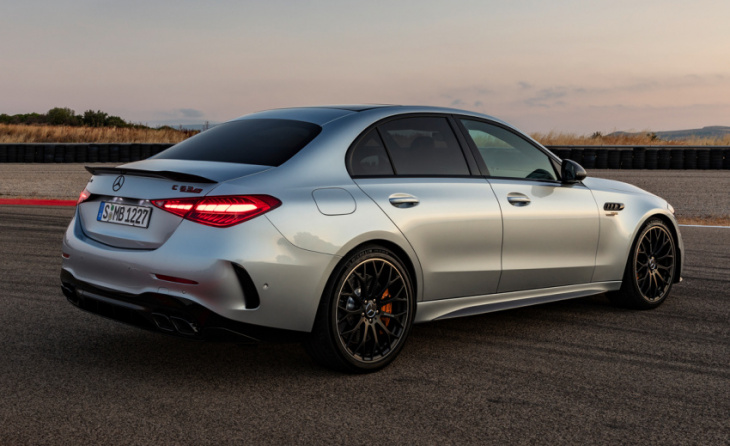 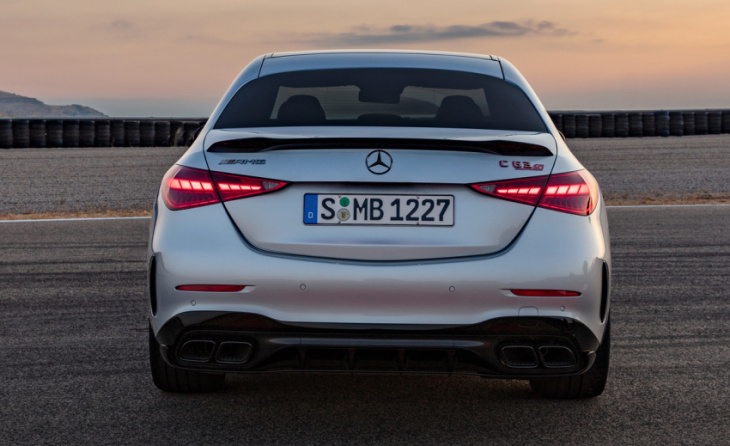 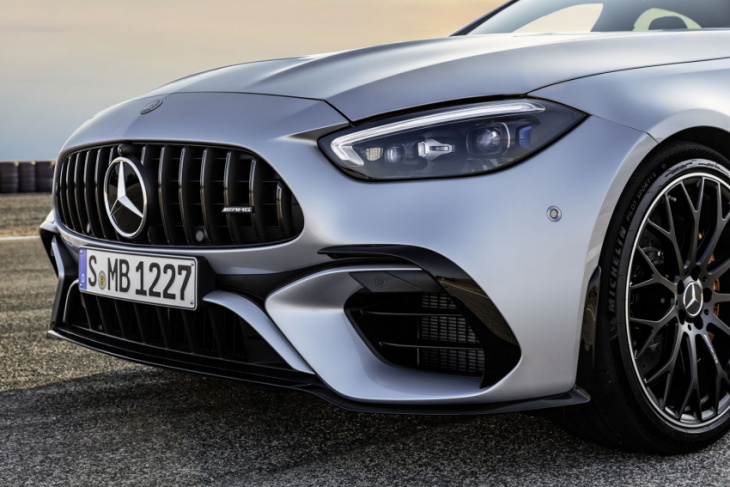 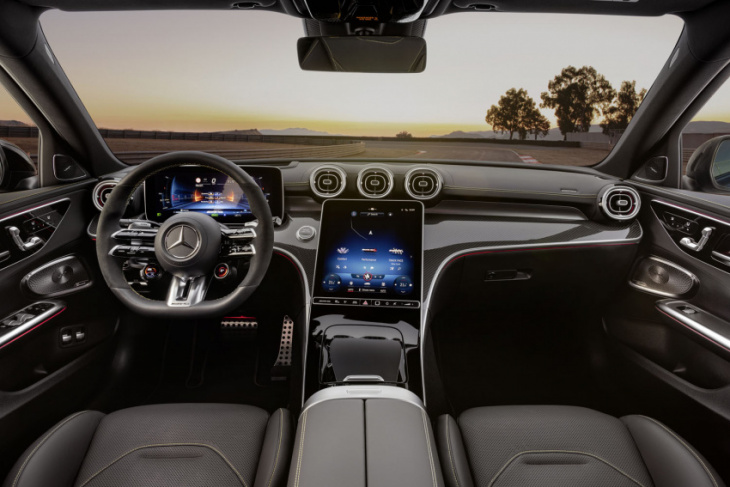 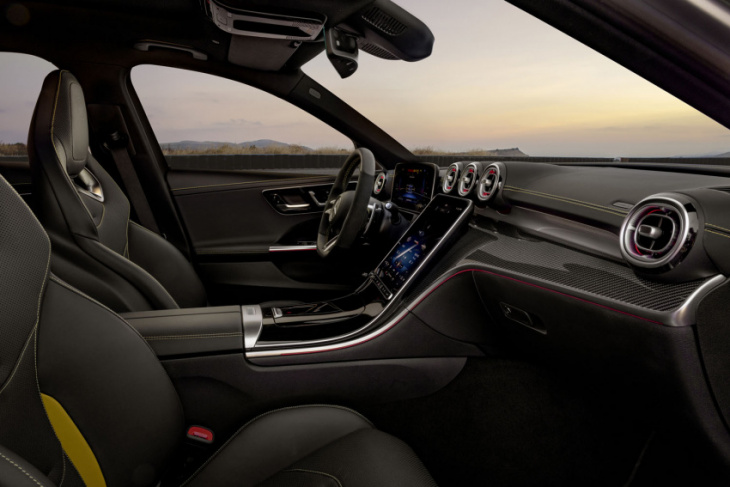 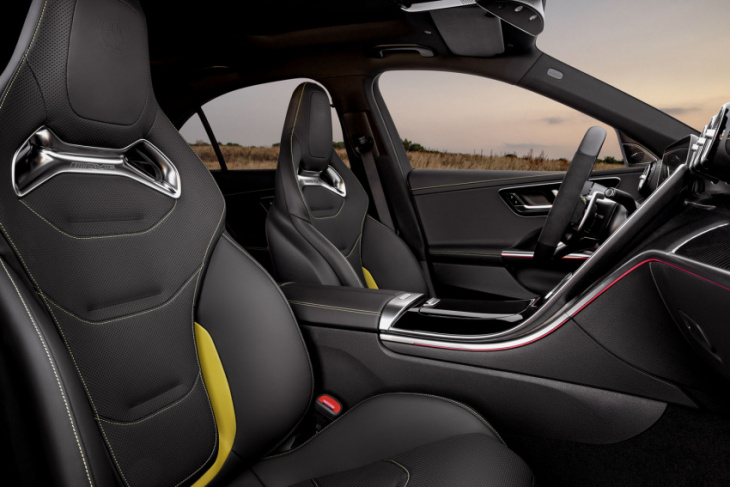