The new Mercedes-AMG C63 S E Performance has been revealed and it could be the most controversial AMG yet in the eyes of enthusiasts. If the name wasn’t a big enough clue, yes this is a hybrid, but that’s not the big news. The kicker is that this C63 trades its characterful V8, for a turbocharged 2.0-litre four-cylinder engine. 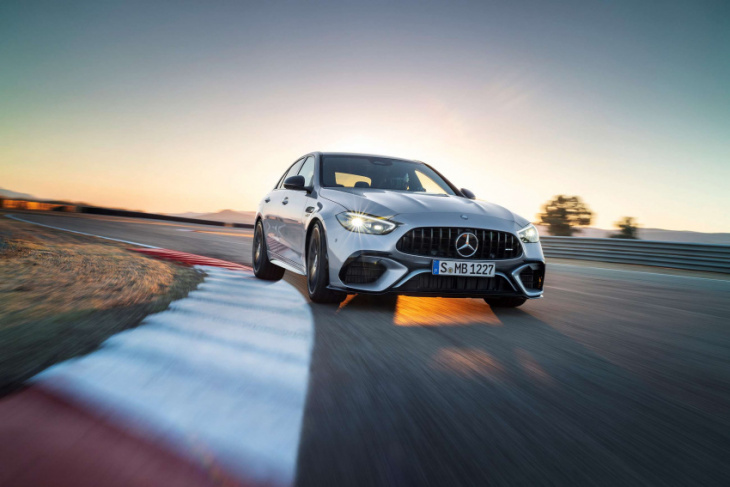 At the very least, the four-cylinder engine in the new C63 is a highly impressive feat of engineering. With 476PS (350kW) it will be by far the most powerful production four-cylinder engine on sale, producing the same power give or take as the 4.0-litre V8 in the old non-S C63 AMG. That’s thanks in part to a larger turbocharger, featuring an electric motor to spool the turbo independently of gas flow for improved response.

It works in tandem with a new AMG-designed two-speed electric motor on the rear axle, which is fed by a relatively small 6.1kWh battery. This is a deliberate move on Mercedes-AMG’s part, as this system has been designed to swiftly deploy and replenish its electric power, with F1 know-how employed in its creation. The downside? A mere eight-mile electric-only range, though as this is a so-called ‘performance hybrid’, Mercedes-AMG says EV-only isn’t really what this is designed for. They even claim that plugging in is only really necessary for pre-conditioning the car’s cabin in extreme temperatures. 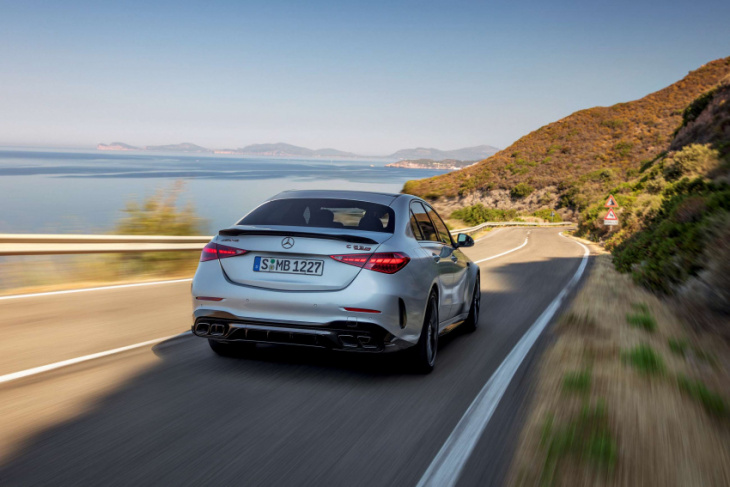 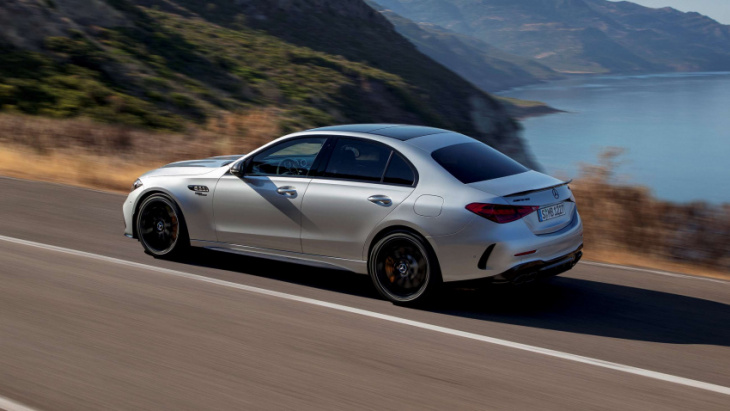 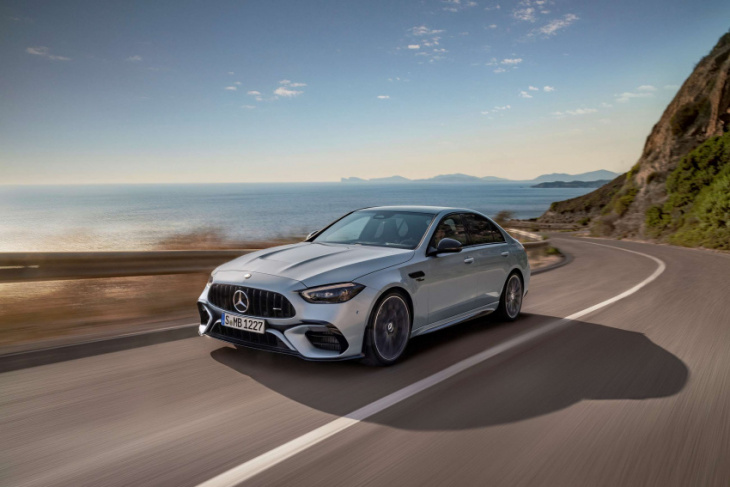 The result at any rate is a monster combined power output of 680PS (500kW). That’s a 170PS (125kW) bump on the previous C63. There’s also an overall jump in torque too, up to 1,020Nm (752lb ft) from 700Nm (516lb ft). In other words, the new C63 has more torque than a Pagani Huayra or McLaren P1. That goes to the ground via the aforementioned two-speed electric motor and a nine-speed multi-clutch transmission. For the first time, this C63 is all-wheel-drive too because customers weren’t as in love with the tyre-smoking madman attitude of the old rear-drive cars as journalists were. Go figure. The result will no doubt be mega performance figures, with a claimed 3.4-second 0-62mph time that we think is bit conservative. Top speed is 155mph (limited), though that bumps to 174mph if you get the AMG driver’s package.

Unfortunately a small battery doesn’t necessarily mean less weight. The new C63 is a hefty beast, weighing in at over 2,100kg. The overall power-to-weight is a net improvement on the old car but that still makes it some 300-400kg heavier than key rivals. The battery and motors are partly to blame, adding just over 300kg, but so too are the added cooling apparatus. 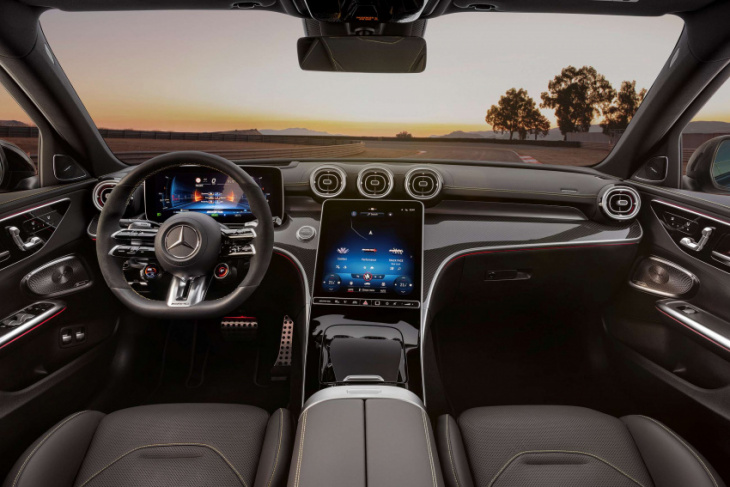 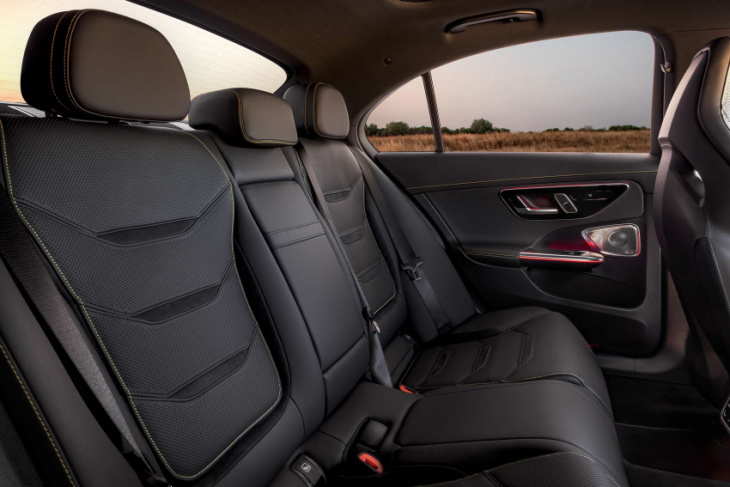 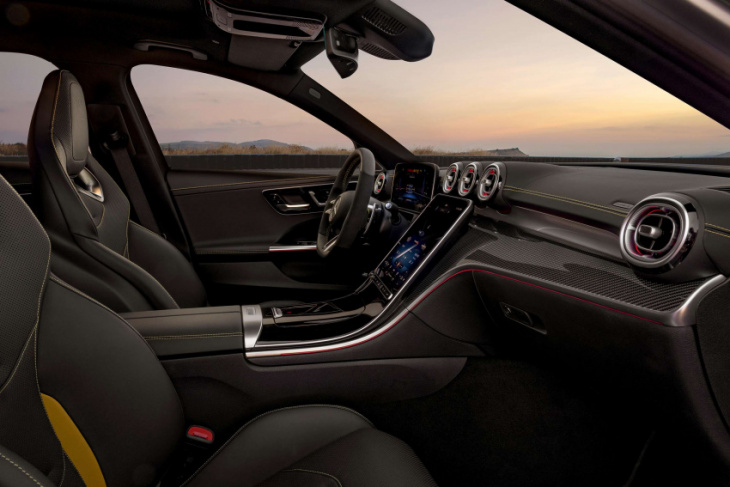 So big power and big weight. What has become a dynamically well-rounded car over the years will need some serious hardware to maintain its composure in this new generation. Agility is improved with a new all-wheel-steering system, getting that 50mm longer and 73mm wider nose into corners more tightly. Coil springs and constantly variable dampers suspend the car, with entirely new geometry up front and a revised setup at the rear taking the hybrid system into consideration. As standard the C63 gets steel brakes, though carbon ceramics will be available after launch.

The looks are perhaps the most appealing part (to us at least) about the new C63, being a continuation of the restrained yet muscular look of the previous car. Smooth surfacing and considered contours remain, though the more aggressive, wider front and ventilated bonnet do seem to somewhat teardrop into the rear arches which, unlike the BMW M3, aren’t wider compared to the standard car. Quad pipes and an aggressive yet carefully integrated diffuser complete the look, while optional carbon and black badges add some aggression. New for this car over its predecessor are the special AMG badge up front, and the red highlighted badging at the rear denoting an E Performance vehicle. 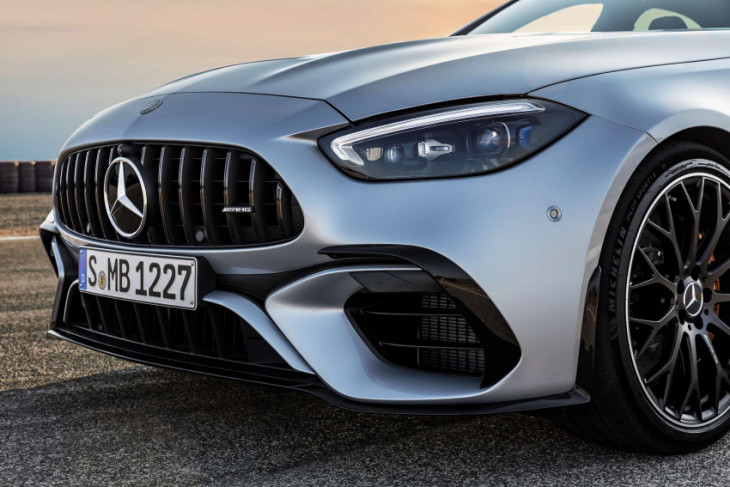 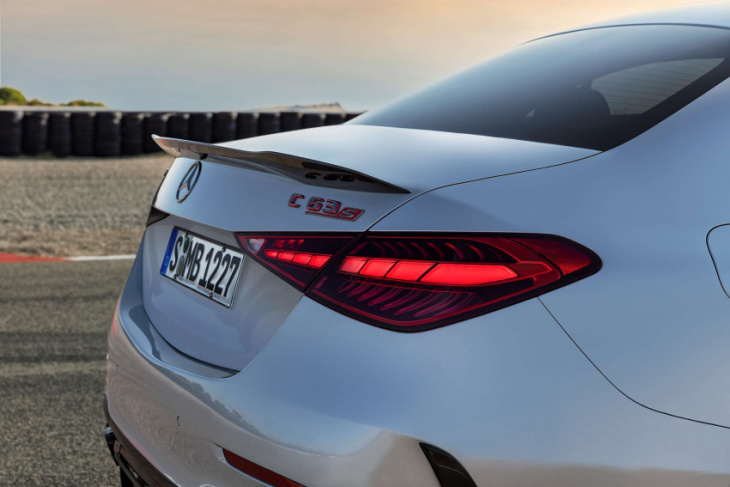 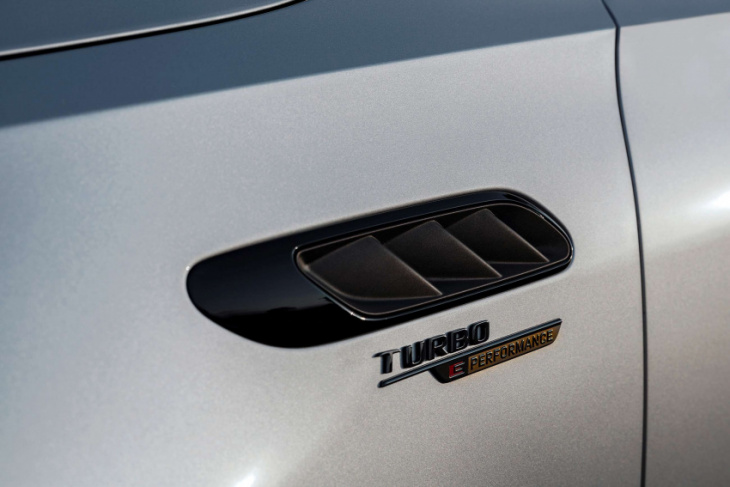 On the inside, it’s C-Class business as usual, with the AMG addenda you’d expect. Big bucket seats are complemented by the AMG-specific wheel with its drive mode selectors and suede trim. There’s AMG-specific graphics for the screens, especially in the more aggressive driving modes, while yellow stitching and carbon trim top it off.

The new C63 S E Performance will be available in saloon and estate variants from launch, when it goes on sale next year. So what do you think of the new C63? Will the super clever hybrid system and monster power make up for the diminished personality, which even Mercedes-AMG itself has admitted to? Or is the new BMW M3 with its authentic six-pot powerplant and added wagon option a bit more appealing? Let us know…