The new Jeep Compass e-Hybrid falls behind some talented rivals in the family SUV class, but it’s not without its charms

While Jeep hasn’t gone fully hybrid with the Compass e-Hybrid, it’s an interesting and tempting step in that direction. The Compass itself is now more of a contender in a hugely talented family SUV market with a bit of added Jeep cool, too, although this model does without four-wheel drive. Its biggest problem, though, is the strength of the more efficient fully-hybrid competition and the deals available on the likes of a Hyundai Tucson or Kia Sportage. It’ll be interesting to see if Jeep can react to make the Compass even more competitive.

As if all the different types of hybrids on offer weren’t confusing enough already, along comes Jeep with its latest form of electrification. Dubbed e-Hybrid, it’s available here in the revamped Compass as well as the smaller, older Renegade.

Sitting somewhere between a mild hybrid and a full hybrid, the e-Hybrid technology can power the car on electric power alone, but only at very slow speeds and for a few hundred yards if you’re lucky. So it’s more of a hybrid than a mild hybrid, but less of a hybrid than a full hybrid. And, of course, Jeep also offers its 4xe plug-in hybrids across its entire range; they’re apparently already accounting for a third of all sales.

Jeep has, so far, avoided the move onto parent company Stellantis’s platforms, developing its own technology for now – although we suspect that next year’s first fully-electric small Jeep will sit on the oh-so familiar CMA architecture.

However, much of what’s underneath the Compass is new, starting with the 1.5-litre turbocharged four-cylinder engine and seven-speed dual-clutch automatic gearbox. The engine has been chosen for its efficiency and suitability for hybridisation, with a belt starter generator installed – as in mild hybrids – to help smooth restarts. The gearbox has a 19bhp electric motor sitting within the transmission housing.

The 0.8kWh 48v battery sits within the central spine of the car, while this is a front-wheel drive-only Jeep – there’s no four-wheel drive option, so ideas of go-anywhere trips in an e-Hybrid will have to be shelved, or you’ll have to buy a different version. 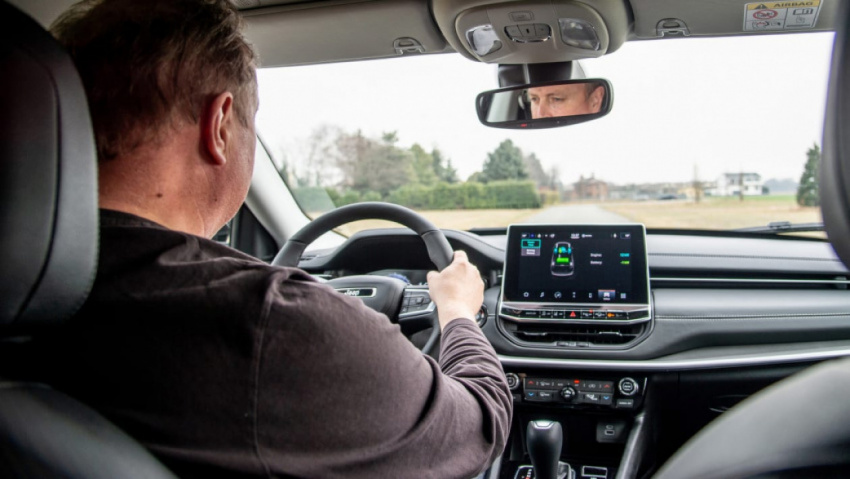 Prod the starter button and while the car springs to life, the engine doesn’t; Jeep calls that Silent Start. Then you move into e-Launch, which uses the electric motor to get the car going before the petrol engine quickly jumps in to help. At very slow speeds e-Creeping uses electric power where a traditional petrol auto will creep forward on tick over, but in stop/start jams e-Queueing again means you can keep going silently in heavy traffic.

Then there’s e-Parking, which uses electric power at parking speeds, plus e-Boosting to give a little extra power if needed when accelerating hard.

Jeep has steered clear of calling this a ‘self-charging hybrid’, preferring to say it’s ‘free from external recharge’. In fact, the brakes do a good and well-modulated job of sending power back to the battery – it’s called, you guessed it, e-Braking.

So how does it feel in action? If you’re gentle with the throttle, you’ll enjoy the gentle silence of initial acceleration and, yes, in traffic and when parking the electric power can take care of things. But unsurprisingly it’s not for long, and only a gentle flex of your right foot fires the petrol engine into life. It’s pretty unobtrusive, but there’s a slight shiver and jolt as the power modes switch – maybe a software update could smooth things even further.

Occasionally, the combination can get a bit flummoxed, for example if you’re slowing for a roundabout and suddenly ask for more power. It arrives quickly, but so does the jolt of confusion as the system thinks you’re going into electric-only power, only for the engine to be abruptly called into action. 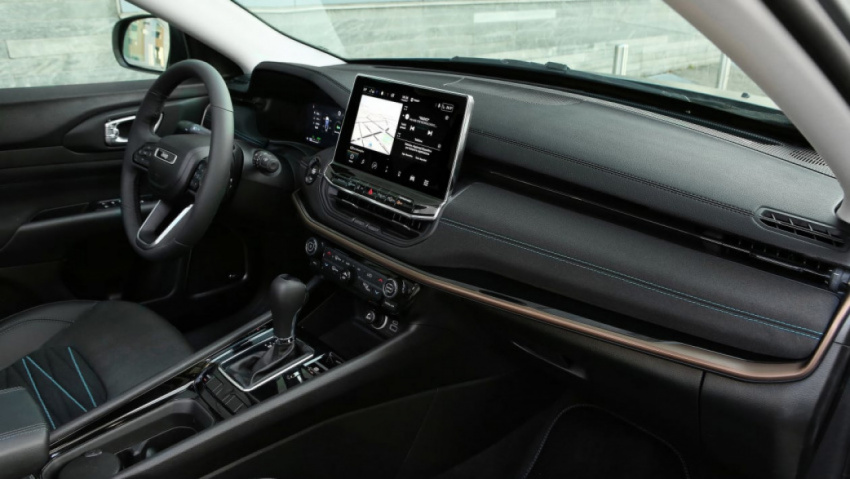 Once on the move, the dual-clutch gearbox is smooth enough, the engine is far from raucous and on the motorway things are impressively quiet. The ride isn’t quite as sophisticated, though. You feel pretty much everything, although the suspension does a reasonable job of smoothing out the worst of the bumps.

Nor is there much excitement from the performance, despite the electric boost – this Compass lacks a bit of verve when you really put your foot down. And despite the nice, thick-rimmed steering wheel, the car’s dynamics are pretty staid, too.

So does all that clever electrification keep costs down at the pumps or when it comes to VED or company car tax? Jeep says the e-Hybrid will use 15% less fuel than previous petrol versions and out-perform similar automatic diesel SUVs – a claimed average of 46.3mpg isn’t bad, while 139g/km of CO2 means company car tax at 32 per cent for the next tax year – both figures slightly behind fully hybrid rivals.

While plenty else has changed with the latest Compass to improve quality and tech, space hasn’t – but that’s no bad thing. Room in the back is good – although a third passenger will have to put their feet either side of the tunnel that houses the battery. Boot space is okay, too, at 438-litres, meaning the hybrid system hasn’t had any effect on practicality.

Our Compass e-Hybrid came in new eco-focused Upland trim, using recycled materials on the seats and dash – and the inside does feel smart and upmarket. You also get a 10.1-inch infotainment system with all the expected connectivity and remote functions via an app, a digital dash display and a raft of standard driver safety and assistance features that includes Highway Assist – an easy-to-use level 2 autonomous driving system combining adaptive cruise and lane-keeping assist.

It’s a premium price, though, at £35,895, which puts the Compass e-Hybrid up against some seriously talented full hybrids such as the Hyundai Tucson and Kia Sportage. If you can do without some of the niceties and recycled kit, the range starts at £32,895 for the excitingly named Night Eagle version.

Pics: A Jeep Compass 4x4 & a Trailhawk go on a short off-road excursion