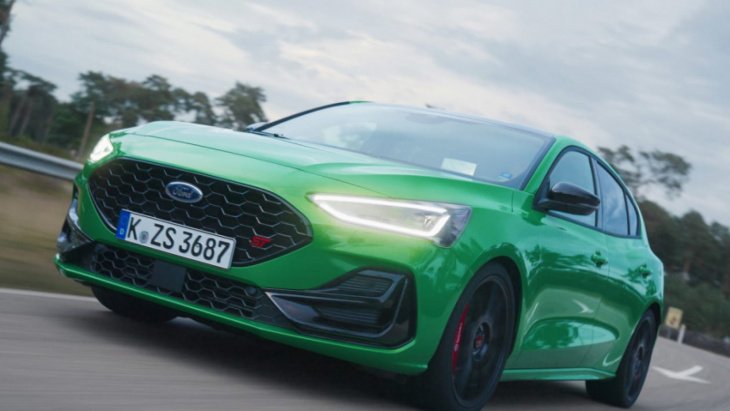 Ford has revealed a new Track Pack for its recently updated Focus ST, giving the midsize hot hatchback some high-spec hardware to rival the Hyundai i30 N and incoming Honda Civic Type R. It’ll be available exclusively on the five-door hatchback fitted with a six-speed manual transmission and costs an extra £3000, lifting the base price to £38,985.

Key changes in the new Track Pack focus on the chassis, with significant hardware upgrades around the brakes, suspension and wheels that will improve capability while marginally reducing weight.

This starts with the suspension upgrade, which swaps out the standard car’s adaptive dampers for a set of manually adjustable coilovers sourced from KW. The dampers are adjustable 12-ways for compression, 16-ways for rebound and come paired to new powder-coated coil springs that are 50 per cent stiffer than standard. The ride height is also manually adjustable, and comes setup 10mm lower than a base ST from the factory, with a further 15mm drop able to be dialled in. 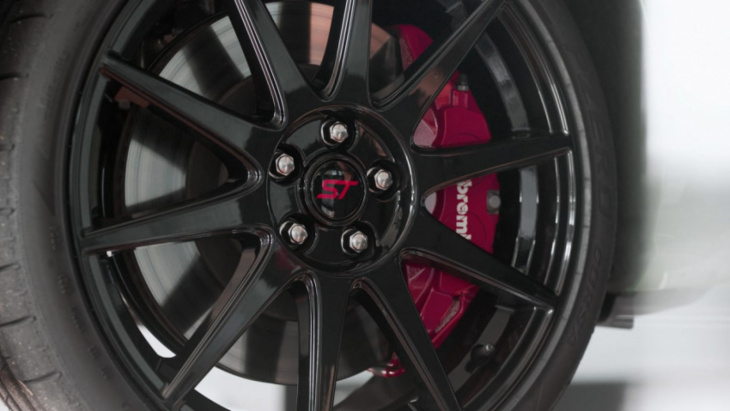 The new suspension works in conjunction with a set of 19-inch flow-formed alloy wheels that you might recognise from the short-lived ST Edition of the pre-facelift model. These are 10 per cent lighter, reducing unsprung weight and are wrapped in a set of sticky Pirelli P Zero Corsas.

Behind the new wheels are a set of Brembo brakes on the front axle that increase the standard ST’s front discs by 33mm to 363mm, gripped by larger four-piston calipers. All of this new hardware should make the ST Track Pack more resilient on track days, as well as sharpen the already impressive handling balance.

The new Track Pack doesn’t include any upgrades to the engine or drivetrain, but then the standard ST’s 276bhp turbocharged 2.3-litre four-cylinder engine is already a potent power unit. The engine’s power figure might seem average for the class against the 282bhp Hyundai i30 N or 296bhp Golf GTI Clubsport, but in being derived from larger American-market models like the Mustang and Bronco (not to mention the previous Focus RS), its peak torque figure of 310lb ft between 3000-4000rpm is superior to all key rivals. 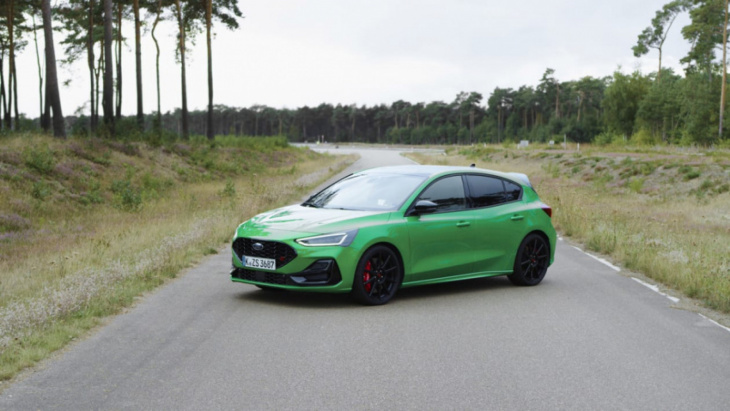 The six-speed manual transmission with flat-shift and auto blipping functions is the sole transmission available with the track pack – standard STs also come with the option of an eight-speed automatic – and is unchanged alongside the existing electronically controlled limited slip differential. Performance figures are unchanged to the standard car, hitting 62mph in 5.7sec and topping out at a capped 155mph.

Ford’s also thrown in a few aesthetic updates alongside the hardware changes made up from gloss black finishes to the roof, mirror caps and other detailing around the bumpers, plus new black outlines to the ST badging. This all comes alongside the standard ST’s recent updates that have freshened up the overall design and brought in new bucket seats and a new touchscreen interface.

The new Focus ST Track Pack is available to order now, with first units arriving to customers in November this year. There’s no doubt the ST has a mountain to climb in order to usurp its rivals, but with new hardware on board this new Track Pack has the best chance yet.