Ford’s rival to the Volkswagen ID. Buzz gets eight seats and a 230-mile range 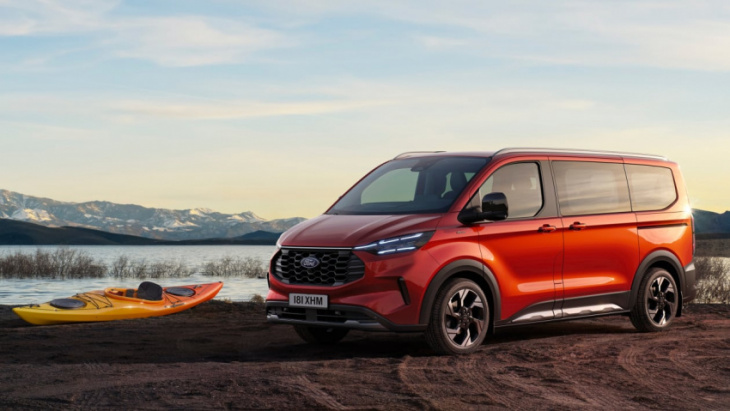 Ford has announced an all-electric Ford e-Tourneo Custom MPV with room for eight occupants and a 230-mile range. It’s the first time the Tourneo – which will also be offered in plug-in hybrid and diesel forms – will get a battery electric option, putting it head-to-head with the Volkswagen ID. Buzz.

As the car giant prepares to retire the Ford Galaxy and S-MAX MPVs in 2023, the e-Tourneo Custom will also gain upmarket features to help it appeal to families who need more space than the Ford Kuga or Mustang Mach-E SUVs can offer. A panoramic sunroof, B&O stereo and hands-free power sliding side doors will all be available, alongside a digital key card that utilises NFC technology.

Six lightweight rear seats will be highly flexible, thanks to a floor rail system that allows them to be repositioned or removed altogether for van-like space – the e-Tourneo is based on the e-Transit after all. The middle row can face in either direction to provide conventional seating or a ‘conference layout’ and there are five ISOFIX child-seat mounting points in total – three across the middle row and two positioned in the outer seats of the third row. 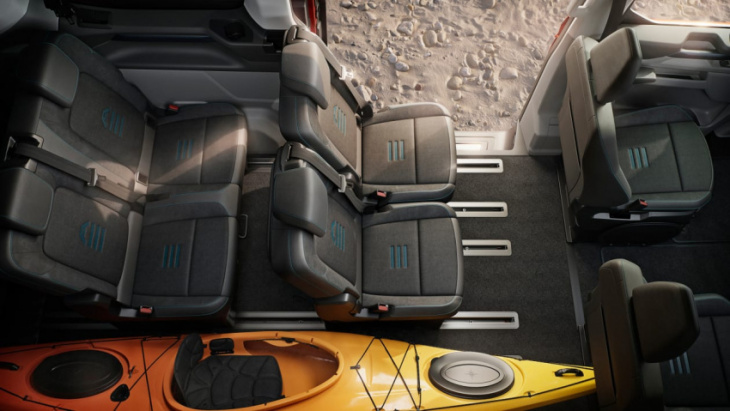 Other practicality benefits include power sockets in the front of the cabin that can output up to 2.3kW from the battery pack. This is enough to power off-grid camping, sports equipment and tools, according to Ford. The e-Tourneo Custom can also tow a large caravan or trailer weighing up to 2,000kg.

Its 74kWh battery not only gives the electric MPV its impressive 230-mile range, but it can also be topped up at speeds of up to 23 miles per five minutes using 125kW DC fast charging. A top-up from 15-80% takes as little as 41 minutes, and an 11kW AC charger is fitted for charging at home or work. Power is provided by a 215bhp front-mounted electric motor and Ford has already stated that ‘one-pedal’ driving will be available.

The dashboard features a 13-inch touchscreen using Ford’s SYNC 4 infotainment software; this comes as standard with Apple CarPlay and Android Auto and sits alongside a steering wheel that can be used as a laptop holder, or flip up to form a makeshift table. Trim levels include an outdoorsy Active version, along with a Sport series and a range-topping Titanium X. Along with some of the headline features mentioned above, the Titanium X will also get 19-inch alloy wheels, full Matrix LED headlights and Sensico synthetic leather upholstery.

If you don’t fancy an electric eight-seat MPV, diesel and plug-in hybrid (PHEV) versions will also be available, with up to nine seats. Ford’s EcoBlue diesel will offer 134bhp, 148bhp or 168bhp and either a six-speed manual or eight-speed automatic transmission, along with the option of four-wheel drive. Ford’s PHEV powertrain gets a 2.5-litre petrol engine, electric motor and 11.8kWh battery for an EV driving range of up to 31 miles.

While no pricing has yet been confirmed for the all-electric Transit e-Tourneo Custom, we’d expect it to cost from just over £50,000, given the pricing of the outgoing Tourneo model.