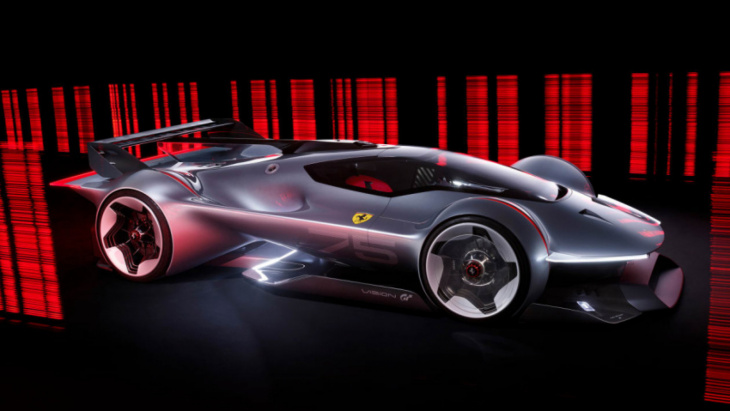 2022 marks the 75th anniversary of Ferrari’s first-ever racing car, the 125 S, and to celebrate the Italian firm has created a virtual concept racer, called the Ferrari Vision Gran Turismo.

As you may guess from the name, the Ferrari concept is restricted to the Gran Turismo racing game, following in the footsteps of the Mercedes-Benz AMG Vision GT, BMW Vision GT, Toyota FT-1 Vision GT, Mini Clubman Vision GT and plenty more. The concept also ties in with another anniversary as it’s 25 years since the first Gran Turismo game launched.

Although the Vision Gran Turismo is just a virtual car, Ferrari says “it represents a futuristic design manifesto for Ferrari’s road and racing cars”, so we may yet see some of its wild elements incorporated into real cars.

The overall design is inspired by Ferrari’s new 499P – a race car that will enter next year’s Le Mans Hypercar class. Ferrari claims the sleek body is extremely aerodynamic thanks to a rear diffuser and wing developed from the 499P. The Vision Gran Turismo is also a single-seater with a central driving position.

The powertrain is adopted from the 296 GTB hybrid supercar and features the same twin-turbocharged 3.0-litre V6 but with three electric motors (one on the rear axle and two on the front) to deliver 1,016bhp and 1,100Nm of torque. The result is a 0-62mph time of under two seconds, a 0-124mph time of under five seconds and a top speed over 217mph. Power is sent through a dual-clutch, eight-speed gearbox to all four wheels.

The Vision Gran Turismo was launched at the GT World Series Nations Cup Final in Monaco. On 15 December a full-scale model will make its first public appearance at the Ferrari Museum in Maranello.

Now check out all the details on the new Ferrari Purosangue…