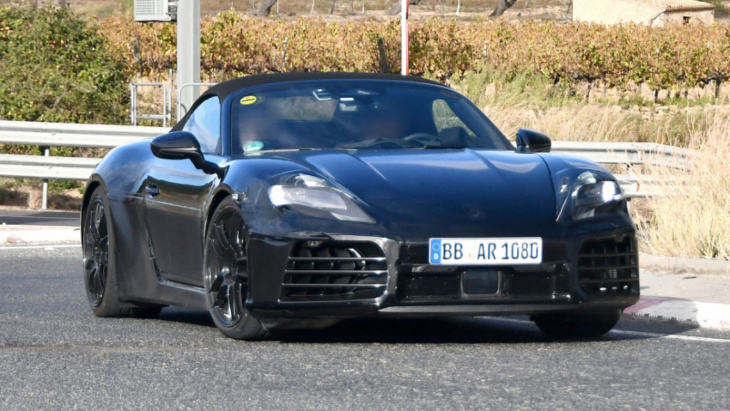 The all-electric Porsche 718 Boxster has been spotted testing on the public road for the first time. Porsche has previously confirmed EV power would also come to the Cayman, with a planned launch date of 2025 for the pair.

The current 982-generation of the Boxster and Cayman was launched in 2016 and will be the last iteration of Porsche’s two-seat sports car with an internal combustion engine. The all-electric 718 will be the brand’s third pure EV, following from the Taycan and the upcoming Macan EV which is set to launch in 2023.

We’ve already been given plenty of technical details through the Mission R concept as the production car will use the same bespoke platform developed for that car. Styling will also be influenced by the Mission R, with these latest spy pictures showing slimmer, more horizontal headlights and a tall rear bumper feeding into a new full-width LED lighting bar.

Speaking at Porsche’s business update earlier this year, CEO Oliver Blume, said “Mission R will be an inspiration for the series of our 718 mid-engined sports car. In the middle of the decade, we want to electrify this series. We want to make the 718 series exclusively electric.” 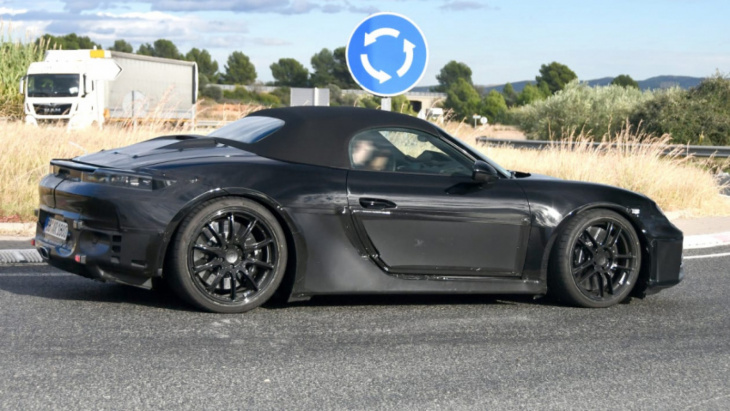 Both the Mission R and the subsequent Cayman GT4 ePerformance feature an 82kWh battery pack supported by a dual electric motor setup developing 1,073bhp. This setup enables 0-62mph in just 2.5 seconds, and a top speed of 180mph.

It’s far too early to speculate on the specification being readied for the next-generation car’s launch, but looking at the spy shots does at least point to the changes necessary to equip a car of the Boxster’s segment with a battery providing a usable and competitive range in the real world.

The spy shots hint at a much elongated wheelbase, with surprisingly long overhangs front and rear. These overhangs could be red herrings created by extra cladding, designed to obscure the true proportions of the production vehicle. The exhaust tip protruding from the rear bumper almost certainly is. However, the additional bodywork running from behind the door to the rear axle reveals the longer wheelbase necessary to fit a battery pack similar in size and layout to the Mission R’s 82kWh unit. 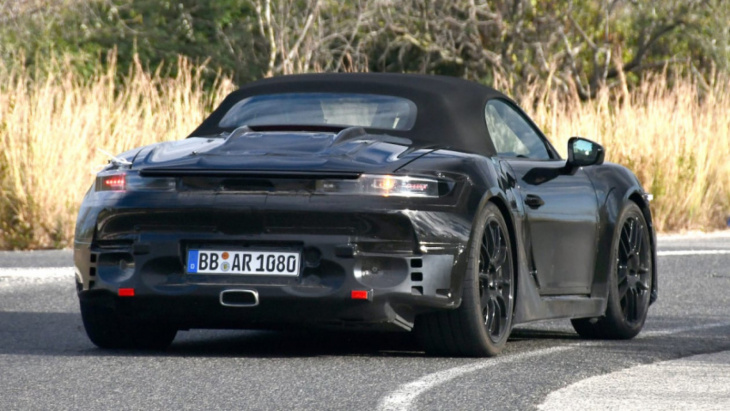 Unlike many contemporary EVs – which utilise an underfloor battery – the Mission R has been developed with a battery stack behind the passenger cell, creating a similar layout and weight distribution to a mid-engined sports car using an internal combustion engine. This also means that the seating position remains low-slung, as is traditional in the class.

Lotus has confirmed it is developing a similar concept for its future electric sports cars, and the extra length between the doors and rear axle, along with the extra volume of body work beyond the car’s B-pillar, are tell-tale signs that this idea has been carried through from the Mission R to the production Boxster model.

Just as it’s done with the GT4 and GT4 RS versions of the current car, Porsche could look to offer a high-performance, track-honed version of the new Cayman with a similar power output and dual-motor setup to the Mission R, but single-motor variants driving the rear axle only, and providing fast road car levels of performance with decent usable range will be the priority for engineers.

Now read our list of the best sports cars…

Keyword: New electric Porsche Boxster spotted out of the road