Chrysler is teasing a limited model with "C" in the name. Not many things that could be. 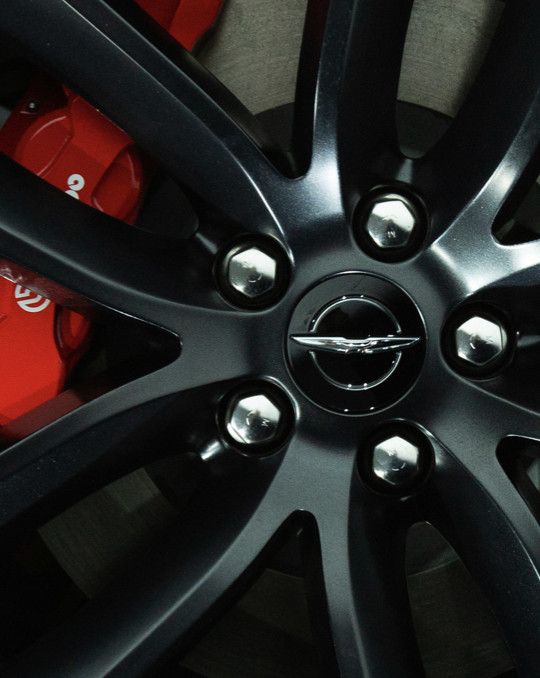 Dodge may have spent the past decade building increasingly faster and wider variants of its flagship Charger, but Chrysler’s equivalent 300 has not been so lucky. The Charger has been both Hellcatted and over-Hellcatted, while the full-sized Chrysler sedan has actually gotten slower since its second generation debuted in 2011, dropping both the 300C and its segment-topping SRT-8 variant. With the end of gasoline-powered performance rapidly approaching at Stellantis, that may finally change.

The wheel and Brembo brake in the teaser could theoretically be attached to just about anything, sure. But, the caption on Monday’s Chrysler teaser seems to indicate that this is, specifically, an iteration of the 300C. The teaser adds that “limited quantities” will be available in Spring 2023, implying that this is some sort of ultimate send-off for the 300.

What form could it take? The previous 300C SRT-8 boasted 470 horsepower from a 6.4-liter V-8, but the standard for Stellantis performance has increased exponentially in the eight years since that car went out of production. The current equivalent Charger, the SRT 392, boasts 485 horsepower and seems like the most logical landing point to send off the 300C badge as we know it. However, Stellantis has been putting its Hellcat V-8 in increasingly strange situations for the past few years. A more ambitious final 300 could boast that engine, a 6.2-liter supercharged V-8 that starts at 707 hp and is currently available in a Charger SRT Hellcat Redeye producing 797 hp.

With all of the excitement and hype that’s surrounded the Dodge Challenger and Dodge Charger over the last several years, one might forget how big of a deal those cars’ LX platform-mate, the Chrysler 300C, once was. The Scat Packs, Hellcats and Demons might be the cars that get all ...


View more: 4 Advantages the 2023 Volkswagen Arteon Has Over the Chrysler 300

Should Chrysler have done more to send this out with a bang? To wrap up the final production year of the current Chrysler 300 and celebrate the nameplate’s 70-year history, Chrysler will release the 2023 Chrysler 300C, marking a return of Hemi power to the lineup. Some people and especially ...


View more: Chrysler says goodbye to the 300C... with a Hemi, of course

3 Reasons to Buy a 2022 Honda Odyssey, Not a Chrysler Pacifica