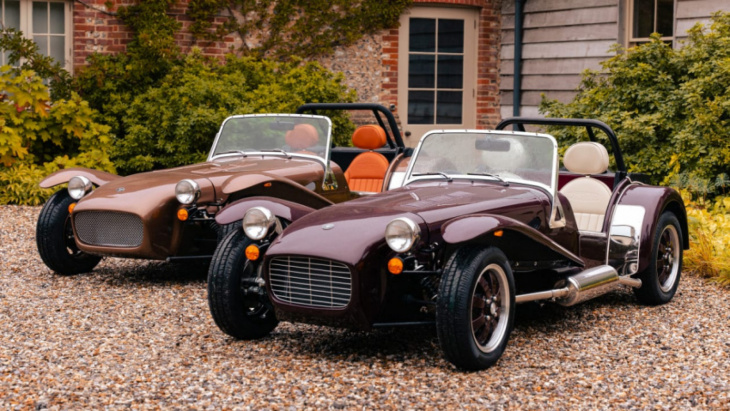 Caterham cars haven’t really changed much during the firm’s near-half century in existence, which you could say is a key reason for Caterham’s longevity and success. Now, taking inspiration from its early Super Sevens of the 1970s are two new models following the familiar formula – the Super Seven 600 and the Super Seven 2000.

There’s not much to mark the two models out in terms of looks. The classic Caterham Seven proportions remain, with a long, thin bonnet, seats positioned almost on top of the rear axle and stubby rear end.

Key exterior changes include flared front wings that Caterham has previously used on the Super Seven 1600, Sprint and Super Sprint, plus 14-inch ‘Juno’ wheels on the 600 and 14-inch ‘Classic’ wheels on the 2000. There’s also a chromed filler cap, a Moto-Lita leather steering wheel, a carpeted rear backrest panel and LED rear lights. 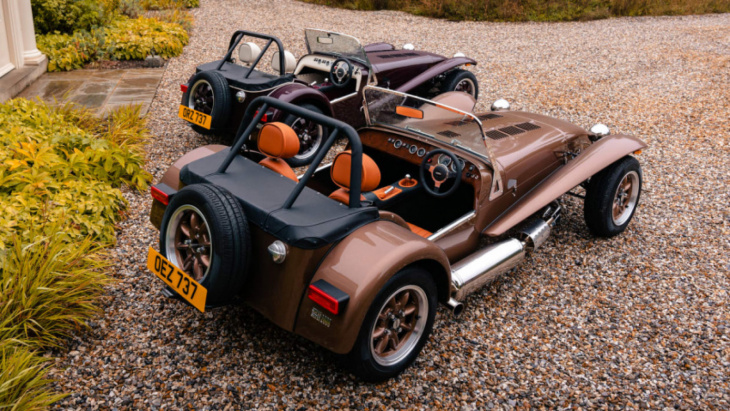 The Seven being such a focused, lightweight sports car, it’s not surprising that Caterham keeps the options list short. There’s a range of paint finishes (including some new ones exclusive to these two new models) as well as interior colour options for the carpet, dashboard, leather seats, gear knob and handbrake gaiters.

Kicking things off in terms of pricing is the Super Seven 600 at £29,990. It’s powered by a turbocharged 660cc Suzuki engine, producing 84bhp. Given the 600’s lack of weight (Caterham has not given weight figures, but expect around half a ton), 0-60mph stands at 6.9 seconds – the same as the existing Seven 170 version.

The more powerful Super Seven 2000 gets a Ford Duratec-derived engine (the same as the one found in the 360S, with 180bhp delivered from the 2.0-litre four-cylinder unit. This gives the 2000 a 0-60mph time of 4.8 seconds. Caterham will also add a sport suspension package for the 2000 – featuring a rear anti-roll bar and front ventilated discs with quad piston callipers. The 2000 starts from £39,990.

Both cars can be specified with a limited-slip differential and in true Caterham fashion, both can be delivered as kits to UK customers for self-assembly.

From the archives: Caterham Roadsport 175 vs Superlight R300

Is this coachbuilt Caterham the ultimate reborn classic?

Caterham Seven Sprint goes back to the 1960s

Lightweight Caterham Seven 170 goes on sale in the UK

Caterham’s latest concoction is more exciting, invigorating and intense than ever, long live the mighty Seven

One of Caterham’s most extreme road-legal cars ever is, unsurprisingly, one of its most thrilling.

A new model of Caterham Seven? Doesn’t really look like it? Because it’s all about maximum fun with minimum weight? But I can build a Seven myself if I want from a kit, right? So what makes it a ‘track spec’ Caterham? Sounds a bit more fun than flappy ...

British sports car manufacturer, Caterham, has just announced its lightest-weight production Seven ever, called the Seven 170. It also arrives as the smallest Seven yet as well, measuring just 1470mm wide. The Caterham Seven has been around for decades. You’ll immediate spot the iconic body, with its semi-open-wheel design and ...

Caterham Brings Back the Super Seven

The Super Seven 1600 is designed to reflect the joy and glamour of motoring in the 1970s – minus the drawbacks.

Even Caterham Broke Sales Records In 2021

Would you buy a Caterham SUV? You might get the chance on day

Caterham Superlight Twenty Revealed: A Homage To The 1996 Original

The Newest Caterham Sevens Are Perfect

The new Caterham Seven 420 Cup is a supercar killer