Running on a diet of petrol and electricity, these large SUVs all put efficiencyfirst. Time to see which offers the best all-round recipe... 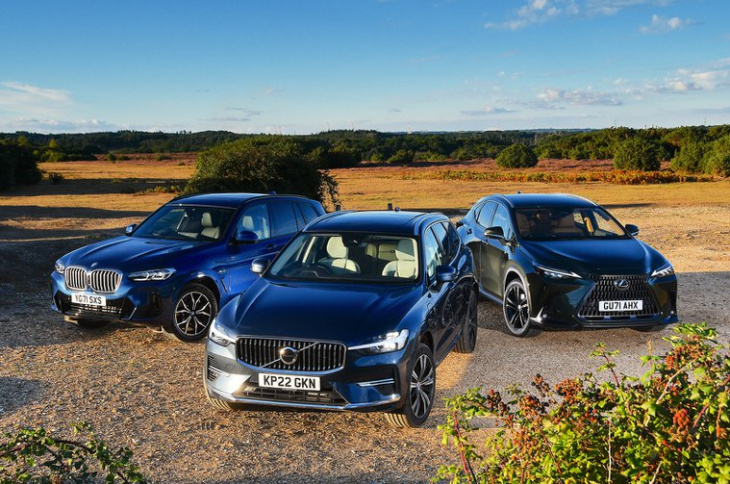 Facelifted X3 gets a more aggressive-looking exterior and a heavily revamped interior, but its hybrid tech and electric range remain unchanged

The XC60 has always been a strong contender in the large SUV class, and now a mid-life refresh has given the plug-in hybrid variant a significantly improved electric range

Here’s your starter for 10: what does a plug-in hybrid (PHEV) have in common with the humble octopus? Answer: multiple hearts. You see, rather than having a single heart to perform all of its circulatory system’s duties, the octopus evolved with three hearts to take on individual assignments, enabling it to not just survive, but thrive, in various environments. 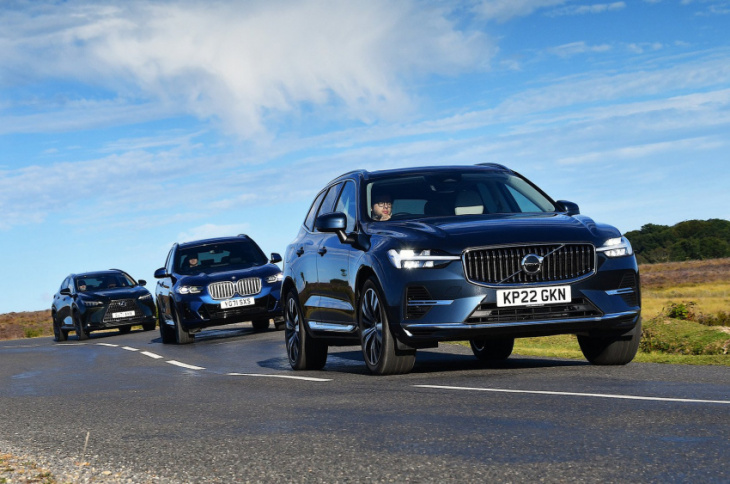 And it’s much the same story with PHEVs. By having both a petrol-powered heart and an electric one, these machines are the masters of different environments. They’re capable of zero-emissions running around town, but their internal combustion engines mean longer journeys don’t have to be planned around stops for charging up.

And some PHEVs are evolving particularly quickly. Take the Volvo XC60 Recharge T6. When it was launched in 2020, its official electric range was 33 miles. Since then it’s risen to 48 miles – not only cutting petrol bills for private owners, but also dropping the model into the appealingly low 8% company car tax bracket.

The BMW X3 xDrive30e has undergone a more superficial metamorphosis. Walk around the latest version and you might notice its more pronounced nostrils and restyled front and rear LED lights, and that its dashboard looks more high-tech than the 2021 car’s, but it’s a little disappointing that the official electric range remains unchanged, at 30 miles. 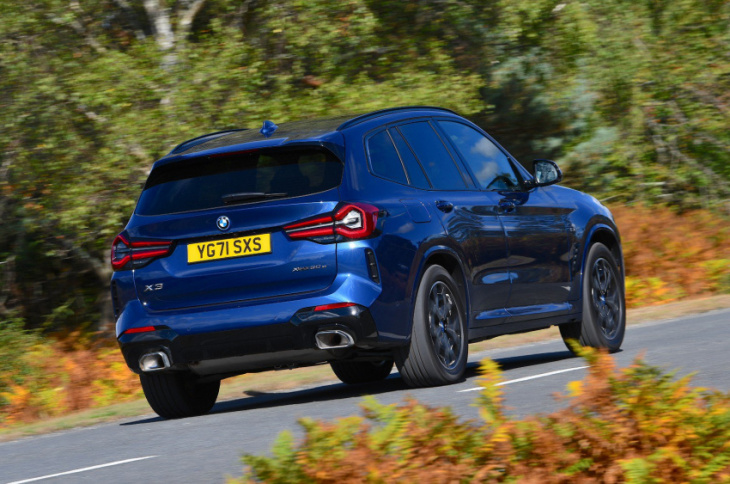 We’re testing both cars against the Lexus NX 450h+, which comes into this contest as the dominant species. It was named Plug-in Hybrid of the Year at our 2022 Car of the Year Awards, thanks to its impressive efficiency, competitive list price and great interior.

Of the three cars, the NX treads the middle ground in terms of electric range, officially managing 43 miles. But does it still have the upper hand, or has evolution already overtaken it? Let’s find out.

As we’ve already hinted at, low tax rates mean choosing a PHEV makes a lot of sense for company car users. Private buyers, though, stand to benefit much more from such cars’ potential fuel efficiency, and for the biggest financial gains, you’ll want to drive on electric power as often as possible. And that’s where the NX and XC60, with their relatively large batteries (18.1kWh and 18.8kWh respectively), have a considerable advantage over the X3 and its weedier 12kWh unit. 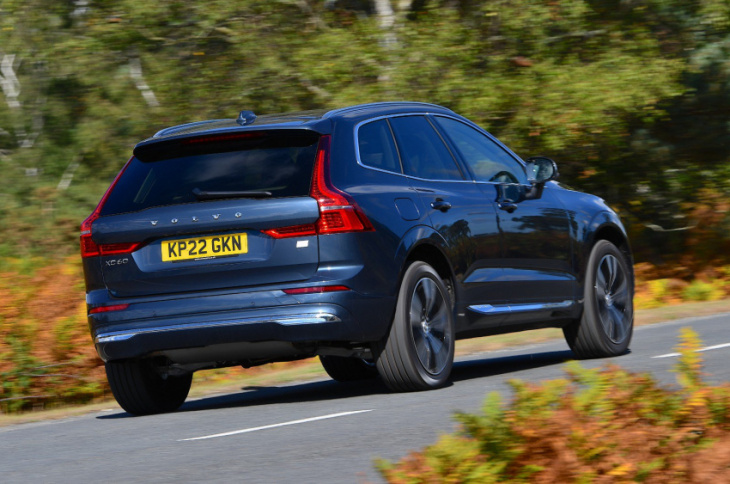 On our private test track, simulating a mix of motorway, country road and town driving, the NX covered 33 miles before calling on its petrol engine to help out, with the XC60’s engine springing into life just a couple of miles later at 35 miles. The X3, by contrast, managed only 24 miles before its petrol engine kicked in. That kind of range might have been acceptable in 2015, but it’s well off the pace in 2022.

Better news, though, is that you don’t have to drive any of our contenders with a particularly gentle right foot in order to avoid invoking petrol power. Our range test route (on the same test track) includes such challenges as steep inclines and simulated motorway slip roads, and at no point did any of our trio feel underpowered when running on electricity. In fact, so plentiful is the performance that their petrol engines are only called into action when you mash the accelerator into the carpet.

Do this and you’ll probably be surprised at the result; these SUVs might look like docile creatures, but with their two hearts working in unison, they’re mighty quick. Even in damp conditions, the XC60 managed to clock a 0-60mph time of just 5.4sec, making it the quickest of our trio. Now, to put this time into context, the Volkswagen Golf GTI hot hatch takes more than half a second longer to reach 60mph. 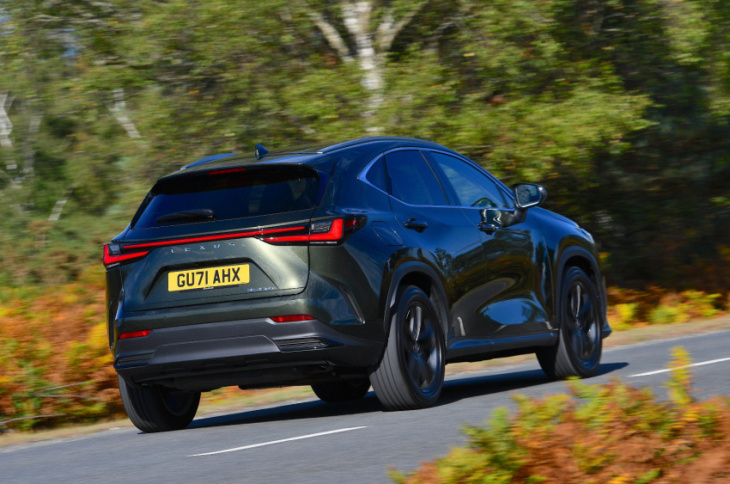 The X3 and NX aren’t too far behind, managing 0-60mph in 6.3sec and 6.5sec respectively, although it’s worth pointing out that in most real-world situations the latter car is actually the quicker of the two. That’s because, while the X3’s greater traction means it gets off the mark more promptly, the NX delivers stronger acceleration above 30mph and isn’t too far behind the XC60 once the front tyres find purchase.

Back off the accelerator and, assuming the batteries are depleted, you can hear the NX’s and XC60’s engines humming away at a cruise. The NX’s also sends some minor vibrations through its steering wheel and pedals, while the XC60, on its optional 20in wheels, kicks up a bit of road noise from the tyres. The X3 doesn’t suffer from any of these afflictions (although you do hear the odd thump from its rear suspension over particularly nasty bumps), and it recorded slightly lower decibel readings at both 30mph and 70mph in our tests.

The tables are turned when it comes to ride quality, though. Despite having a firm edge to its ride at lower speeds, the NX is the most comfortable car at a cruise, feeling settled and controlled. Higher-spec F sport models get fancy adaptive suspension, but we don’t think you need it, because the standard car is already comfier than most rivals, thanks in part to its relatively small 18in wheels. 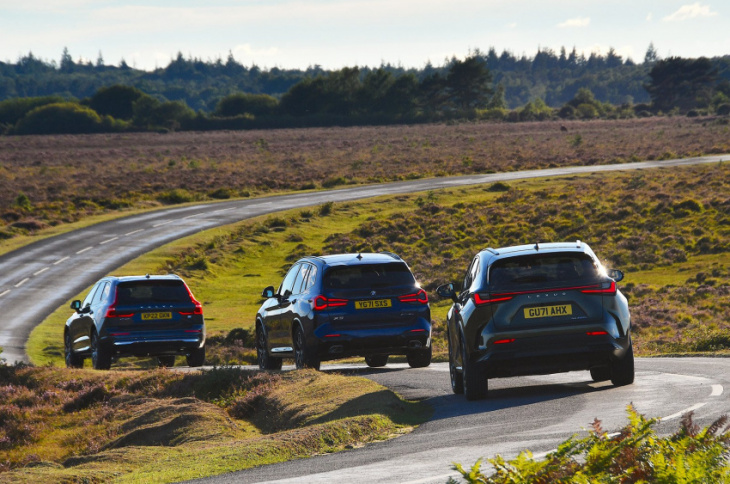 Not that the XC60 is far behind; even on the optional 20in wheels fitted to our test car, it does a surprisingly good job of taking the sting out of potholes around town. Only at motorway speeds will you notice its ride is a little busier than the NX’s, and it’s still leagues ahead of the X3, which never feels particularly settled and has a tendency to thump and hop over larger road surface imperfections.

The pay-off for the X3’s firm ride is that it feels fractionally more agile than the NX and XC60; it turns in more eagerly, generates less body sway when you change direction and has sharper steering. However, none of these cars feels particularly sporty to drive.

Seven-seat RX-L replacement on the horizon

Lexus RZ450e 2023: May release date in Australia for electric SUV

The Lexus RX is nearing the end of its current lifecycle, but there’s still lots to like about the Japanese brand’s fourth-generation family SUV

3 Most Common Lexus IS Problems Reported by Hundreds of Owners

Inside rearview mirror discoloration Clicking noise from the rear suspension Check Engine light with three codes Are Lexus IS reliable cars? The Lexus IS name has undergone significant changes since its initial release. First released in 1999, the Lexus IS was sold in the United States as one model, ...


View more: 3 Most Common Lexus IS Problems Reported by Hundreds of Owners

Bollywood and flashy cars are a match made in heaven and almost each and every celeb in the B-town currently drives around in one or the other luxury car. Recently the “Desi Boyz” fame actress Chitrangada Singh picked up a BMW X5 luxury SUV. Previously the actress used to commute ...

Volvo Cars has hired a new head of design with Jeremy Offer joining Volvo from British electric vehicle developer Arrival and will take over as Global Head of Design from 1 May 2023, succeeding Robin Page. According to a statement by Volvo Cars, Jeremy Offer brings with him 35 ...

India raises tax on imported cars, motorbikes, including EVs in a bid to boost "Make in India" scheme