The X1 is still some way from an involving driver’s BMW and this petrol powertrain isn’t without flaws, but the third-generation X1 does feel like another strong evolution towards being a more rounded, premium small SUV that’s still big enough to act as an everyday family car. We suspect the plug-in hybrids, with their excellent BiK rates, will prove very tempting options for company car choosers, too.

You certainly can’t accuse BMW of being short on persistence. Its original entry-level X1 was an ugly child when it made its debut, as neither a proper SUV nor a style-focused crossover, back in 2009. Many of the sharper corners were knocked off by the second generation, in 2015. And now the third generation is being offered with such a variety of powertrains that BMW must be hoping there’s one for every taste.

It’s a little bigger again too, this X1 – in length and wheelbase – but it sits on the same UKL2 platform as the old car (and the likes of the 1 Series and 2 Series Active Tourer). This time, though, BMW is making use of the architecture’s adaptability and slotting a pure-electric variant, the iX1, into the line-up, alongside a full range of combustion-engined models.

The entry point in the UK is the rear-wheel-drive sDrive18d, featuring a 2.0-litre, four-cylinder diesel motor producing 148bhp and 360Nm of torque. It’s claimed to deliver up to 58mpg and costs from £36,225 – a potentially useful £2,000-odd less than Mercedes’ cheapest GLA diesel.

All of the other UK X1s are four-wheel drive, starting with the four-cylinder petrol xDrive23i (215bhp and 360Nm, with prices from £42,080) and the more potent diesel, the xDrive23d (208bhp and 400Nm, from £43,235). These options both get 48-volt mild-hybrid technology, with a 19bhp gearbox-integrated electric motor that can help with the stop/start functionality and allows engine-off coasting.

For those buyers who want to go further along the electrification path, but stop short of the iX1, there are also a couple of petrol-based plug-in hybrids: the xDrive25e, with 242bhp and 477Nm, and the xDrive30e, which has the same amount of torque, but 322bhp. Both of these cars have official pure-electric ranges of between 48 and 55 miles, which is enough to drop them into the eight-per cent Benefit-in-Kind rate for company car tax.

Here, though, we’re driving the xDrive23i edition, which is likely to be among the more popular choices for private buyers. It’s a model that doesn’t really have an obvious rival within Merc’s PHEV-heavy GLA range. Even Audi’s more powerful petrol Q3, the 40 TFSI Quattro, doesn’t get anywhere near the sort of output produced by BMW’s four-cylinder turbocharged engine.

Sure enough, the engine’s prodigious shove can make this X1 feel brisk. But how it delivers that performance is rather less satisfying. The motor produces its best work within a relatively narrow power band – and although the seven-speed automatic transmission generally does a decent job of keeping it in that comfort zone, when you do put in a request for additional performance, the set-up can be found wanting – not in ultimate delivery, but in the manner of it. The dual-clutch gearbox just isn’t as smooth-shifting or as intelligent as BMW’s eight-speed automatics, and the engine has a fairly unappealing drone that can become a little thrashy at higher revs.

The management of the electric boost also doesn’t feel particularly well calibrated, so the system can feel like it’s constantly chasing its own tail. A sophisticated BMW long-distance cruiser it is not.

If anything, it’s easier to drive smoothly by putting the car in efficiency mode and committing yourself to the physical reality of softened throttle response. You’ll get a slightly more relaxed experience overall, even if economy doesn’t jump massively.

The chassis isn’t about to challenge BMW’s iconic rear-wheel-drive models for involvement, but the X1’s dynamics still feel like a standout offering in the class. There’s balance, poise and composure here at levels that the Audi Q3 could only dream of – and acceptable comfort.

However, it’s worth noting that all of the test models on offer at BMW’s launch event were fitted with M suspension with frequency-selective damping as well as a 15mm lower ride height.

While the steering is – sadly – numb, the response is crisp and there’s a pleasing amount of heft as you load the system up. BMW’s engineers have done a good job of dialling out transference of road imperfections, too. The overall experience remains rather anodyne – a digital car for a digital age, perhaps – but at least it also helps to deliver solid motorway refinement.

The engine and gearbox are much happier with life once you’re up to speed, so they fade away, and you’re well isolated from tyre roar beneath you. Only noticeable wind rush from around the side mirrors spoils the party, though it’ll be less of an issue at British motorway speeds than it was on the autobahns in Germany. 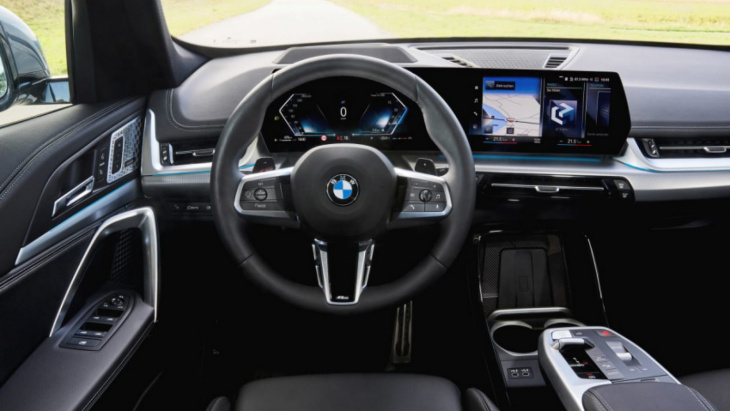 These dynamic traits are all evolutions of what’s gone before, in truth – as you might expect, given the continuity in the X1’s underpinnings. The real revolution comes in the cabin, where there’s an all-new fascia, improved materials, greater tech and even a little more space.

Ahead of the driver are a pair of screens, similar in their curved layout to those of the recently updated 3 Series and the flagship iX SUV, but smaller to reflect the X1’s more compact dimensions. Even so, the 10.25-inch digital instrument panel and the 10.7-inch infotainment screen feel bang up to date – helped by the latest BMW Operating System 8 software. The smaller cabin has persuaded BMW that you can easily reach the touchscreen, removing the need for the rotary iDrive controller; we’re less sure, but at least the screen’s responses are snappy.

The materials all feel solid enough, and there’s a satisfying mix of brushed-chrome surfaces and double stitching to help break up the padded plastics. As before, the overall impression is of a crossover rather than a full-blown SUV, so while the seating position is elevated, it’s only by a few centimetres overall.

The storage up front is a little odd – there’s a bizarre shallow tray in the armrest and then a large free area beneath it. But the smartphone wireless charging pad at the base of the dashboard, with a clip to secure the handset, is an interesting and potentially useful feature.

The latest growth spurt hasn’t gone to waste in the rear of the X1’s cabin, either. True, there’s a bit of a transmission tunnel hump that could annoy anyone sitting in the middle seat, but even with the panoramic roof, there’s decent headroom for six-footers, to accompany generous amounts of leg and kneeroom. The rear seats can slide fore and aft (except on PHEV models or the iX1), allowing you to prioritise cabin space or boot capacity.

The load bay itself is a decent shape, with multiple bag hooks on both sides, and there’s a variable-height floor so you can adjust for a flat load lip or maximum capacity. The rear seats fold in a 40:20:40 split, too, and if you drop them all, the boot size grows from 540 to 1,600 litres.