New Apple CarPlay: It’s Still Not Clear if Manufacturers Will Bend to Make It Happen

In-car technology has progressed dramatically in the past few decades, introducing innovative features like Apple CarPlay. With this feature, you can use your iPhone to access apps through your car’s infotainment screen. If you don’t have an iPhone, many cars also offer Android Auto as an alternative.

Recently, Apple announced a huge update for CarPlay is planned for the end of next year. It will add more customization capabilities for drivers, vehicle climate controls, and other features. However, it’s unclear whether every automaker will take advantage of the update.

The popularity of Apple CarPlay and Android Auto 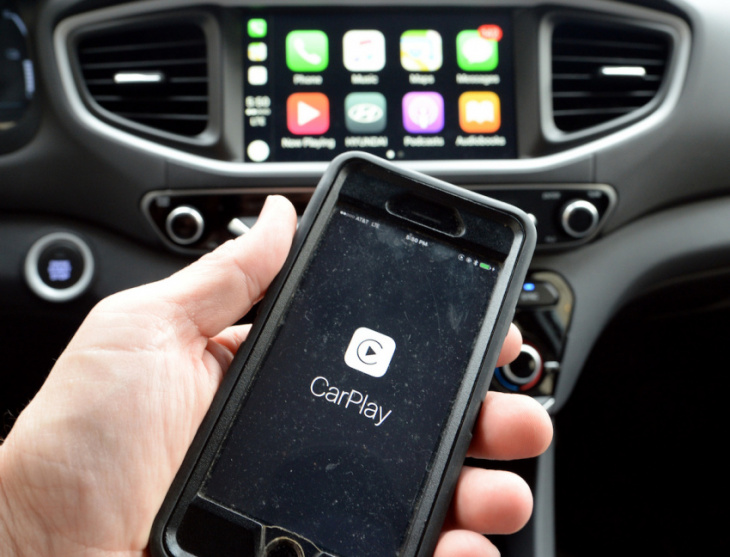 As of 2021, 80% of new cars offer Apple CarPlay support, CNBC reports. Though it was originally an optional feature on mainstream vehicles, increased availability has led to the feature becoming standard. Wireless Apple CarPlay is more common on higher-end trims and models, but there are some exceptions.

According to recent studies, 56% of drivers look for Apple CarPlay when shopping for vehicles. CNBC says 23% of drivers won’t even consider buying a vehicle that doesn’t have CarPlay. Because those stats are from 2017, it’s safe to assume those numbers are probably greater with the widespread implementation of CarPlay nowadays.

One year after Apple CarPlay came out, Android Auto debuted in the 2015 Hyundai Sonata. Though it operates similarly to CarPlay, Android Auto still has some noticeable layout differences. Android Auto also has more third-party apps, and some reviewers say its digital assistant is easier to use than CarPlay’s Siri.

Which automakers will accommodate the new Apple CarPlay?

The upcoming software update promises to add Apple CarPlay functionality to compatible cars’ digital gauge clusters and any other vehicle screens. You’ll be able to check your car’s fuel or battery level, driving speed, and mileage through CarPlay. The new update will even allow you to view weather forecasts and control your car’s stereo and heat seats.

Per CarScoops, Apple has already revealed some mainstream and luxury car manufacturers that might support the software update. Ford, Honda, Hyundai, and Nissan are on the list. Most of the revealed Apple CarPlay partners are luxury brands such as Audi, Infiniti, Lincoln, Mercedes-Benz, and Volvo.

However, the official statements from these automakers seem to indicate the news isn’t set in stone. For example, Mercedes-Benz officials say any new technologies must be reviewed in-house before implementation.

According to The Verge, Ford refused to provide additional comments for supporting the upcoming Apple CarPlay update. General Motors and Toyota spokespeople also hinted that neither company had committed to installing the new update. Only a handful of companies, including BMW and Polestar, have concrete implementation plans in place.

The Verge speculates this hesitancy stems from existing obligations with other tech companies, notably Google and Amazon. Additionally, Apple software notoriously doesn’t allow for much customization outside of what the tech giant provides. Automakers might want to work with a software company that gives their engineers more freedom.

Android Auto is ahead of the game

Though Android Auto doesn’t have any big updates planned, it already has some customization features that Apple CarPlay lacks. In addition to providing more apps, Android Auto also makes it easier to toggle which notifications are displayed on which screens. Plus, automakers have the freedom to develop their own infotainment interfaces to work alongside Google’s software.

According to one automotive connected mobility expert, Apple is more concerned about maintaining the “Apple experience” across all of its software applications. That might make things easier for most Apple product users, but such rigid standards don’t appeal to most automakers.

Keyword: New Apple CarPlay: It’s Still Not Clear if Manufacturers Will Bend to Make It Happen

Apple iPhone Maker Foxconn Would Like To Build EVs For Tesla: CEO

Foxconn wants to be for Tesla what it is to Apple

Does the Ford Mustang Have Apple CarPlay?

Does the 2023 Kia Soul Have Apple CarPlay?

Does the 2023 Chevy Bolt EUV Have Apple CarPlay?

FILE PHOTO: The Apple logo is seen during the preview of the redesigned and reimagined Apple Fifth Avenue store in New York (Reuters) -Apple Inc has scaled back ambitious self-driving plans for its future electric vehicle and postponed the car’s target launch date to 2026, Bloomberg News reported on ...

Apple scaled back its self-driving car, dubbed Project Titan by employees, and plans to debut it in 2026, Bloomberg reported, noting that the project has been in limbo for the past several months. After realizing that a fully autonomous vehicle without a steering wheel or pedals isn’t possible with ...

Elon Musk was given a tour of Apple’s headquarters by CEO Tim Cook. The Chief Twit thanked Cook for taking him on the tour and shared a video of a path near a pond.  Although it is not known what the two talked about, Elon Musk shared concerns on ...


View more: Does the 2023 Chevy Trailblazer Have Wireless Apple CarPlay?

The idea of an Elon Musk-led company creating a smartphone has caught the imagination of many over the years, so much so that some YouTube channels continue to peddle the alleged release of products like the “Tesla Pi Phone” that’s supposedly poised to compete with Apple’s iPhone and other ...

Apple’s Crash Detection Calls 911 From Roller Coasters, but What About Cars?

Does the 2023 Chevy Equinox Have Apple CarPlay?

Does the 2023 Chevy Traverse Have Wireless Apple CarPlay?

Tesla Could Be Worth More Than Apple, Saudi Aramco Combined: Musk

Does the 2023 Genesis Electrified G80 Have Apple CarPlay?

What Are the Benefits of Wireless Apple CarPlay Adapter?

Things I noticed about my XUV700's Apple CarPlay after iOS 16.1 update

Does the 2023 Jeep Grand Wagoneer Have Apple CarPlay?

Apple’s car is already beloved before it even exists

SpaceX in talks with Apple about Starlink connectivity for the iPhone

New Apple Watch, iPhone Can Call For Help If You're In A Car Crash

Apple’s Car is beloved before it even exists

How Does Using the Apple CarPlay Affect an EV’s Driving Range?

Apple TV+ Announces Nine Kids and Family Shows — When Will They Air?

Does the 2023 Kia Carnival Have Apple CarPlay?