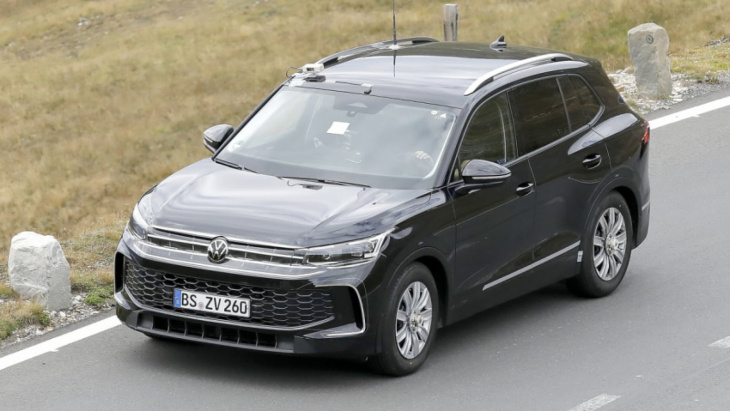 The third-generation Tiguan has been spied testing once again in minimal camouflage, suggesting that its full reveal may be imminent.

Volkswagen won’t be looking to change the design too much for the new model, and with the looming 2030 ban on internal combustion cars, plus VW’s focus on its all-electric ID models, it could be the final iteration of the Tiguan. We’d expect the new car to run right up until 2030, although there is still the possibility that the Tiguan may continue in some form by switching to pure-EV power.

Like previous test cars, the front of this one shows a revised grille with a closed-off upper section which gives it a similar face to its ID siblings, while the lower grille has grown compared to previous test cars for extra engine cooling. The front bumper has also been changed and now incorporates larger side air intakes.

The proportions of the new car look similar to current Tiguan, but it looks like it’ll grow in size to be closer to the Touareg SUV; it’s not clear whether we’ll see another seven-seat Tiguan to rival the likes of the Mercedes EQB. At the rear, there’s significant suspension droop which might be caused by a new hybrid system. Also at the back we expect to see two individual rear light clusters rather than the full-width LED rear light VW likes to keep for its ID cars.

The MQB Evo platform that underpins the Mk8 Golf, Cupra Formentor, Audi A3 and Skoda Octavia should be used for the next Tiguan, given it’s an evolution of the MQB A2 found on the outgoing car. This would allow the new Tiguan to use the same range of plug-in hybrid powertrains as the Golf. 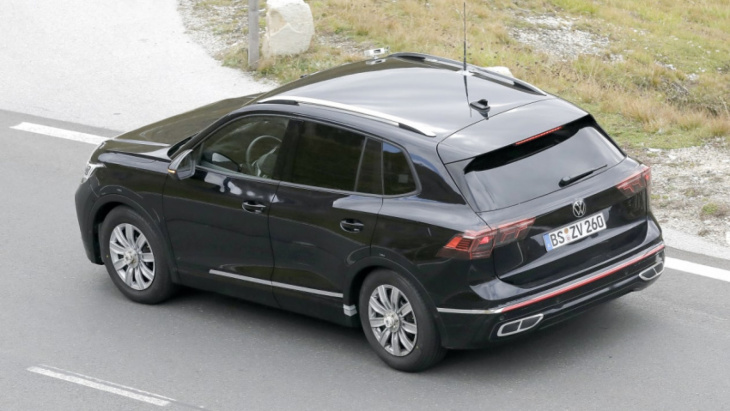 We can also expect a similar engine lineup to the Golf with a mix of petrol and TDI diesel engines alongside the hybrid models. The larger, heavier Tiguan will probably forgo the Golf’s entry-level 109bhp 1.0-litre unit, starting with the 148bhp 1.5-litre turbocharged petrol four-cylinder. A mild-hybrid eTSI version could also feature. 148bhp and 197bhp diesel models could make their way over from the Golf and above that, we expect to see a plug-in hybrid model with 238bhp. A hot Tiguan R with running gear lifted from the Golf R is a possibility.

We expect the inside of the new Tiguan to look similar to the upcoming facelifted Golf, rather than the minimalist cabins of the ID cars. A new version of VW’s Digital Cockpit Pro should feature a larger iteration of the 10-inch found in the current Golf. Practicality should be improved with the addition of the MQB Evo platform too, with boot space rising from the current car’s 520 litres.

Now read our review of the Volkswagen T-Roc R…