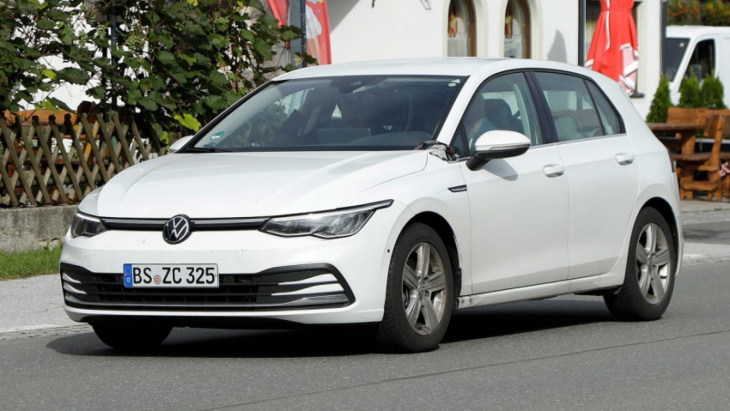 Volkswagen has come under fire in recent years with criticism aimed at the firm’s usually class-leading infotainment system. The latest VW Golf in particular has certainly drawn plenty of condemnation for its use of touch-sensitive panels to control the car’s air-conditioning.

VW has already looked to improve the MIB infotainment setup earlier this year by developing a more responsive, user-friendly adaptation of the Golf’s interior technology but now it appears the family hatchback will gain a more significant update inside.

These new spy pictures show Volkswagen is developing an updated Golf, although the changes look restricted to the infotainment.

The 10-inch touchscreen on the dash looks to have doubled in size vertically and the increased size of the screen could result in a change of infotainment design. The touch-sensitive climate controls look like they’ve been retained at the bottom of the screen however.

The current Mk8 Golf features a brace of 10-inch screens as standard, one central touchscreen and one driver’s display. It’s not known whether VW will reserve the larger screen for higher-spec models with the 10-inch screen being retained for entry-level cars or make the new screen standard across the range.

Volkswagen extended its recent infotainment upgrade to its pure-electric cars on the MEB platform and it’s likely this new screen will also be made available to other brands within the VW Group.

Volkswagen is keeping its promise of making software improvements to the ID.4 crossover. The company announced a comprehensive round of digital updates that includes new features for the infotainment system and more information displayed in the instrument cluster. The updated software was developed for all 2021 and some 2022 ...