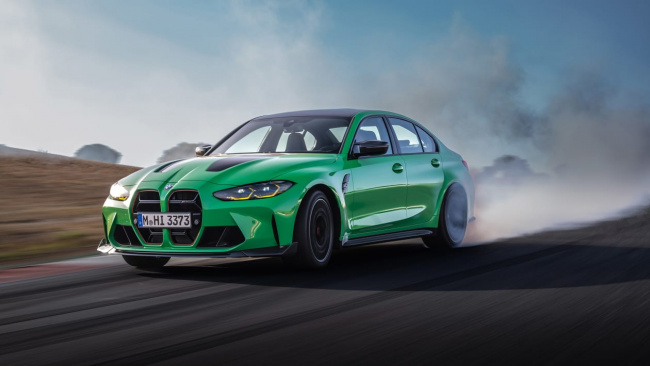 BMW has revealed the latest addition to the M family in the form of the M3 CS, a new top-line iteration of the G80 3-series that blends the hardcore M4 CSL’s 542bhp straight-six engine and lightweight carbonfibre components, with the more practical body and all-wheel drive system of an M3 Competition saloon. Priced from £115,900 it will go on sale in March as a series production model.

By taking the more powerful engine from the M4 CSL the new M3 CS packs a 39bhp increase over the Competition xDrive on which it’s based, with its 542bhp peak achieved at 6250rpm ahead of the 7200rpm redline. Torque remains the same as the Competition at 479lb ft, but is available over a slightly wider rev-band between 2750 and 5950rpm; the M3 Comp’s torque begins to tail-off at 5500rpm. The S58 3-litre engine gains its additional power by increasing the pair of turbo’s boost pressure from 1.7 to 2.1bar, and remapping the engine management system to suit.

Stiffer engine mounts have also been used that has allowed BMW M to use the CSL’s more aggressive gearbox mapping. The xDrive system is carried over from the M3, with the ability to de-couple the front driveshafts via the car’s driving mode software with an electronically-controlled limited-slip differential also standard equipment. .

Fastest of all its contemporary G80 siblings, the new M3 CS completes the zero to 62mph sprint a tenth-quicker than a four-wheel drive M3 and three-tenths quicker than the M4 CSL in 3.4sec. It reaches 124mph in 11.1sec and goes on to a 188mph maximum.

As part of the CS’s transformation BMW M has applied a handful of lightweighting measures, replacing the standard aluminium bonnet with the CSL’s carbonfibre unit and its lightweight centre console. This is in conjunction with BMW M’s carbon pack that includes the roof, mirror caps, splitter, intakes surrounds, rear bumper insert and lip spoiler, which is an option on the M3 Competition models but standard on the CS. The exhaust system also features a new titanium silencer further reducing weight by 4kg.

Inside the M3 CS you’ll find BMW M’s bucket seats, extended leather on the doors and dash, plus an Alcantara steering wheel. These join the 2023 model year updates that have been rolled out across all 3 Series models that include a new streamlined dash and curved infotainment screen. Externally, look beyond the new carbon bonnet and the aesthetic changes from a standard M3 are limited to the CSL’s yellow DRLs, grille inserts and some brash new colour options.

BMW is claiming a 20kg weight reduction over an M3 Competition XDrive, which would make the new CS weigh in at around 1760kg. That’s 95kg up on the 1625kg M4 CSL (as claimed, our tested figure comes in at 1640kg), although the CSL’s lightweighting measures are both more drastic, with that model also only rear-wheel drive.

The M3 CS’s chassis setup is completely bespoke, with new kinematics and camber adjustments made to both axles. There are also new damper rates, auxiliary springs and bespoke anti-roll bars, all of which are even more track-focused than the already intense Competition models. The power steering system has also been recalibrated to suit the chassis and performance upgrades.

Further chassis enhancements include the CSL’s 19- and 20-inch front and rear wheels being fitted, which wear a standard set of Michelin Cup 2 275/23 ZR19 tyres and 285/30 ZR20s front to rear. It’s expected that UK market CS models will also be offered with a less extreme Pilot Sport 4S option, as is the case with the CSL. The Competition’s cast iron brakes are standard, but carbon ceramics are available as an option.