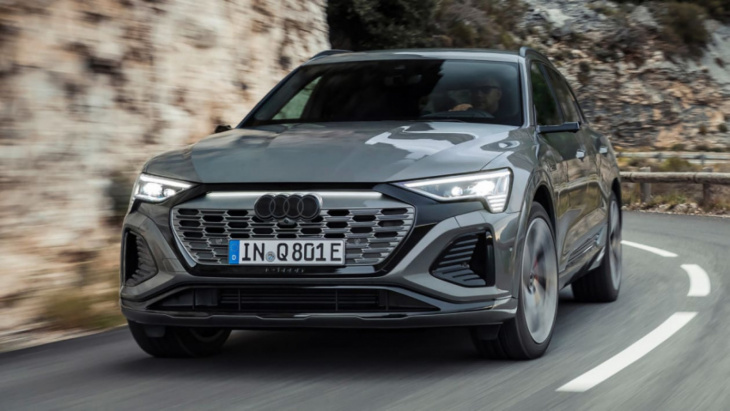 Audi has treated its e-tron electric SUV to a facelift, incorporating major technology updates, more subtle styling changes and an all-new name. The new Q8 e-tron is now on sale, priced from £67,800 and with first UK deliveries targeted for April 2023.

The entry-level Q8 e-tron 50 Sport kicks off the range, and it features an upgraded 95kWh battery with up to 281 miles of range for the regular SUV and a claimed 290 miles for the more aerodynamic Sportback. The Q8 e-tron 55 and SQ8 e-tron both use a larger 114kWh battery. For the 55, which starts from £77,800, this delivers up to 330 miles in the SUV and 343 miles in the Sportback, while the £97,800 SQ8 e-tron does up to 284 or 295 miles for the SUV or Sportback versions respectively. This represents an increase of more than 73 miles over its e-tron S predecessor.

The greater efficiency has been achieved by optimising battery cell chemistry, Audi says, along with more advanced energy-management software and packaging of the cells, plus tweaks to the rear motor windings. There are now 14 coils instead of 12, allowing the motor to generate more torque from the same electrical current. 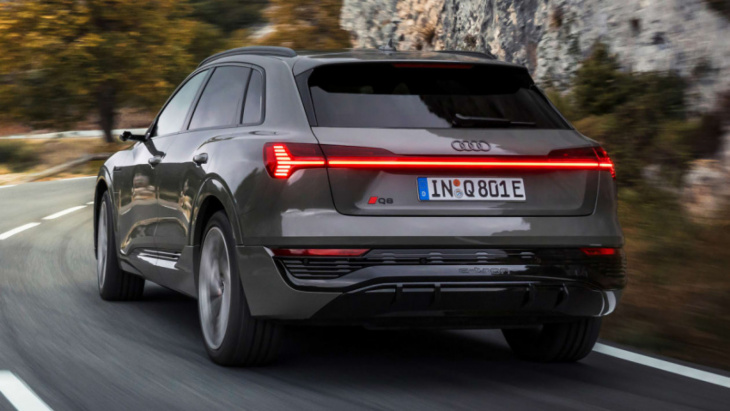 The smaller-battery 50 model can charge at a maximum rate of 150kW, while the bigger-battery cars push this up to 170kW. As a result, a 10 to 80 per cent charge takes 28 or 31 minutes respectively. All Q8 e-tron models feature standard 11kW AC charging (nine hours and 15 minutes for a full charge on the 50).

Audi Board Member for Technical Development Oliver Hoffmann said: “We were able to increase battery capacity and charging performance. This allowed us to achieve an optimal balance between energy density and charging capacity. We also improved the motors and the dynamic characteristics that are typical of Audi in all versions of the Q8 e-tron.”

Upgrade to the S line and you’ll get 21-inch wheels, adaptive sport air suspension, S line front and rear bumpers, tinted windows, sportier seats and a three-spoke steering wheel with an ‘S’ logo. In 50 e-tron trim, the S line costs an additional £5,000. Spend £2,350 more in 50 or 55 guise and you can get the ‘Black Edition’, which adds gloss black wheels, black door mirrors, window surrounds, grille and bumper trim. The three-spoke leather steering wheel gets a flat-bottom style.

For an additional £14,650 you can step up to the range-topping Vorsprung equipment level. Over the Black Edition this adds 22-inch wheels, a Vorsprung logo in the Audi headlight beam, virtual door mirrors, adaptive windscreen wipers, front “Super Sports” seats with S logos, a carbon inlay to the interior and heated leather steering wheel. It also includes various packs as standard, including a Bang and Olufsen sound system, 360-degree camera, four-zone climate control, adaptive cruise control and park assist.

The SQ8 e-tron model is only available in Black Edition or Vorpsrung, but whatever model you choose, the Sportback coupe-SUV is offered at a £2,500 premium. 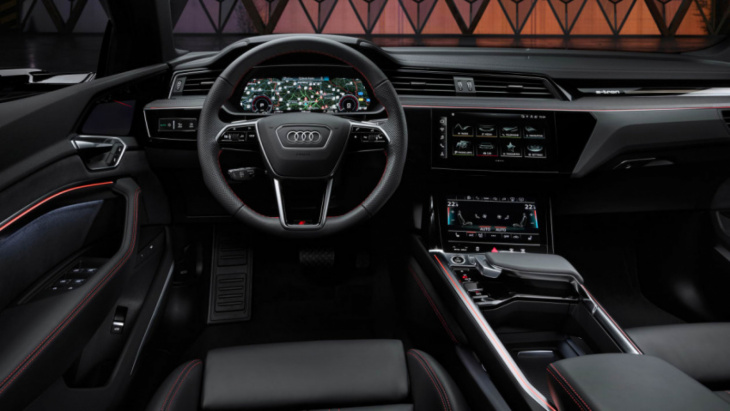 Standard-fit modified air suspension, a new ESC calibration and tweaks to the progressive steering are said to boost the car’s agility and responses, combined with more rigid suspension bearings in the front axle.

For the Q8 e-tron, Audi’s designers have tweaked the front-end styling to redefine its look as part of the brand’s e-tron electric range. There’s a new e-tron GT-inspired grille, with a gloss black panel surrounding the main air inlet, while the revised LED clusters (digital matrix LEDs are standard on top-spec cars) are joined by an LED strip at the top of the grille. Audi says aerodynamics played a significant part in the new car’s styling, with the SUV’s drag coefficient dropping from 0.26 to 0.24Cd, and the Sportback improving from 0.28 to 0.27.

The cabin isn’t too far removed from that of the model it replaces. Boot space stands at 569 litres for the SUV and 528 litres for the Sportback, while both cars feature a 62-litre front storage area.

With an increasing focus on sustainability, the Q8 e-tron features a significant number of recycled materials in its construction. There’s also a new 2D four-ring Audi logo on the grille, while the lettering and Audi badge on the B-pillars are new touches.

The Q8 e-tron updates are part of an Audi range revamp. The next A4 saloon will be renamed the A5, while the A6 model will become the A7 as the A6 e-tron all-electric saloon takes its place in the line-up. Indeed, the brand has already revealed a sleek A6 e-tron concept, which will become a production reality next year, based on the firm’s PPE platform for pure EVs and sharing technology with the 2023 Q6 e-tron.

Expect an A4 e-tron model in time, with the A7 and A5 to be sold alongside the A6 e-tron and A4 e-tron models, giving Audi buyers a choice of powertrains.

Audi Australia has confirmed that a plug-in hybrid variant of the Q5 mid-size SUV will be landing locally in the second half of 2023. Available to order now, the 2023 Audi Q5 55 TFSI e Plug-In Hybrid combines a 2.0-litre turbo petrol engine with a 14.4kWh battery pack for up ...

An Entry Level Luxury BEV That Audi Buyers Will Feel At Home In While many brands are just now dipping their toes into the battery electric vehicle pool, Audi has been swimming around in it for quite a few years, and is making even more waves with perhaps their most ...