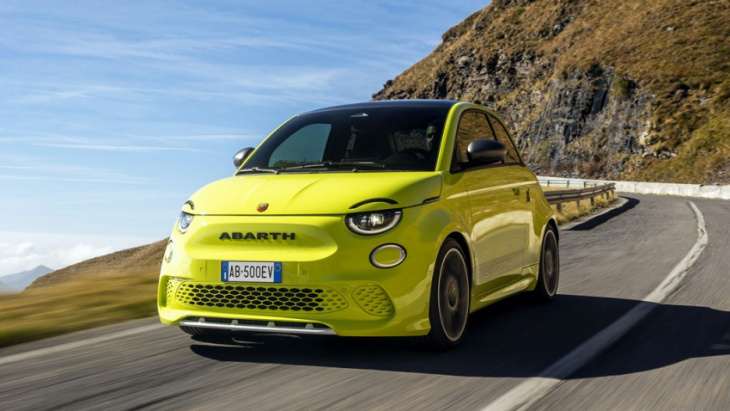 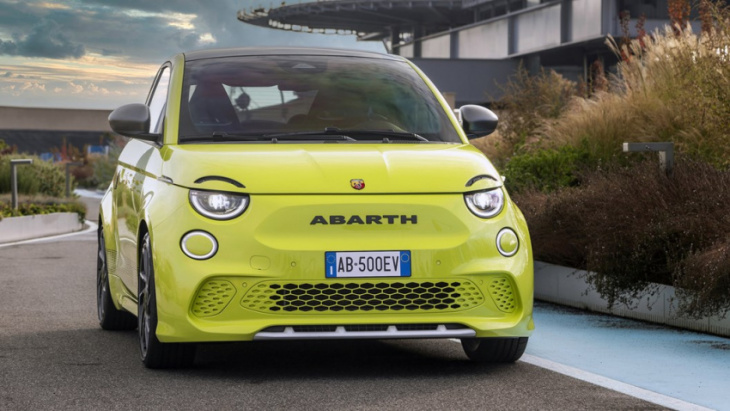 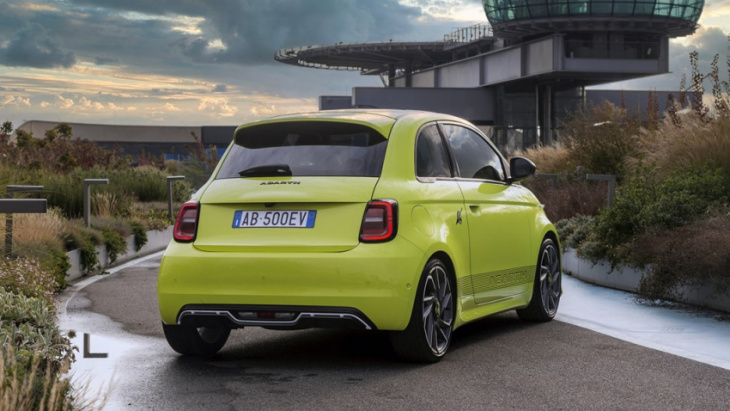 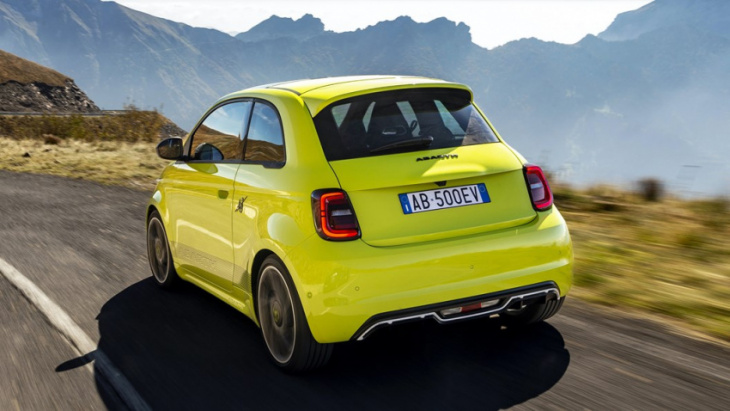 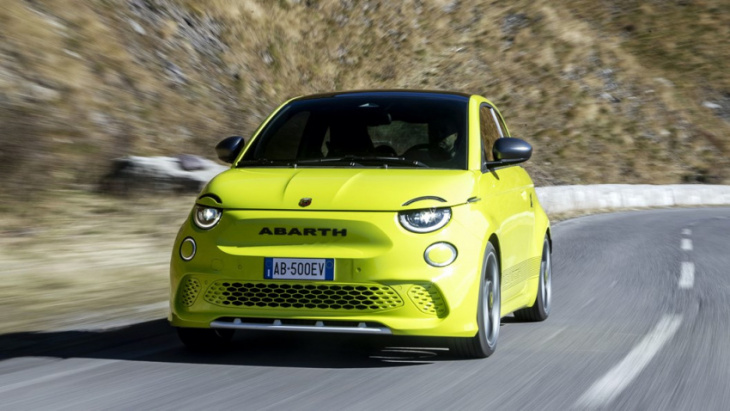 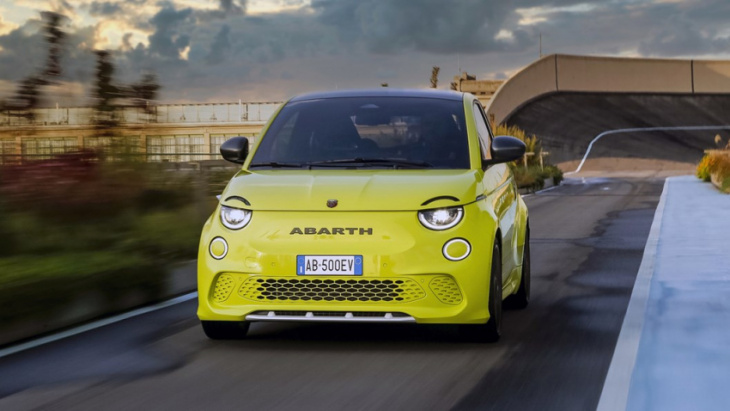 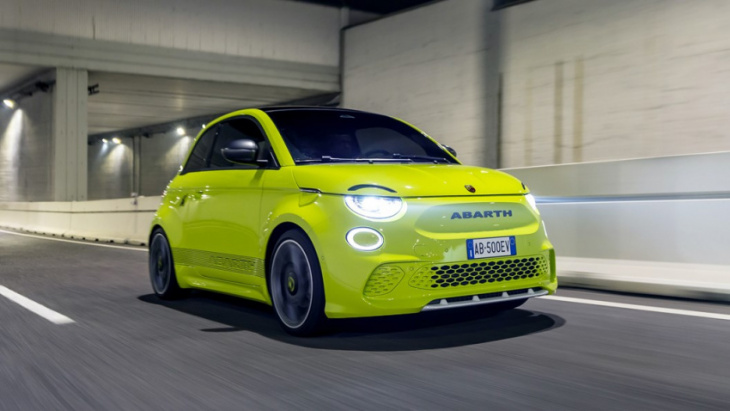 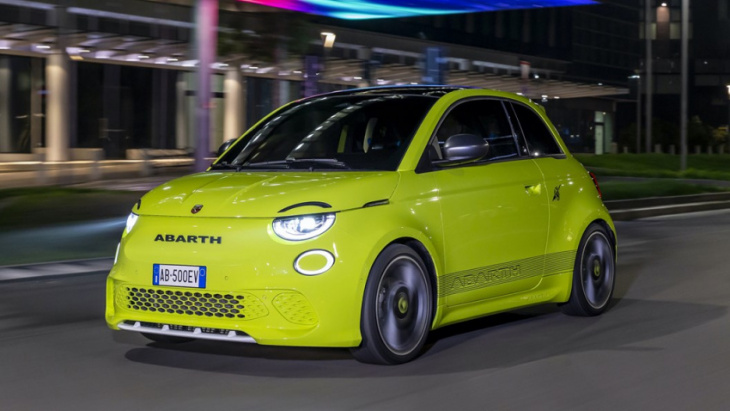 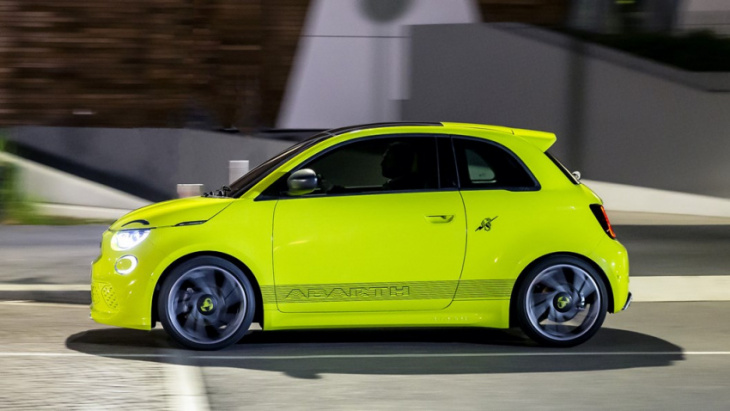 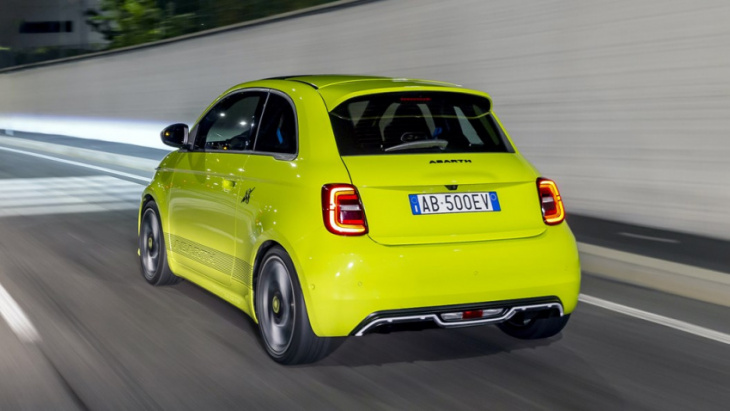 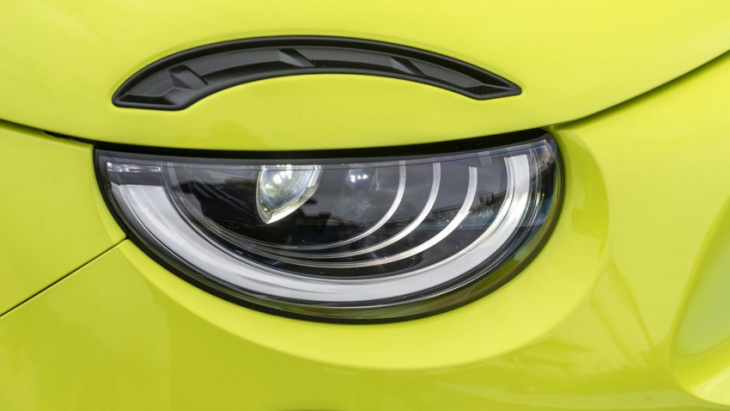 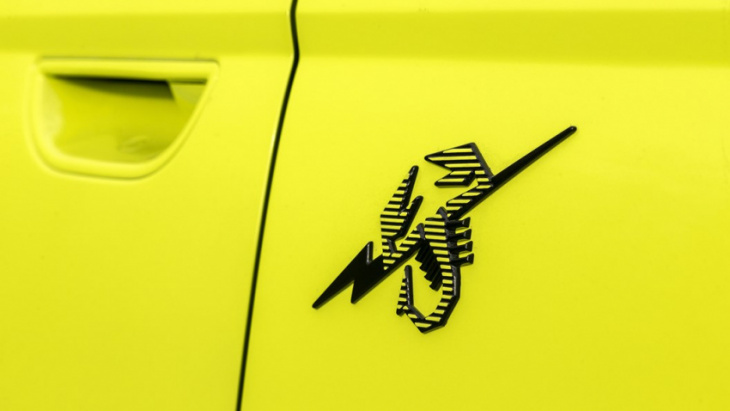 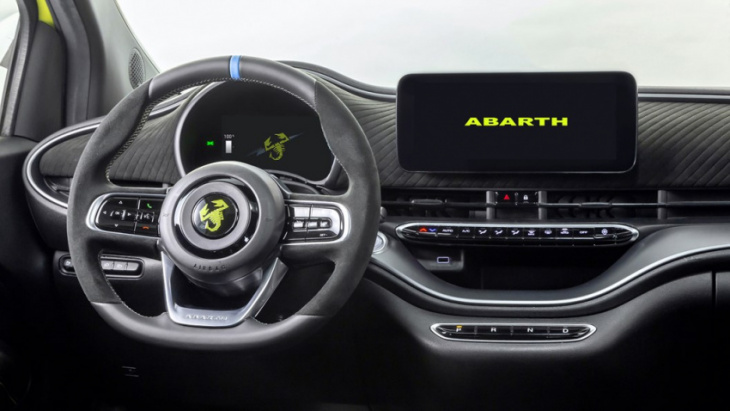 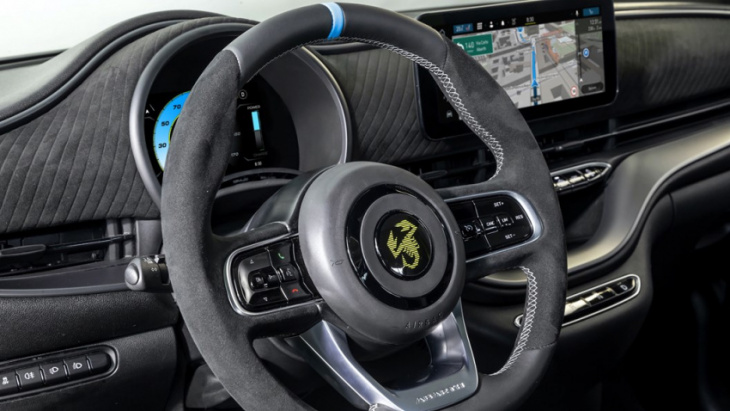 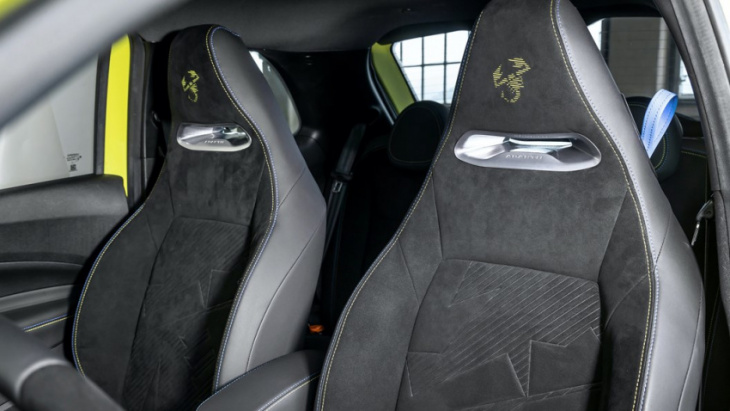 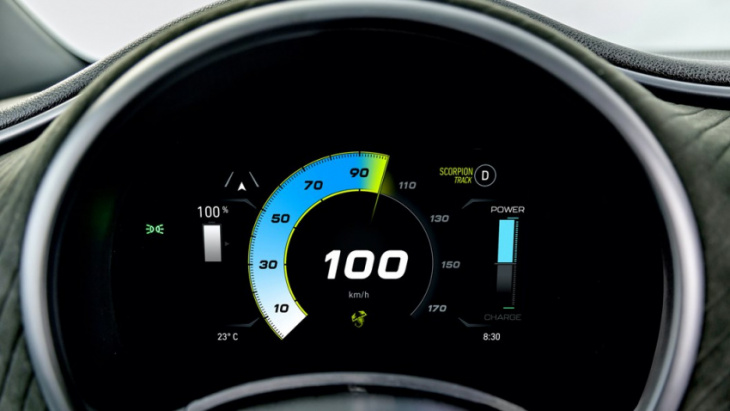 This is the new, all-electric Abarth 500e hot hatchback. It’s the replacement for the company’s long-lived Abarth 595, which has been on sale in various guises for the past 14 years. Like its predecessor, it’s a hot version of the Fiat 500 hatchback, but this one is powered by electrons rather than petrol.

The Abarth 500e features the same 42kWh battery pack as the most long-legged version of the standard Fiat 500e, but it features a more potent electric motor and a sharper chassis. As a result of the changes, Abarth says the new car is faster and more exciting to drive than the old 595. 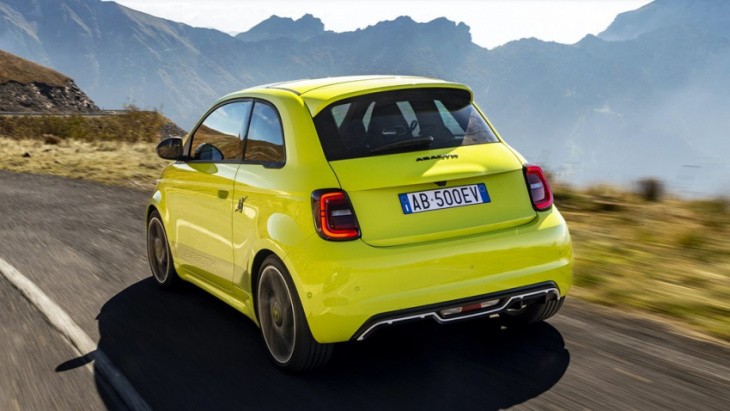 It produces 152bhp (36bhp more than the standard Fiat 500e), which Abarth claims is enough for a 0–62mph time of seven seconds flat. The company also says its new car can dash from 25 to 37mph in 1.5 seconds, making it a full second quicker than the outgoing petrol model. That means the new car should be better at overtaking and nippier around town.

Despite some very prominent naysaying from the Abarth community, the firm steadfastly insists that this new electric model will be as exciting (if not more so) than its much-loved petrol model. A key aid for this excitement factor is the company’s new ‘Sound Generator’ system, which hopes to silence the cynics and give Abarth an edge over its competitors in one fell swoop. 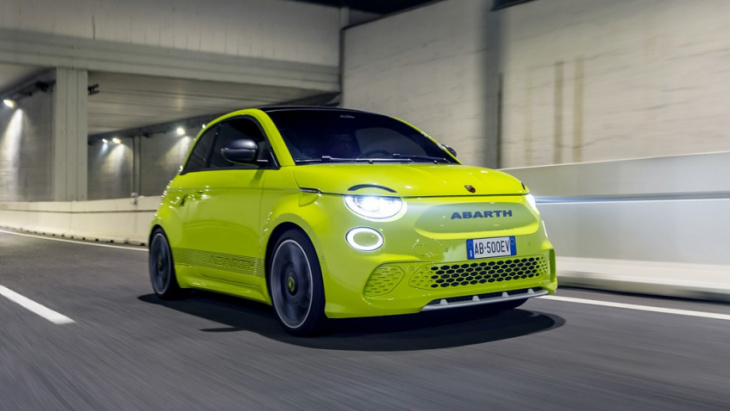 The system features a set of speakers under the car which ‘faithfully reproduce the sound of an Abarth petrol engine.’ It’s linked to the throttle pedal so, as you accelerate, the sound of the ‘engine revs’ build as they would in a petrol car. Abarth is currently the only manufacturer in the small EV segment to offer a system like this – and the firm hopes it’ll attract petrolheads.

Abarth hasn’t yet told us how far its new 500e can travel on a single charge, but we assume it’ll be less than the 205 miles of the longest-range Fiat 500e, thanks in equal measure to the racier electric motor and more aggressive body kit. Thankfully the charging system hasn’t changed – a fast-charge to 80 percent capacity still only takes 35 minutes on the Abarth.

What about the handling?

Abarth reckons it’s better than ever. Despite the added weight of the battery pack and a 20bhp deficit, the company says the new Abarth 500e can lap Alfa Romeo’s Balocco test track more than a second quicker than the old petrol-powered Abarth 695.

This improvement has a lot to do with the new car’s chassis. Because it’s based on the same platform as the Fiat 500e, the Abarth 500e has a 24mm longer wheelbase, a 60mm wider track and a more balanced weight bias of 57 to 43 percent between the front and rear axles respectively. 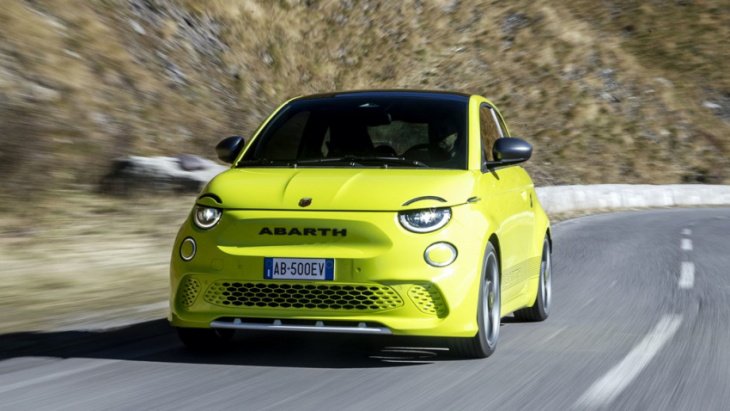 The electric motor plays a big part in the faster track times, too. It produces 173 lb/ft of torque, all of which is available the moment you flex your big toe. There’s no turbo lag to wait for. Abarth says this instant response allows the car to slingshot out of bends quicker than the petrol-powered 695.

When does it go on sale?

It’s available to pre-order now and Abarth says the first deliveries will arrive in June 2023 in Europe. Prices haven’t yet been confirmed– but we do know that the first cars on sale will be trimmed in the company’s Scorpionissima launch edition specification. Production will be limited to just 1949 examples as an homage to the company’s founding year. 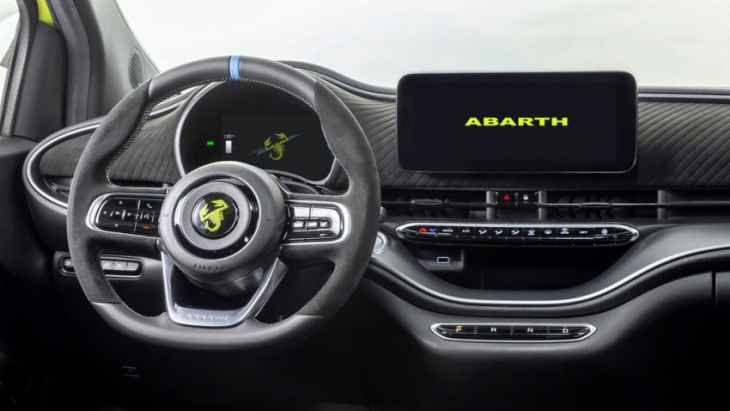 Abarth is also taking the launch of its hot 500e as an opportunity to expand its reach on the global market. The biggest news is that it’s heading back to Brazil to satiate a screaming demand from customers in the region. Fiat enjoys a 22 percent market share in the Latin American country – and its expecting sales of the first pure-electric Abarth to be strong there. 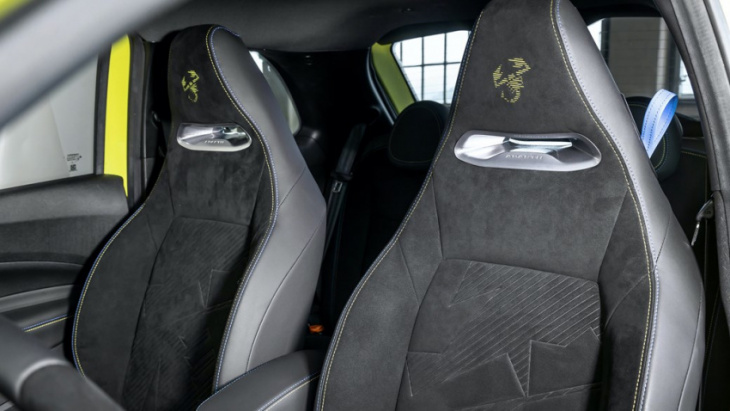 However, if you want one, now might not be the best time to buy. During the Abarth 500e’s online launch event, the company’s CEO Olivier Francois confirmed that his engineers are already developing an even faster variant.

He said: ‘This is just the first episode in our electrification story. Our engineers – our performance nerds – are already working to give this car a big brother. Even faster, even meaner and, why not, even louder? But this is for tomorrow.’ 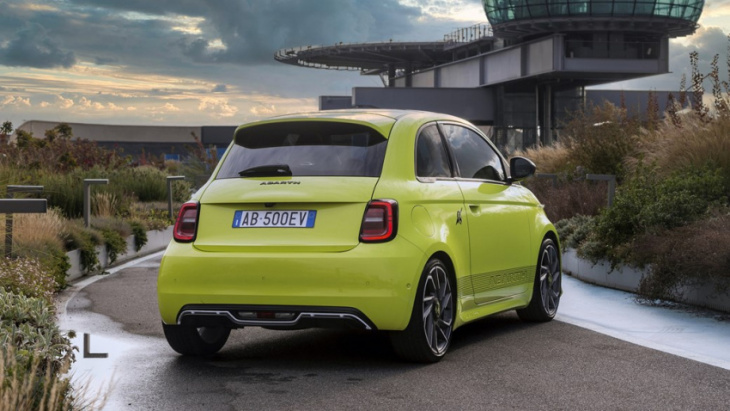