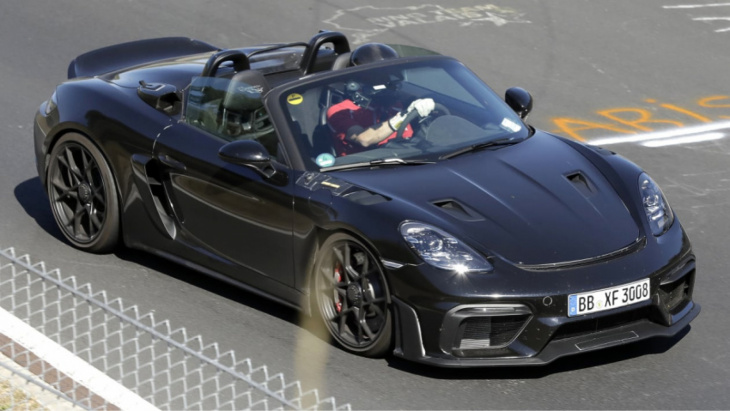 Porsche’s track-honed GT4 RS is set to receive a drop-top Spyder variant and we’ve caught for the first time testing – complete with fabric roof dropped. While there have been Porsche RS cars with Targa roofs in the past, the GT4 RS Spyder marks the first time we’ll see the RS as a fully-fledged convertible.

As we’ve already seen on the Cayman GT4 RS, the Spyder gets a vented bonnet, wheel arch louvres and vertical aero channels from the coupe. This pre-production car shares its centre-lock wheels with the GT4 RS too, and the simplified fabric roof is reminiscent of the lightweight version of the previous Boxster Spyder.

The new roof frees up a sloping double-bubble rear deck, which kicks up to form a sizable active ducktail spoiler. Given that the coupe is fitted with an enormous rear wing, Porsche appears to have slightly reprofiled the 718 Spyder RS’s front splitter to account for the reduced rear downforce. That said, we could still see the Cayman GT4 RS’s ‘swan-neck’ rear wing feature on the Spyder.

There are also new top-mount air intakes for the mid-mounted engine. On the GT4 RS, the intakes are integrated into the rear side window, but the fabric convertible roof of the Spyder means they have to sit further back. If the GT4 RS is anything to go by, the original side intakes will be repurposed for cooling.

At the rear of this prototype, the diffuser and twin exhaust set-up remains the same as the standard 718 Spyder. The RS’s engine, however, will be a 4.0-litre 496bhp flat-six taken from the 911 GT3. Expect a redline of 9,000rpm and a 0-62mph time not too far off the GT4 RS’s 3.4 seconds. The Spyder should get close to the 196mph top speed of the Cayman, and will come equipped with an automatic PDK gearbox. 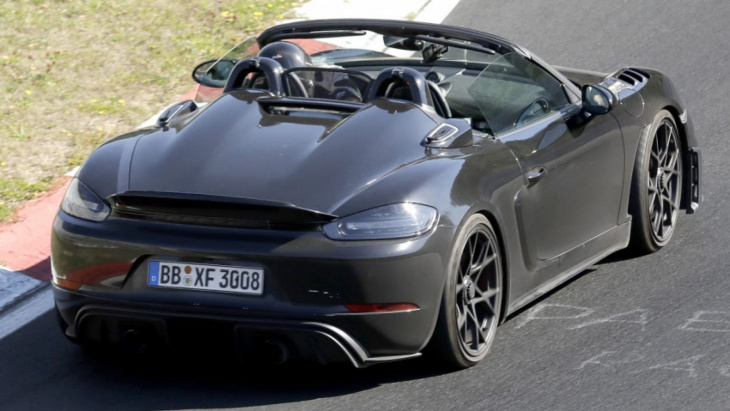 The latest pics also reveal the GT4 RS Spyder’s interior for the first time. It has bucket seats from the Weissach package with a pair of roll-over hoops peeking from behind.

Given the GT4 RS was priced from £108,370, we can expect the convertible variant to cost slightly more. With less interference between the driver and the excellent engine, the Spyder RS may even be the better option.