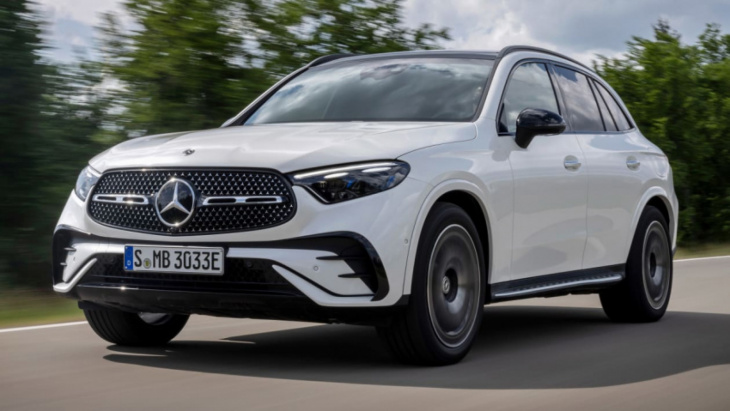 The new second-generation GLC is now here and Mercedes is offering some form of electrification across the premium mid-size SUV’s whole range. The GLC is the firm’s best-selling car globally, selling 2.6 million units since 2008 (including the GLK-Class predecessor).

On sale now with first deliveries expected in January 2023, the GLC will once again rival the BMW X3, Audi Q5 and the Volvo XC60, but also pure-electric SUVs such as the Audi Q4 e-tron, Tesla Model Y and Kia EV6.

To make sure the new car has the tools in its armoury to stay competitive, Mercedes has looked to electrification, starting out with three 48-volt mild-hybrids then above them a duo of plug-in hybrid powertrains that offer over 62 miles of electric range. There’s no all-electric version of the new GLC; the EQC SUV (which sits on the same platform as the old GLC) will continue in that role for a little longer before a new bespoke electric SUV replaces it.

Moving to Mercedes’ newer MRA2 platform shared with the C-Class, the German firm has penned an evolutionary design update for this big-selling SUV. It has grown in size, but only fractionally, so it’s still a direct rival for cars such as the BMW X3, Audi Q5 and the Volvo XC60.

The redesigned front end adopts the brand’s latest design language. New-look headlights now blend into the front grille, finished with a striking look on AMG Line models that makes use of a Mercedes three-pointed star pattern. A sporty looking front apron also features on AMG Line cars, with an off-road-inspired chrome-edged front end on other models. 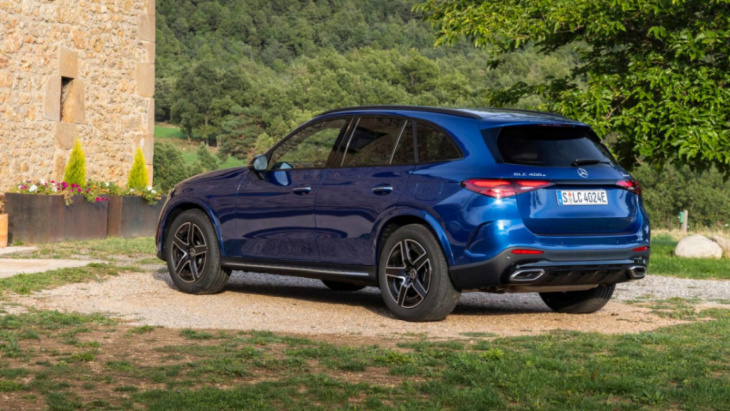 In profile the GLC’s design features new contour lines, while body-coloured wheel arch trim is now available for the first time ever on the GLC, housing wheels ranging from 18 inches to 20 inches in diameter.

The rear-end design is familiar, evolved gently over the current model. Further differentiation can be optioned via the choice of running boards – and for AMG Line models and above a Night styling package introduces black exterior detailing.

At 4,716mm long, the new GLC is 60mm longer than the old model, while the car is 4mm lower. The track widths front and rear expand by 6mm and 23mm respectively, but across the body the new model is actually no wider than its predecessor.

A lot of the new car’s extra length is due to a longer rear overhang – a move Mercedes claims benefits practicality, with a boot that’s now 50 litres larger than before, at 600 litres with the rear seats in place. All versions come with a powered tailgate as standard.

Inside, the GLC takes on a C-Class-inspired revolution. The ageing interior of the old model has been brought right up to date and the new look makes use of a ‘wing’-like dashboard design with a large, curved centre console. An 11.9-inch portrait oriented touchscreen and a string of touch-sensitive switchgear, angled towards the driver, also feature. 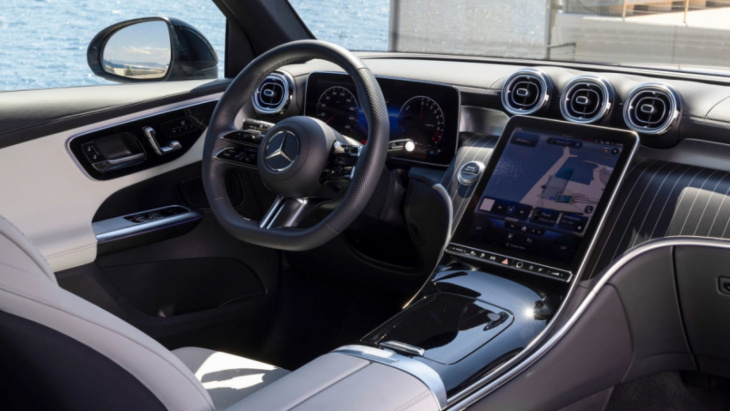 Within the string of buttons is a fingerprint scanner, enabling different drivers to log in to their own personalised MBUX profile. The MBUX touchscreen is also compatible with over-the-air software updates, keeping vehicle systems and functions up to date. This capability also allows new optional features to be installed on the car by purchasing them in the Mercedes Me Store app.

In front of the driver is a configurable 12.3-inch digital instrument panel, which can be supported by an optional head-up display. Further new infotainment features include Newsflash, which extends the Mercedes Me voice assistant’s features to include personalised news bulletins from a selection of news sources, read aloud by the assistant on request.

From launch, there will be two trim levels of the GLC. An Avantgarde model will kick off the range with slightly more subdued exterior styling, where the higher-spec AMG Line model brings a sportier look and larger alloy wheels as standard.

All versions of the new GLC are fitted with a nine-speed automatic transmission and Mercedes’ 4MATIC four-wheel drive system as standard, while power comes exclusively from a line-up of turbocharged 2.0-litre four-cylinder engines. Petrol and diesel models with 48-volt assistance are joined by a the three-strong plug-in hybrid offering, but no AMG versions of the newcomer have been confirmed just yet.

A selection of driving modes will also be available, making it possible to tweak the powertrain, steering and even the engine noise emitted from speakers (which can be turned off). 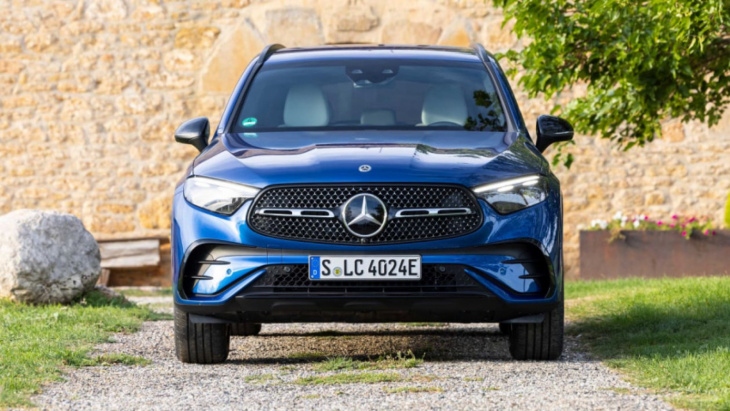 These versions of the GLC all come with a new, second-generation version of Mercedes’ 48-volt mild hybrid tech, but the level of electrical assistance is still minor. Electric-only running isn’t possible, and instead, the system enables seamless engine-off coasting at speed and an electric boost of up to 23bhp, which can help reduce the load on the engine under hard acceleration.

However, it’s the new plug-in hybrid technology that really advances this new GLC’s powertrain offerings. There’s one petrol-powered model and a plug-in diesel option. Both use the same 31kWh battery alongside an electric motor producing 134bhp and 440Nm torque. Mercedes claims that each model can cover more than 62 miles on battery power alone and can travel at speeds of up to 87mph without using the engine. It also has hinted that up to 81 miles of pure-electric running could even be possible.

Mercedes has carved out a niche among premium brands for offering diesel plug-in power alongside petrol PHEV options, and the new GLC continues this tradition with the 300 de 4MATIC. Pricing hasn’t been announced for the diesel plug-in hybrid yet, but it will join the line-up later.

Powering it is a turbocharged 2.0-litre diesel engine combined with the same battery and motor tech as its petrol-electric counterparts to pump out 242bhp and 750Nm. CO2 is claimed from 13g/km, again qualifying the diesel for the eight per cent BiK tax band rating.

Official claimed fuel economy stands at 564.9mpg. That’s not a typo, but more reflective of how the large battery dominates proceedings during WLTP testing, and the petrol plug-ins come with similarly outlandish official fuel economy claims. Nonetheless, keeping the battery topped up and the GLC running frequently on electricity should see these three models easily stand out as the most frugal and efficient options in the line-up.

From launch, there will be three trim levels of the GLC, the AMG Line, AMG Line Premium and the AMG Line Premium Plus. We could potentially see a cheaper Avantgarde model in future, which will feature more subdued exterior styling, whereas the higher-spec AMG Line model brings a sportier look and larger alloy wheels as standard. The AMG Line versions feature a sports suspension as standard while the plug-in hybrids all have air suspension and self-levelling rear axles.