Slick tires do not work in the rain. 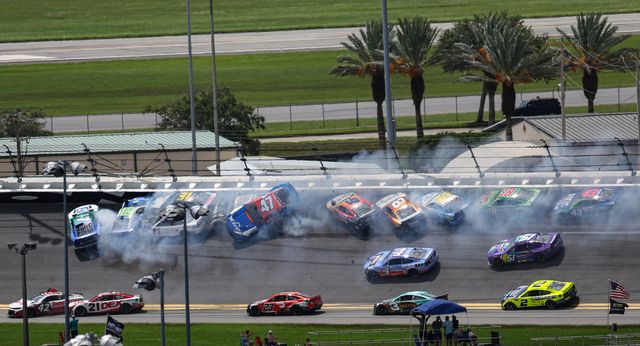 Over the past few years, NASCAR has developed kind of a strange habit. It has become increasingly comfortable waiting to throw a caution for dangerously wet conditions, leading to wrecks that could be attributed entirely to the wet surface at Texas Motor Speedway in 2020, Circuit of the Americas in 2021, and, most notably, New Hampshire Motor Speedway in 2021. Despite all this, NASCAR chose to keep a flat-out pack race at Daytona going as rain approached with less than 30 laps in today’s race. When the field hit a damp track, the predictable happened.

Here’s a look at the incident on Lap 138 at @DAYTONA. pic.twitter.com/6CySgUxG2r

Yes, those are the two side-by-side leaders spinning on their own in front of the field at the same time. Yes, the entire field proceeded to barrel into the crash. Yes, that’s one single car slipping underneath the massive wreck to go from 14th to the lead just before that potentially race-ending downpour.

“It was raining for a good lap before we got to turn 1,” driver Justin Haley told NBC. He went on to call it “Pretty unacceptable,” adding that “it was pouring in turn 1. You would think we would be a little more competent.”

Haley’s comments are not subtle. For the fourth time in three years, NASCAR has badly misjudged track conditions and allowed a race to continue until a wreck became inevitable. At COTA, the series had the excuse that cars on wet tires were capable of running in at least light rain. On the three ovals, with slick tires coming across a damp banked track at speed, this was never going to end any other way. The window between when rain first appeared on Haley’s on-board camera and the wreck was just 15 to 20 seconds, but that 15 to 20 seconds is the entire window of danger. After being bitten by this twice before, NASCAR’s race control team should have already adjusted to be more cautious with these calls; instead, they keep making the same mistake in bigger and bigger ways.

Austin Dillon, driver of the sole car in the lead pack to slide through the wreck as it happened, is scored as the race leader. If the race ends here, he’ll be added to the playoff field by virtue of this race win. Ryan Blaney, who has run in the top five of the championship battle all season but has not won a race, would be eliminated.