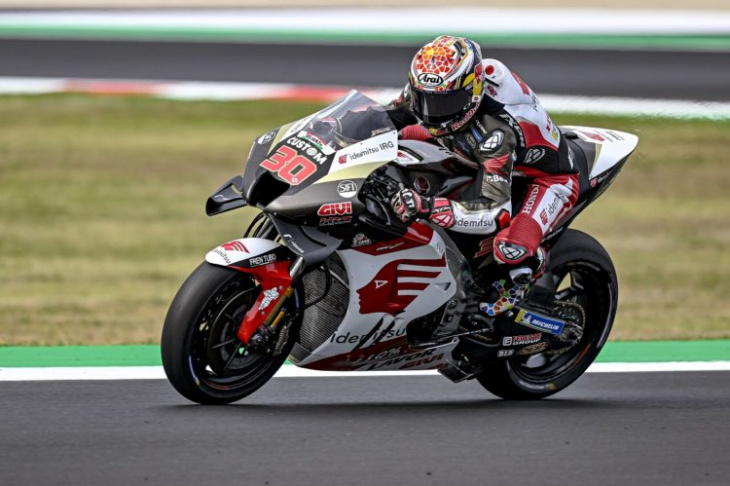 Takaaki Nakagami has been handed a further year with the LCR Honda squad in MotoGP for 2023, with Ai Ogura set to remain in Moto2 for another season.

Nakagami was thought to be under pressure to keep the second LCR berth alongside Alex Rins next year thanks to the impressive rise of countryman Ogura in the intermediate class this season, the 21-year old currently sitting just four points adrift of series leader Augusto Fernandez with six races remaining.

Ogura has been vocal though about wanting to remain in Moto2 for a further year to continue his development in any case, and with Honda replacing both Pol Espargaro and Alex Marquez in MotoGP for 2023 Nakagami alongside the returning Marc Marquez provides the experience Honda’s engineers need to help improve its tricky RC213-V.

Nakagami says he is “very happy” to have secured a further 12 months with the Italian outfit, insisting he was looking to “improve my performance” across the rest of what has been a tough ’22 campaign so far.

“I am very happy to be able to continue racing in MotoGP in 2023 with LCR Honda IDEMITSU,” said Nakagami.

Bezzecchi to remain at VR46 for 2023 MotoGP campaign

“I would like to thank IDEMITSU and Honda HRC for their continuous support and I am looking forward to the next season, and I will give it everything to achieve the best results with the team.

“Meanwhile, for the rest of this season, I will continue to work hard to improve my performance.”

LCR Honda Team Manager Lucio Cecchinello added that he has “trust” in the riding talent of Nakagami, and that his extensive experience in competing with the RC213-V over the past six years “will definitely help close the gap with our competitors.”

“We are very pleased with this announcement, since 2020 Taka has proved to be a very fast rider able to fight for podium positions and this year he has consistently fought to finish as the top Honda rider,” said Cecchinello.

“I trust in his potential and thanks to his six years of experience riding the Honda RCV213 motorbike, he will definitely help the LCR Honda IDEMITSU Team and HRC to improve our bike package and to close the gap with our competitors.”

Nakagami currently sits as the second-highest Honda riding in the points standings in 16th overall behind Marc, the two-time Moto2 race victor’s 46 markers leaving him four clear of factory man Espargaro and 11 ahead of LCR team-mate Alex with a best result of the term coming with a pair of sevenths in the Spanish and French Grands Prix respectively.

The news of Nakagami’s signing also means that only one seat is left officially unfilled on the 2023 grid at Tech 3 KTM – which will become the GasGas factory operation next year – though it is likely that Moto2 championship leader Fernandez will get the nod after it was recently revealed Remy Gardner would leave the KTM family after this season.


View more: The 2023 Acura Integra Borrows the Honda Civic’s Infotainment System (and Is Better for It)