Ford built the Cobra Jet specifically for drag racing, and it's not slow. 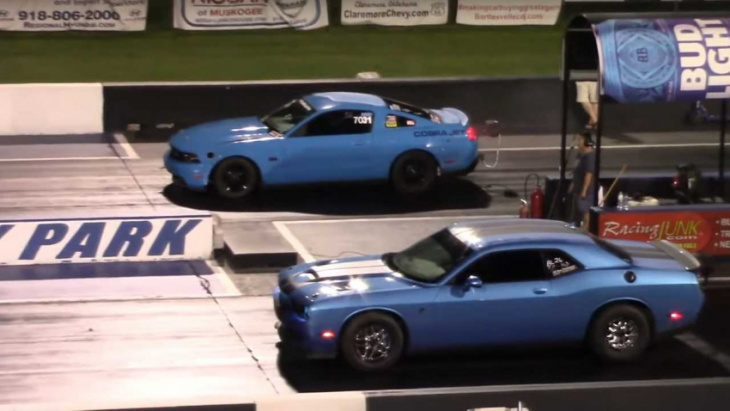 We’ve seen plenty of drag racing videos featuring Ford Mustangs, but it’s not often we see a Cobra Jet in action. You won’t find a new Mustang Cobra Jet at dealerships, nor will you see one on the road. That is, you won’t see one legally, as Ford builds these special Mustangs specifically for drag racing.

As such, Cobra Jets are quite rare so catching one in action is a treat. We don’t have details regarding the specific version seen here, other than to say it doesn’t have any problem dipping well into the 9-second range in the quarter-mile. The video comes from the Drag Racing and Car Stuff YouTube channel, and the Cobra Jet is the star as it faces a classic first-generation Mustang, an infamous “Terminator” Mustang Cobra from the early 2000s, and a Dodge Challenger Hellcat.

The first battle for the Cobra Jet is a classic Mustang fastback with fat slicks and engine components sticking out of the hood. It’s a generational battle that sees both cars launching hard on a pro tree (no yellow countdown to green, just a quick flash and go), with a breakout time of 9.10 seconds. If either driver goes faster than that, they are disqualified and the Cobra Jet gets close. It goes 9.18 at 132 mph, beating the old-school Mustang’s 9.36 time.

The next showdown sees a Dodge Challenger Hellcat in the opposing lane, and with a parachute hanging off the back you know it isn’t stock. Both cars lift the front wheels on the launch, but the Cobra Jet driver has a significantly better reaction time and pulls out to an early lead. It’s held all the way through the finish line, with the Mustang going 9.19 at 142 mph to the Challenger’s 9.37 at 140 mph. Chalk up two wins for the Cobra Jet.

The final race sees another Mustang enter the scene, this one wearing the front fascia of the notorious 2003-2004 “Terminator” SVT Cobra models. Whether it’s a legit Terminator or not is unknown, but with a supercharger sticking up through the hood and a parachute on the back, it’s a very worthy opponent. This showdown is easily the best race of the night, with both cars running very close to the 9.10 threshold in a side-by-side pass.

Who wins? We’ll save the outcome for the video, because it’s definitely a keeper.