Almost 40 years since a series production car was produced in Scotland — if you can call the 34 AC 3000MEs built in 1985 “series production” — the land of Robert the Bruce and Sean Connery is having another go at it. This time, however, it won’t be an awkward-looking mid-engine roadster powered by a weakling of a Ford Essex V6. Instead, if Munro’s press briefings are to be given any credibility, Scotland will become the home of the world’s most capable all-electric 4×4.

Details are sketchy for now, but thanks to a battery expected to pack as much as 80 kilowatt-hours of lithium-ion, the Munro MK_1 is said to be able to operate for up to 16 hours — range given as a time, not a distance, since it will presumably be doing a lot of low-speed rock-crawling — on a single charge.

And it certainly seems that the Munro will be spending most of its time out in the boonies, the company saying that its “prodigious all-terrain ability and advanced all-electric powertrain make it an ideal choice for those seeking to minimize their environmental footprint in numerous sectors including construction, agriculture, mining, forestry, mountain rescue, and remote infrastructure maintenance.”

Engineered to haul a “crew” of five, the MK_1 can also carry a payload of 1,000 kilograms, and, thanks to 376 horsepower — and 516 pound-feet of torque — haul a trailer that weighs 3,500 kilos. It is also said to be able to accelerate to 100 kilometres an hour in just five seconds.

More important, at least to Munro and its intended audience, is that the MK_1 “intensely focused on off-highway performance, reliability, ease-of-repair and longevity… to provide owners and operators with decades of service.” The departure angle, for instance, is a whopping 54 degrees, while the approach angle — eat this, Jeep owners — is an incredible 84 degrees. It’ll also, despite its electric architecture, wade through a stream almost a metre deep. 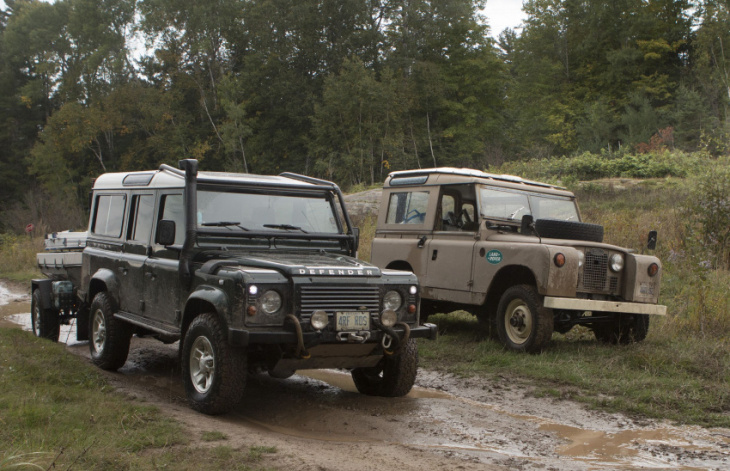 If this is starting to sound familiar — if the qualities of the Munro sound like a brochure for Land Rover’s original Defender 110, save for the zero tailpipe emissions — know that Scotland and its moors are home to an inordinate number of classic Defenders (like the Canadian ones pictured above, here). More importantly, if the only imagery yet released for the production version of the Munro — the drawing at the top of this article — is anything to go by, the Scottish MK_1 may prove a visual facsimile for the old 110. Seriously, if imitation be the sincerest form of flattery, then Munro really does love it some Defender.

In more practical terms, the company is hoping to begin production next year with a test run of 30 units. However, it does hope to be producing as many as 2,500 of the old-school berm-busters by 2026. According to CEO Russell Peterson, “North America is a key growth market, and we’re dedicating half of our 2023 production to left-hand-drive vehicles developed specifically for the U.S. market,” the company seemingly targeting Canadian forestry workers. U.K. pricing has been set at 75,000 pounds which, at current exchange rates, is about CDN$120,000.

If you’re interested, you’ll be able to see for ourselves how faithful this MK_1 remains to Old Blighty’s most famous farm vehicle on December 5, onwww.munro-ev.com. We’ll keep all you forestry engineers and shepherds posted.