Sometimes, the challenges to overcome aren't only at the track. 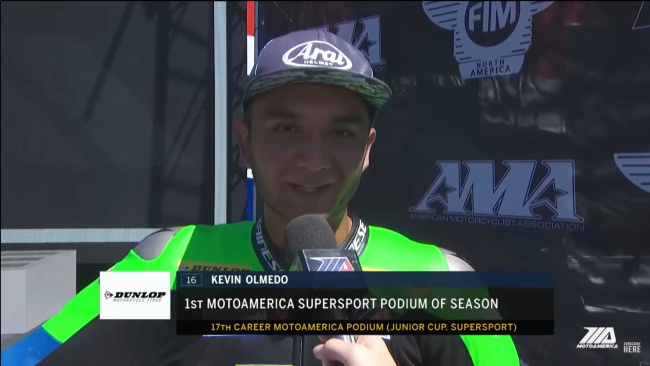 If you watched the MotoAmerica racing series at the beginning of the 2022 season, you may have seen N2 Racing/BobbleHead Moto Yamaha racer Kevin Olmedo compete in the Supersport class. Elsewhere in racing, Olmedo, along with teammates Josh Hayes and Emerson Amaya, also won the N2/WERA National Endurance race at Roebling Road Raceway in July, 2022. You could say that things were looking up for a clearly talented racer.

Unfortunately, health issues don’t care how good a day, career, or life you’re having. Olmedo, who hails from El Salvador, got on a plane to go back home, shortly after winning that endurance race. That’s when things started to get weird.

Once doctors were able to examine him and run tests, they figured out what was going on—and the news wasn’t good. Olmedo was officially diagnosed with Guillain-Barré syndrome, a rare neurological disorder where the body’s immune system basically attacks the nervous system. It’s considered rare, affecting around 3,000 people in the U.S. according to Johns Hopkins Medicine.

The Mayo Clinic says that “weakness and tingling in your hands and feet are usually the first symptoms. These sensations can quickly spread, eventually paralyzing your whole body. In its most severe form, Guillain-Barré syndrome is a medical emergency. Most people with the condition must be hospitalized to receive treatment.”

Although people with GBS may suffer different symptoms, at differing degrees of severity, things got quite serious for Olmedo. “I stayed in the hospital, and the next day, I lost all mobility of my body and face. It was really bad. It was really tough, because one day, I was traveling home after winning a race, and then I was paralyzed. I could not move any part of my body, but I was conscious. I could see and hear everything,” Olmedo added.

For over three months, he lost control over everything—including blinking and closing his eyelids. Carers had to tape his eyelids shut to help him sleep during that time, the entire time. Since he couldn’t eat, he was put on a liquid diet soon after—and said that he lost between 30 and 40 pounds as a result. He spent 12 days in the hospital, and then was sent home to convalesce—where he remained deeply paralyzed for about three months.

Six months after all this happened, Olmedo has begun the long process of recovery, which mainly consists of a whole lot of physical therapy. Right now, he’s working steadily toward his recovery. He’s now able to walk and drive a car by himself once more, but doesn’t know when he’ll be able to race again. He says that he’s hoping to make it to a race in the 2023 MotoAmerica season so he can see everyone in the paddock, though. You can read his thoughts on what he’s been through so far in the full interview he did with Roadracing World, which we’ll link in our Sources.

Shortly after Olmedo’s diagnosis, N2 Racing/BobbleHeadMoto crew chief Shiloh Salopek said, “I am saddened to hear about Kevin’s recent diagnosis. Our team stands beside Kevin and his family during his road to recovery, and we look forward to when he will be healthy enough to be back on his Yamaha YZF-R6 fighting for podiums.”