The sport-tourer arrives in two variants. 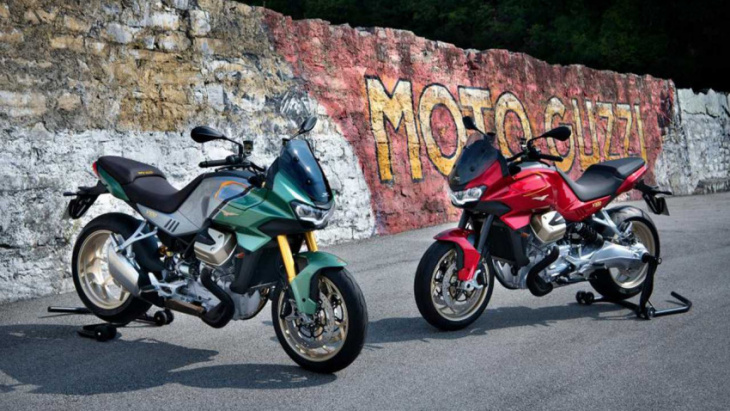 Moto Guzzi made sport-touring waves when it introduced its V100 Mandello in November, 2021. After causing such a commotion, the Italian brand kept further details under wraps for nearly a year. Now, it looks like Moto Guzzi is ready to finally unleash the V100 after announcing the model’s European pricing and availability.

The Mandello Del Lario factory kicked off its Moto Guzzi World Days 2022 festival this past weekend (September 8-11, 2022). And, the guest of honor? You guessed it, the 2023 V100 Mandello. Following the event, Moto Guzzi opened Italian pre-orders starting on September 12, 2022. As expected, the V100 will come in a base model and an up-spec S trim.

Both variants will benefit from the liquid-cooled, DOHC, 1,042cc, transverse V-twin engine. The new mill will pump out 115 ponies and 77.4 lb-ft of torque, making it the most potent powerplant in Moto Guzzi’s catalog.

A Marelli 11MP ECU helps corral all those ponies with four ride modes (Travel, Sport, Rain, and Road), while a six-axis IMU unlocks multi-level traction control and lean-sensitive ABS. Riders can control the robust electronics suite through the five-inch TFT display. The innovation doesn’t stop there either, as the V100 is set to debut the first adaptive aerodynamics system with tank-mounted wind deflectors.

On top of that impressive package, the S model adds Öhlins Smart EC 2.0 semi-active suspension, a quickshifter, heated grips, and Moto Guzzi’s MIA multimedia platform to the pot. The S-spec version will come in the premium Verde 2121 and Grigio Avangiuardia paint options and retail for €18,249 ($18,500 USD). The standard V100 Mandello, on the other hand, only goes for €15,749 ($15,950 USD). Moto Guzzi will offer the base model in Polar White and Magna Red colorways.

Unfortunately, the company hasn’t released availability or pricing information outside of Europe just yet. However, based on the MSRPs alone, we think the V100 Mandello will put up a valiant fight in the competitive sport-touring segment. It looks like Moto Guzzi isn’t done making waves, they’re just getting started.