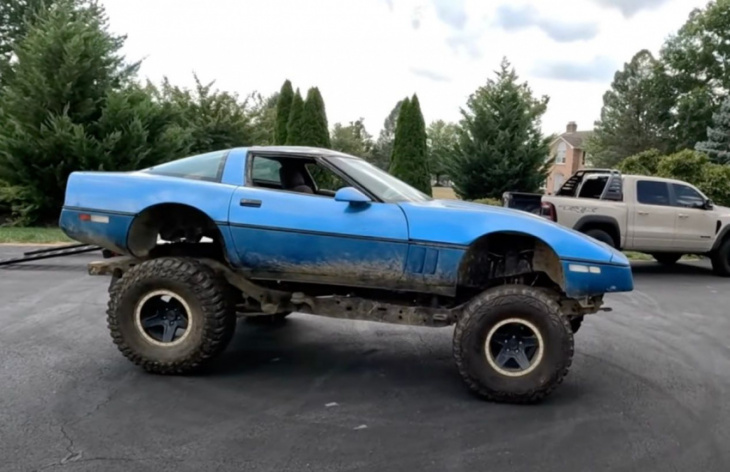 Would you drive this?

Here in the United States, in case you didn’t know, Corvettes are kind of a big deal, especially in performance groups. Originally made to combine a small and lightweight chassis with a  massive engine and great looks, the Corvette had  a  pretty big reputation to live up to. Needless to say, it pretty much exceeded nearly every expectation fans  of the brand had for it making it a legend in American automotive culture. Nowadays, there are many shows and events dedicated solely to the sports car with the biggest of them all being Corvettes At Carlisle. This show has been  known for  some  pretty crazy stuff in the past but this year’s event was extra special because of one vehicle that amazed practically everyone there.

The car in question is a C4 Corvette that resembles more of a monster truck than a sleek sports car, but we certainly can’t complain. On top you’ll see a Corvette body but underneath that beautiful exterior you might not really know what’s going on.It looks like something you might  find in the next Fast & Furious movie with its extremely high ride-height and roaring V8 engine. However, as the driver Mike from Street Speed 717, this Corvette is pretty much all ‘Vette on the inside as well as the body.

Holding the car up on all four sides is a set of massive wheels and tires which seem to be fit to transverse some wildly rough terrain. In fact, this car  sits atop the chassis of a Chevy Blazer which is the perfect frame for anyone with a taste for having fun on the road. Under the hood is clearly a V8 engine from the sound of things and the car apparently runs and drives pretty well, though turning seems to be a bit of a tricky endeavor. All of this  combined to make one incredible piece at the Corvettes At Carlisle event and we hope to see it again next year showing its colors once more.