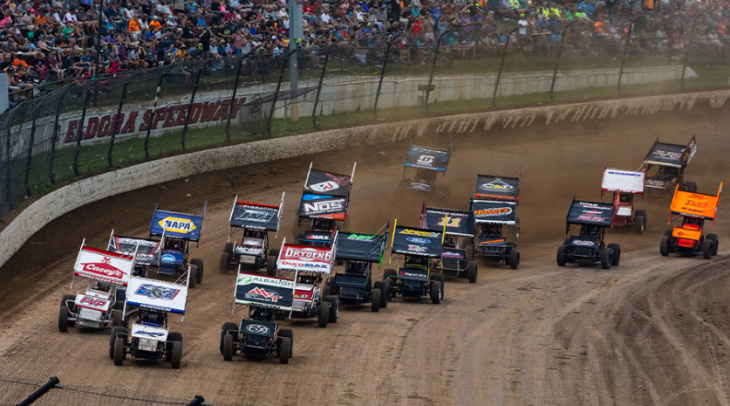 Winning with ‘The Greatest Show on Dirt’ is no easy task, and that’s why it’s ultra-special when it happens. Through the thousands and thousands of racers who have competed with the Series since Ted Johnson founded it in 1978, only 149 of the best have been able to score a victory through almost 3,600 races held over the 45 seasons.

In 2022, a pair of young guns added their name to the list, others padded their stats, and some set themselves up for the chance to hit a major milestone in 2023. In total, 18 different drivers stood in World of Outlaws victory lane this season with 13 of them doing so on multiple occasions – nearly breaking the all-time record of 14 multi-time winners from 2002.

Offering 69 officials wins this year, the all-time win list saw some significant shakeups, and we’re here to break that down. A full version of the list can be found at the bottom.

Donny Schatz, of Fargo, N.D., continues to lead the way among active drivers with 307 career wins, ranking third all-time behind “The King” Steve Kinser (690) and “Slammin” Sammy Swindell (394). The 10-time champion tacked on five more W’s in 2022, including an 11th Knoxville Nationals title. That brings his total to 225 since joining the Tony Stewart/Curb-Agajanian Racing No. 15 in 2008. 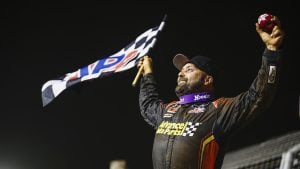 Donny Schatz in victory lane at The Dirt Track at Charlotte. (HHP/Chris Owens)

Behind Schatz, Brad Sweet and David Gravel will enter 2023 with the potential of reaching the top-10 on the all-time win list – something that hasn’t been done since 2018 when Daryn Pittman bumped Jac Haudenschild. They’re currently trailing Stevie Smith (84) and Pittman (86) as they reside in 11th and 12th on the list.

With an 11-win campaign, Carson Macedo became the ninth driver in history to stand atop the win column by himself. In a span of two years since joining the Jason Johnson Racing No. 41, the Lemoore, Calif. native has risen from 53rd to 35th to 23rd on the all-time win list with 28 career wins – doing so at only 26 years of age.

A nine-win season for Sheldon Haudenschild marked a career-best effort for the Wooster, Ohio native, who delivered the 100th win for the Haudenshild family this year. All 31 of his triumphs – including his miraculous $100,000 win at the Huset’s High Bank Nationals in June – have come in the Stenhouse Jr. / Marshall Racing No. 17 with NOS Energy Drink support.

Logan Schuchart and Jacob Allen delivered the winningest season yet for Shark Racing with nine total victories by the disciples of “Scruffy” Bobby Allen. Schuchart was a five-time winner in the No. 1S, moving him past his Hall of Fame grandfather and into 20th on the all-time win list at 35 scores. Allen enjoyed a breakout campaign with four wins – including a $25,000 Gold Cup Race of Champions title over his teammate – to jump into 62nd all-time at five total triumphs.

The winningest non-full-time driver in 2022 was Brent Marks, of Myerstown, Pa., with five wins aboard the Murray-Marks Motorsports No. 19. He topped Devil’s Bowl (Vt.), Williams Grove (Pa.), Knoxville (Iowa), and most notably Eldora (Ohio) – for a $275,000 sweep of the Historical Big One and Kings Royal – to highlight his career year and send him to 39th all-time with 12 career wins. 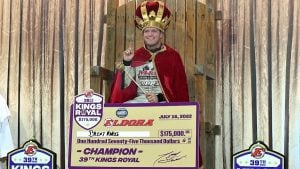 Kyle Larson, of Elk Grove, Calif., continued to shine in limited action, winning four races in 18 starts with Paul Silva’s guidance on the No. 57. At 28 wins ranking 23rd all-time, he’s the winningest driver in history to have never contested a full-time season and this year became the third-quickest to reach 25 wins (through 126 appearances).

At 57 years old, PA Posse legend Lance Dewease won three World of Outlaws races in a single season for the first time in his career – with all three coming at Williams Grove in the Kreitz Racing No. 69K. He’s now tied for 31st all-time with 20 wins alongside another Pennsylvania icon, Greg Hodnett.

Giovanni Scelzi, of Fresno, Calif., was twice a winner in his home state to bump his grand total to five World of Outlaws wins at the age of 20 years old. At Bakersfield (Calif.), the KCP Racing No. 18 pilot led the youngest 1-2 finish in Series history with 16-year-old Corey Day hot on his tail.

A winner at Bristol and Huset’s, Spencer Bayston became the seventh driver in history to score multiple wins during a Kevin Gobrecht Rookie of the Year campaign. The 24-year-old native of Lebanon, Ind. is now at four wins with three of those coming under the tutelage of Barry Jackson in the CJB Motorsports, TrueTimber, Signing Day Sports No. 5.

The winningest sprint car racer in the country this year, Anthony Macri finally made his maiden voyage to World of Outlaws glory in October with a Port Royal (Pa.) sweep. The 23-year-old sensation from Dillsburg, Pa. became the first driver since 1979 to earn his first two career wins in back-to-back fashion.

Before Macri, 20-year-old Buddy Kofoid, of Penngrove, Calif., added his name to the all-time win list with a Huset’s (S.D.) Speedway triumph aboard the Crouch Motorsports No. 11 – becoming the youngest winner with the series in 2022.

Delivering a milestone 99th win for Roth Motorsports, James McFadden scored his fifth career win at Lakeside when the Australian snapped an 81-race drought in October. Another dry spell broken was that of Rico Abreu, who claimed his ninth-career win (48th all-time) when he aced Eldora to end his four-year, 105-race winless streak.

“The Jonestown Jet” Brock Zearfoss earned his first win as a World of Outlaws full-timer at Cedar Lake (Wis.), marking his first win with the series since his inaugural score five years and 169 races ago in 2017. Brian Brown, of Higginsville, Mo., stopped his own streak of three years and 90 races without a win when he topped Knoxville for his sixth-career triumph, a win that was the first for Danny Lasoski as a crew chief with the World of Outlaws.