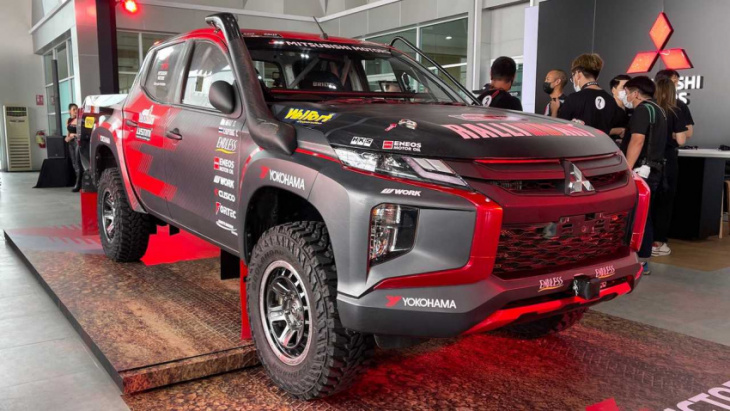 Mitsubishi Ralliart is definitely back. We’re not talking about the decal-riddled trucks announced earlier this year for Thailand. We mean that Mitsubishi is back in rally racing and that’s in the form of the Triton Ralliart that will compete at the 2022 Asian Cross Country Rally.

As the author is currently in Buriram, Thailand to witness the event’s flag-off, we’ve seen the rally racer in the metal and gotten up close to it. Here are some photos of the truck, taken before the actual gruesome endurance rally race started.

The Mitsubishi Triton Ralliart rally racer isn’t exactly just a Triton (or Strada/L200) showered with sponsor stickers. It also comes with mechanical upgrades that are necessary for the race.

Classified as an FIA Group T1 rally car, it came with obvious modifications for motorsports such as lightened hood and doors made out of carbon fiber, a roll cage, under guards, and a slightly tuned 4N15 turbocharged 2.4-liter MIVEC diesel engine. The output is still at stock figures at 178 horsepower (133 kilowatts) and 317 pound-feet (430 Newton-meters) of torque. The tuning focused on reducing friction and improving responsiveness in the mid-speed range.

This truck is Team Mitsubishi Ralliart’s contender at the 27th Asia Cross Country Rally (AXCR). The FIA-certified annual cross-country rally covers 1,056 miles (1,700 kilometers) of all types of terrain from the Kingdom of Thailand to the Kingdom of Cambodia, ranging from mountain, jungle, swamp, beachside, river, desert, plantation, tarmac, and even circuit together with the unpredictable weather conditions in this part of the globe.

Team Mitsubishi Ralliart is a private team owned by Tant Sports in Thailand. It’s backed by Mitsubishi Motors Corporation (MMC)’s technical support to join the AXCR. At the helm, Hiroshi Masuoka – a back-to-back Dakar Rally champion driver from 2002 to 2003 – leads the group as its Team Director.

No one is questioning that Mitsubishi Motors Philippines (MMPC) has been relatively quiet when it comes to new products of late. With the exception of the Xpander launched last May (and that’s even technically a refresh), the country’s solidly number two carmaker has just done special edition variants of ...


View more: Could a 2020 Eclipse Cross From Mitsubishi Be a Used Bargain?

The Japanese company is currently studying the van segment for some markets.

It’d be terribly boring if everyone liked the same thing, won’t it? Individuality is in the fabric of our existence, and despite what different people have varying opinions about the Motorsport, hey, Malaysia’s a free country. And as far as mod jobs go, the Xpander Motorsport has plenty of ...


View more: Family MPV with a dash of style, behind the scenes of making the Mitsubishi Xpander Motorsport

My family is looking for a larger car and I wanted to consider the Outlander instead of the newer SUVs. BHPian burst_mode recently shared this with other enthusiasts. Hello everyone, need some advice for the community. Any opinions on how viable buying a used Mitsubishi Outlander 2010 model would ...


View more: Considering a used Mitsubishi Outlander: Does it make sense to buy one

Mitsubishi XFC Concept is a futuristic preview from the Japanese firm