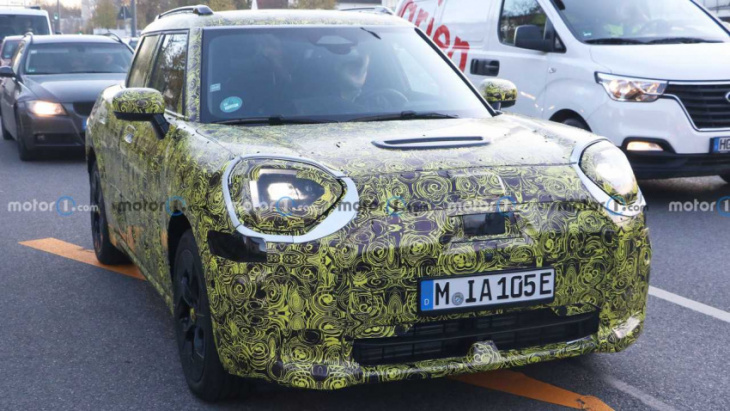 Our second official sighting of a Mini Aceman prototype takes us to Germany. Traffic was rather heavy around Munich when our spy photographer was out and about. As a result, we have some detailed images of a camo-wrapped test vehicle.

The wrap is identical to our first Aceman prototype sighting, only this time the small crossover isn’t tucked away on an auto transport. We get a better sense of size here, but don’t think this is just an electric Countryman. It’s actually a bit smaller, with sources telling us it could replace the Clubman in Mini’s lineup. That would leave space for the Countryman to soldier on with internal combustion power, while the Aceman offers a spacious EV for Mini fans.

And it should be surprisingly spacious inside. Without engines, transmissions, exhaust systems, or fuel tanks to consider, the Aceman will offer more room for passengers compared to the larger Countryman. Underneath familiar Mini styling will be a dedicated electric platform co-developed with Chinese manufacturer Great Wall. It’s the same platform used for the smaller Mini hatchback, albeit stretched out for duty on the Aceman.

We’ve already had a taste of how the production version will look. The Aceman concept debuted in July 2022, wearing a familiar-yet-different Mini face with a solid grille and angular headlights. We can actually see those headlights on this prototype, pointing inward with five sides in view. The oval-shaped trim around the lights is just a red herring designed to confuse the casual observer. BMW-style door handles are seen along the side, and Union Jack taillights are visible at the back. This is a Mini, after all.

We’ve yet to get a good look inside the Aceman. The concept features a minimalist layout with a large round screen in the middle and a projection system that can light up the entire dash with information. It’s unlikely we’ll see the projector in a production-spec Aceman, but the round center screen is certainly a possibility.

At this point, we could have a long wait to find out for sure. We’re hearing the Aceman won’t debut until 2024, though that could be a reference to the model year. If that’s the case, the covers could come off sometime later next year.

In the meantime, check out the Rambling About Cars podcast for the latest news on EVs, performance cars, and more.

Congestion Zones – Frank Augstein/AP Congestion charge zones urgently need to be widely implemented in towns and cities to meet climate change goals, ministers have been told. A £7 daily charge, imposed on motorists across parts of the country, is being proposed by bus operators. It is one of ...

Project details Price & Release Date The GMC Hummer EV Pickup, which starts at $84,650, is quite pricey even for an electric truck. Besides being big, heavy, and inefficient, it’s impractical for most pickup customers, though it’s highly desirable. It is likely that these aspirational Hummer fans will be ...

Only about half the bikes that started this race made it to the finish line.


View more: This Minibike Enduro Race Is Completely Out Of Its Mind In The Best Way

This one is wearing S Line badges.