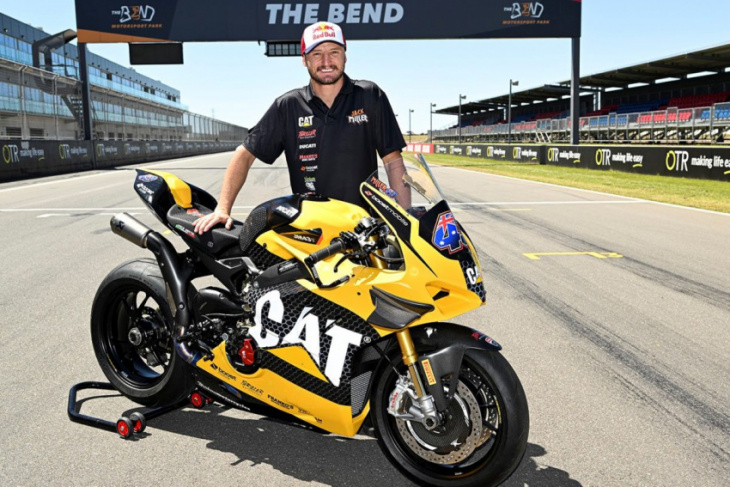 Jack Miller with his Ducati V4R at The Bend

Jack Miller has outlined the logistical difficulties in ensuring his three-bike team made this weekend’s Australian Superbike Championship round at The Bend.

For the second year in a row, Miller will make a cameo in the mi-bike Motorcycle Insurance Australian Superbike Championship presented by Motul, but this time he will have team-mates.

“It’s awesome to be back here, and to do it with the three bikes, it’s amazing,” said the four-time MotoGP race winner.

“To get everything together has been a nightmare; I can’t even begin to thank the people.

“Because, with posting stuff from Europe, shit getting lost, and then fairings getting painted on Thursday last week and flown in with one of the boys on Monday…

“So, it’s been a nightmare, but we managed to put everything together, ship it all down from Townsville, and we’re here to have a crack.

“None of the bikes have been tested. Franko [presumably from sponsor Franko’s Race Shop], who has absolutely no idea about a road bike, is the only one who has tested all three bikes, up and down Sturt Road where I live, so fingers crossed they go alright on the track.”

The Queenslander has returned home to race after completing what was his final MotoGP season with the Ducati Lenovo Team, and will ride for Red Bull KTM Factory Racing from 2023.

While Hook is a Honda rider in EWC and entered on a Honda CBR1000 SPL this weekend, and Marcel Schrotter on a Yamaha YZF-R1M, Miller will have his last hurrah on a Ducati, specifically a V4R.

It represents continuity for the latter given he was also on a V4R at The Bend in December 2021, when he crashed out of Race 1 but finished third in Race 2.

Asked if another podium is a reasonable goal, Thriller said, “Yeah, for sure; we’ve got a lot more experience than what we had last year.

“Last year was all brand-new, but I know the track; okay, the bike’s brand-new, but it’s very similar to what I rode last year, so we’ve got a new chance.

“Changing the tyres, we don’t really know what to expect there with the tyres. I mean, I rode them once at World Ducati Week and was pretty happy with them, so it’ll be interesting. I think we can do a good job.

“But yeah, it’s one of those weekends where I get to get my hands dirty and actually touch the bike a little bit.

“I don’t have to sit in my corner so it’s kind of nice to get back to basics again but with a competitive edge as well.”

Mike Jones (Yamaha) is the firm favourite to win the championship given he holds a 38-point lead over Bryan Staring (Ducati), and has another 11 points on Wayne Maxwell (Ducati).

Stan Sport’s coverage of the event starts on Sunday at 13:00 AEDT