Improved performance always has a price when it comes to new cars, whether it’s shelling out extra money for a mightier engine option or paying a yearly fee to hit 60 mph a second sooner. Wait, what? That’s right, Mercedes will soon offer an annual subscription to owners of its electric EQ models that lets them unlock additional power and quicker acceleration. It only costs $1200 plus tax. Every year. Welcome to the future. 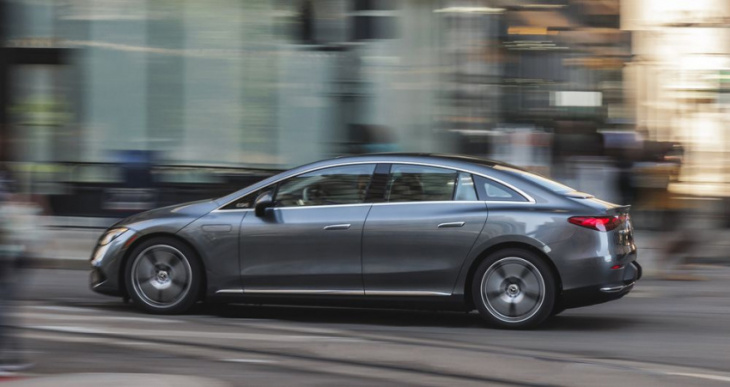 The practice of automakers instituting a subscription model for popular features has been a growing trend. It’s largely a byproduct of more and more new cars utilizing technology that allows over-the-air updates. Of course, charging consumers monthly or yearly subscription fees for content that is otherwise standard can tick people off, as BMW learned the hard way with its Apple CarPlay snafu.

Still, these on-demand options don’t appear to be going away anytime soon, and everyone will likely have an opinion on Mercedes’s soon-to-be-released “Acceleration Increase,” which is currently listed on the company’s online store.

So, what exactly does Mercedes’ $1200-plus-per-year performance upgrade get you? Depending on the model, it’s said to reduce the EV’s zero-to-60-mph time between 0.8 and 1.0 second. The only models the company lists are the all-wheel-drive EQE350 4Matic and EQS450 4Matic in both sedan and SUV configurations.

It’s currently not clear if the subscription-based performance upgrade is available on models other than the sedan and SUV versions of the EQE350 and EQS450. The Mercedes site also doesn’t state when the feature can be purchased and activated and whether or not it simply requires an over-the-air software update or something hardware-related that owners will need to have a dealer handle.

We reached out to Mercedes directly for clarification, and we’ll update this story once we hear back.

Located in the bustling metropolis of Yokohama, the showroom has all Mercedes-EQ models on display and a five-vehicle workshop.

The Mercedes-Benz 300 is a highly significant automobile to the history of the company, as it represented the company’s robust return to production following World War II. While the firm was forced to focus on smaller automobiles for practical transportation, it also revived its racing program—which offered both publicity ...

Different cars, different flavours A45 S  GT Four door After the track ► Mercedes Track Pace app tested ► In GT Four Door, A45 S and EQS► Is it worth having? Having a car with north of 500bhp, all-wheel drive and rear-wheel steering is great – but when do you ever get to ...

There are two transmissions underneath the car First S-Class to get AMG-specific body kits The Inside is like the regular S-Class but a bit angrier Of course it comes with high-tech AMG handling It's going to be expensive, as expected The Mercedes-AMG S63 is something else, featuring 800hp from ...