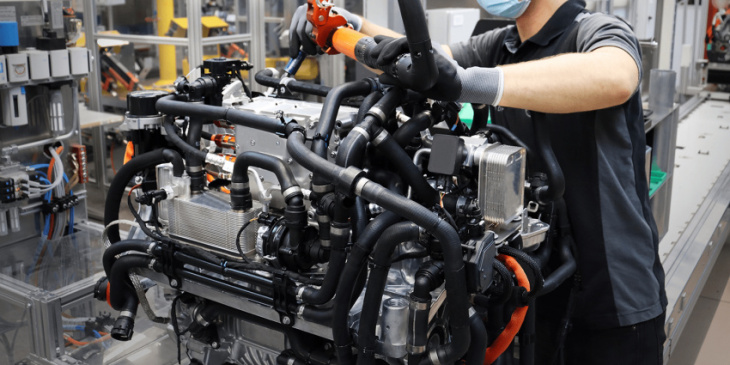 Mercedes-Benz wants to double its production capacities for electric drives at the Untertürkheim plant. Previously, up to 500,000 units per year were to be produced there, but now the Stuttgart company is aiming for output in the order of up to one million units per year.

This was first reported by the German publication WirtschaftsWoche with reference to insiders. In concrete terms, there is to be a works agreement on the doubling of production capacities, freshly signed by the works council and the management. In the meantime, Daimler has officially confirmed the expansion of the electric drive plans for Untertürkheim within the framework mentioned. Production of electric drives is expected to start there at the end of 2024. In essence, this is not new. Mercedes had already announced the date in the summer as part of a billion-euro investment offensive in the conversion of its European assembly plants.

Currently, batteries and axles for plug-in hybrids and fully electric Mercedes EQ models are already being produced at the Untertürkheim plant. In addition, the Stuttgart-based company wants to further increase its share of the value chain and, ergo, also insource the drive technologies. Against this background, Daimler 2021 has acquired the British electric motor specialist Yasa. The takeover gives Mercedes-Benz access to technology in the field of axial flux motors.

Instead of buying in the drives (as in the EQC and EQV, for example), the manufacturer will therefore in future expand its development competences and also the associated production. And in the case of Untertürkheim, the production targets have now been considerably expanded while still in the planning phase. As early as last year’s announcement by Daimler that it intended to introduce only electric platforms from 2025 onwards, the statement was made that “our own electric motors are an important part of the Group’s strategy – with a clear focus on the efficiency and cost of the entire system, including inverters and software”.

In the official communication from Mercedes, which was received subsequently, Jörg Burzer, Member of the Board of Management of Mercedes-Benz Group AG, responsible for Production and Supply Chain Management, among others, has his say: “Untertürkheim will continue to drive Mercedes-Benz in the electric age in the truest sense of the word. With production scales for our new Mercedes EQ models, we are setting up our traditional location in the Neckar Valley for the future and continuing to write its success story.”

The construction of the new assembly lines on the site of the Untertürkheim plant section as well as in the Bad Cannstatt plant section will begin next year. According to the new information, Untertürkheim and the Hedelfingen and Mettingen plant sections will manufacture and supply parts of the electric power unit in future.

Mercedes-Benz is known to want to become fully electric before 2030 – “wherever market conditions permit”. The new generation E-Class planned for 2023 will be the last new model from Mercedes-Benz on a pure combustion engine platform. All subsequent new model series from 2024/2025 onwards will be based on architectures that the Stuttgart company is developing specifically for electric vehicles.