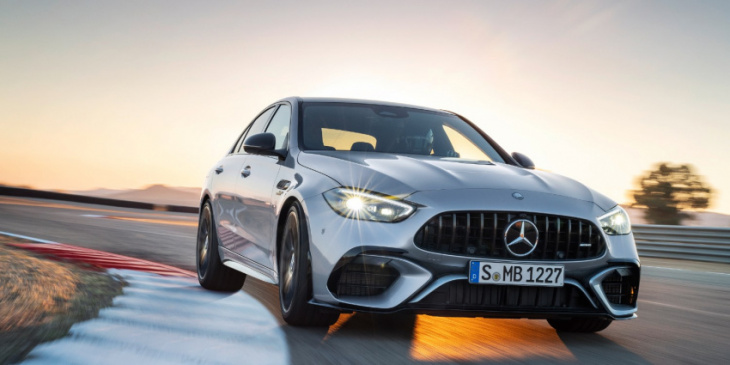 Mercedes-AMG has presented the C 63 S E Performance, a 500 kW plug-in hybrid offshoot of the C-Class with know-how from Formula 1, which will be launched as a sedan and estate. However, the development of the electric part of the powertrain was clearly focused on boosting performance.

Both the electric drive and the high-performance battery with 400 volts are proprietary AMG developments. The details of the drive have been known since March 2021, when Mercedes-AMG not only announced the first purely electric AMG models (based on the EQS and EQE), but also declared its own ‘E Performance’ hybrid drive with its special drive layout.

The most important details in brief: The electric drive on the rear axle has a peak output of up to 150 kW and a continuous output of 70 kW, and is combined with a two-speed transmission. Although the battery incorporates know-how from Mercedes’ Formula 1 engine department – the battery is specifically designed for fast power output and consumption with direct cooling of the cells – the energy content is a manageable 6.1 kWh. This gives the AMG C-Class a purely electric range of just 13 kilometres. Officially, it is a plug-in hybrid, but the C 63 S E Performance is far from an electric license plate.

On the other hand, the combustion engine part of the PHEV is new for the AMG version of a C-Class: instead of the four-litre V8 turbo, a two-litre four-cylinder with 350 kW is installed under the front hood – as with the combustion engine variants of the C-Class presented in February 2021, there are no longer any six- or eight-cylinder engines. Incidentally, the “civilian” PHEV models of the C-Class get up to 100 kilometres and can also be charged with up to 55 kW DC – in the AMG version, only 3.7 kW AC goes with the small battery.

The C-Class had to be heavily modified for AMG’s elaborate PHEV drive in P3 configuration. The front end is 50 millimetres longer, and the front fenders are wider. Overall, the sedan and station wagon are 8.3 centimetres longer and 7.6 centimetres wider, which is mainly due to the wider track on the front axle. But the wheelbase has also grown by one centimetre.

“With the C 63 S E PERFORMANCE, we are opening a new chapter in the history of our brand,” says Philipp Schiemer, Chairman of the Board of Management of Mercedes-AMG GmbH. “With its revolutionary concept, it brings a completely new approach to the segment, which until now has been primarily characterised by the promise purely of performance. With a maximum system output of 680 hp, we do indeed keep this promise. But the intelligent P3 hybrid concept offers much more. I am sure that with this technology, which incorporates a lot of know-how from Formula 1, we will also appeal to a new group of customers.”

Incidentally, the C-Class is not the first application for AMG’s P3 PHEV: In September 2021, the Affalterbach-based company had already presented the Mercedes-AMG GT 63 S E Performance, which relies on exactly the same electric drive. There, however, it is combined with a V8 combustion engine, resulting in a system output of 620 kW. But the e-range is even shorter due to the higher weight.