An electric Geländewagen is in the works at Mercedes-Benz, featuring four-motor drive and the ability to perform tank-like turns. It’s slated for U.S. sale in 2024. 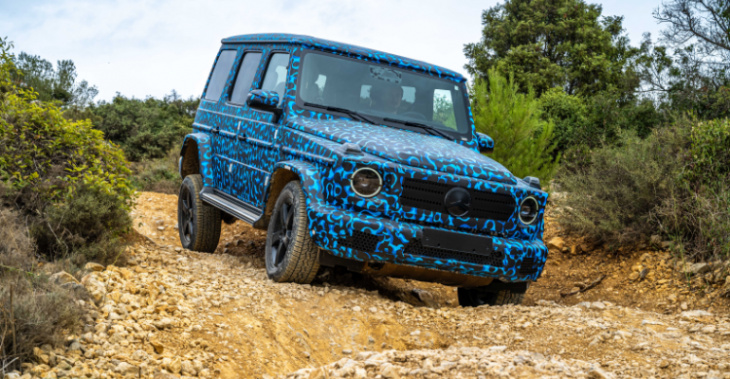 TOULOUSE, France – Testing of the upcoming Mercedes-Benz EQG has begun in earnest, with a series of prototypes being pressed into duty at the halfway point of a four-year engineering program for the upcoming model.

Originally previewed in concept-car form at the 2021 Munich auto show, the electric version of the G-Class is set to become Mercedes-Benz’s ninth dedicated electric model.

It goes on sale in the U.S. in 2024, kicking off a whole new chapter of electrification for the traditional hardcore off-roader, a mainstay of the German automaker’s lineup since 1979.

The EQG also is earmarked to act as a technological spearhead for Mercedes’ newly created G (for Geländewagen) sub-brand, promising what CEO Emmerich Schiller describes as an “unparalleled combination of luxury and off-road ability for electric vehicles.

“From the start, it was decided the electric G-Class should be at least as good as the internal-combustion-engine model both on-road and off-road. We didn’t want to compromise on capabilities,” he says.

Based on the latest iteration of the G-Class, the W463 as it is codenamed and known within Mercedes-Benz engineering circles, the EQG builds off a modified version of the steel-ladder chassis as internal-combustion models, alongside which it is planned to be produced at longtime partner Magna Steyr in Graz, Austria. 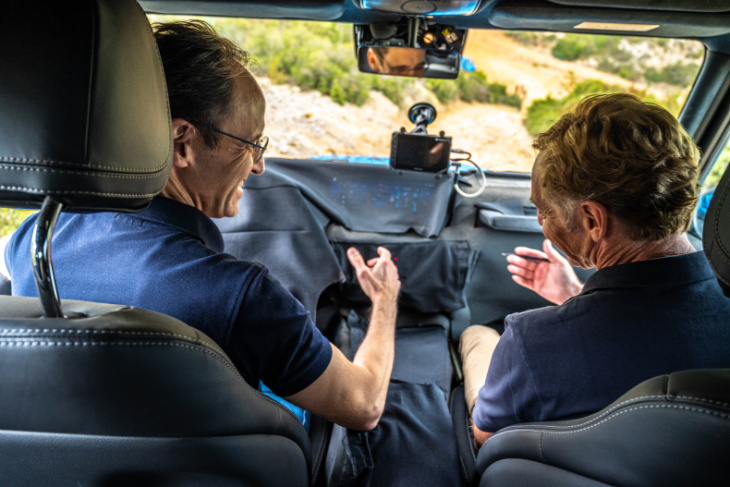 Early road-going prototypes confirm the EQG will retain the same characteristic square-rigged exterior styling as other existing G-Class models. Although disguised, they feature standard body panels together with a number of small but unique details, as hinted to on the earlier concept, including a new-look front bumper and a blanked-off grille.

“We have two skateboards with the same hat on top,” says Schiller, in reference to the ladder-frame chassis of both combustion-engine and electric models and the familiar G-Class styling.

Like Mercedes’ other EQ models, there is no front luggage compartment or frunk. The charging cable will be able to be stowed in a lockable box similar to that previewed by the concept, mounted in the place traditionally taken by the spare tire on the sideways-opening tailgate.

At the center of the EQG’s technical development is a new electric drivetrain consisting of four electric motors – one powering each wheel. Unique among Mercedes’ current lineup of EQ models, it mirrors that of the SLS E-Cell produced by the company’s AMG performance division in limited volumes in 2013.

The four-motor layout, also used by U.S. electric-vehicle start-up Rivian for its R1 SUV and pickup, is aimed at providing the EQG with what Schiller describes as an unrivalled combination of off-road performance and refined on-road qualities.

“There were intensive discussions surrounding the four-motor layout. It is incredibly complex. It is also very expensive. But with two electric motors you have differential locks, which means a combination of electronic and mechanical systems. With three motors – one up front and two on the rear axle, you don’t get the full performance in off-road conditions,” he says.

Mercedes is holding back on providing power and torque figures. However, Schiller hints there will be varying models with differing outputs, including an AMG flagship claimed to provide a level of on-road performance, including straight-line acceleration, to match the existing 577-hp twin-turbocharged 4.0L V-8 gasoline-engined G63 4Matic.

The front electric motors are mounted low at each side within the axle. The rear electric motors are integrated more inboard within a newly developed de Dion-style rear axle conceived specifically for the EQG and chosen to provide “good traction and flexibility of the suspension.”

The electric motors provide individual drive to each wheel through a mechanical 2-speed gearbox, offering both high- and low-range gearing.

To facilitate off-road performance, the electric motors also are able to simulate the three locking differentials (one in each axle, and one in the transfer case) of ICE G-Class models. In extreme conditions, the collective drive can be channeled to a single wheel to maintain traction and ensure progress.

Schiller cites throttle response among the primary advantages of the four-motor layout. “It is incredibly precise. The individual control of drive to each wheel provides a whole new level of ability. We have even more possibilities off-road. It is really fun every four weeks to drive the latest prototypes. I think we have the best electric off-roader,” he says.

Additionally, a so-called G-Turn function, activated by a dashboard-mounted button, sees the electric motors on one side turn the wheels forward and those on the opposite side turn the wheels in reverse, allowing the EQG to perform spectacular, on-the-spot 360-degree tank turns. The driver can select whether to turn left or right via shift paddles on the steering wheel.

Compact packaging of the front electric motors within the front axle permits a greater turning angle for the front wheels, leading to a turning circle that is described as being “considerably better” than that of ICE G-Class models.

The new drivetrain is allied to a battery mounted within the floor and beneath the rear seat. The lithium-ion unit, with a usable energy capacity that Mercedes puts at around 100 kWh, shares its cell technology with that previewed by the EQXX concept.

A new silicon anode is claimed to boost energy density and efficiency beyond that of the battery used by the newly unveiled EQE and EQS SUVs, while also providing a reduction in weight and overall size. As in other Mercedes-Benz EQ models, a regeneration system allows the harvesting of kinetic energy in three different steps – D+, D and D-.

It is too early in the development process to make claims about range, but Schiller says the four-motor layout provides the scope for significant energy regeneration, both in on-road and off-road driving: “In off-road, it is less about the overall range and more about driving hours. We’ve seen some incredible figures during testing.”

To protect the battery in extreme off-road driving conditions, it is housed within a sturdy sealed case that enables the EQG to wade through deep water. The steel casing also receives an additional layer of carbon fiber-reinforced polymer compound to protect against rock strikes and other impacts.

“The outer layer is made of an extremely resilient material that is designed to protect the battery at all times,” says Schiller.

One advantage of mounting the battery within the floor is the EQG’s center of gravity, which is described as being considerably lower than that of the G-Class. It comes at the cost of weight, though.

Mercedes-Benz is not prepared to talk too much about factors such as ground clearance or approach, departure and break-over angles just yet, though Schiller suggests the EQG will not only match diesel and gasoline-powered G-Class models in off-road conditions but, in certain situations, outperform them.

Despite the EQG’s ability to provide selective drive to each wheel, though, it appears prospective owners will have to forgo towing. “It is an absolute killer for the range, says Schiller. “We’re not sure at this stage if it will be offered.” 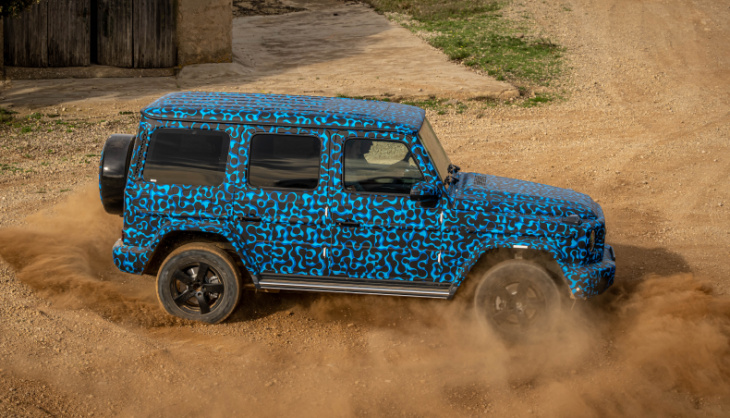