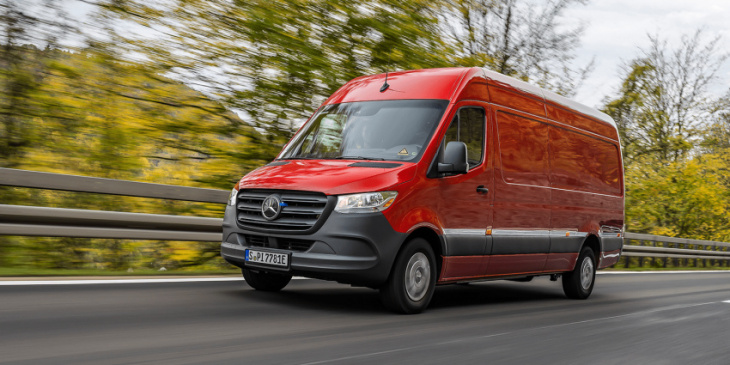 Mercedes-Benz Vans has published an update on the development of the next generation of the eSprinter. This will celebrate its world premiere in early February 2023. Currently, final test and trial runs are taking place.

According to the manufacturer, a pre-production vehicle of the new eSprinter, an extra-long version with a high roof and the largest of the three planned battery versions, completed a 475-kilometre test drive from Stuttgart to Munich and back on one battery charge. TÜV Süd confirmed a consumption of 21.9 kWh per 100 km for the test drive.

The journey was completed in inner-city traffic as well as on federal roads and motorways, and under real topographical route conditions such as the climb up the Swabian Alb. Upon arrival, a remaining range of about 20 kilometres was displayed, according to the statement.

The route of the test drive is known, as is the date (19 October 2022) and thus the weather conditions. However, Mercedes does not provide any information on the driving style. But even with an extremely efficient driving style, 475 kilometres would be an unusually high range in the segment. Although “a practical vehicle configuration for CEP use” was selected with the long high-roof version, there is no information on the vehicle’s payload.

The consumption and range figures mentioned are the values determined during the test drive and confirmed by TÜV Süd, not the standard figures according to WLTP. These are not yet known, nor do the Stuttgart-based company provide any information on the technology used in the test vehicle. From the consumption and range, however, it can be deduced that the installed battery must have been over 100 kWh.

As early as December 2020, only a few months after the sales launch of the current eSprinter, Mercedes-Benz Vans had announced that the vehicle would be placed on a new platform called the “Electric Versatiles Platform (EVP)” – there will be little or no change to the appearance of the body, the innovations are to be found under the sheet metal. It was already hinted at the time that the range would increase significantly, and that various superstructures such as suitcases, flatbeds or people carriers would also be offered in addition to the high roof.

However, the date of the changeover was still open; there was talk of “before 2025”. Now this is becoming clearer: according to the latest information, the new eSprinter is to be produced successively in Charleston (South Carolina/USA), Düsseldorf and Ludwigsfelde from the second half of 2023.