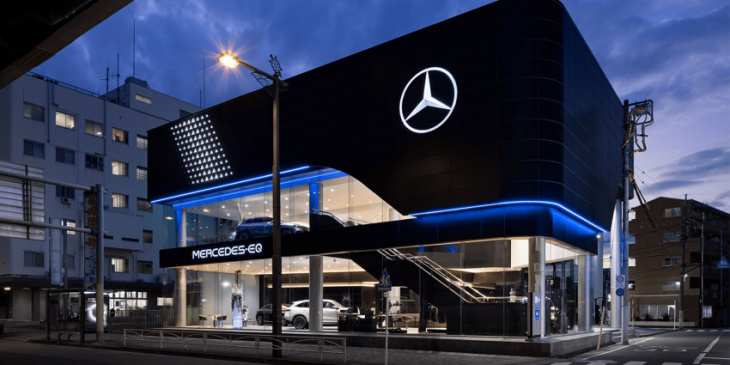 Mercedes-Benz has opened its first dealership worldwide exclusively for electric cars – in Japan. It was built in Yokohama and offers 1,221 square metres of space for the presentation of up to seven electric cars as well as an area for vehicle handovers and three CHAdeMO chargers.

Pictures from the showroom show the EQA, EQC, the EQE sedan and also the EQS – also in the AMG version. The exhibition area extends over two floors. Test drives are also offered. The workshop can accommodate five vehicles at a time.

As a special feature, the location has vehicle-to-home equipment. This is to enable (probably mainly for demonstration purposes) the building to be supplied with electricity from the electric car batteries. In Japan, this is possible because Mercedes equips its e-cars there with the widely used CHAdeMO standard, which supports bidirectional charging.

The “EV only” dealership in Yokohama operates under the electric label Mercedes-EQ. In a statement, the Stuttgart-based company justifies the move by saying that it sees “further growth in the market for electric vehicles in Japan”.

In Japan, however, BEV penetration is still quite low. And when it comes to fully electric cars, domestic manufacturers such as Nissan tend to dominate the market. But according to data from the Japan Automobile Importers Association (JAIA), electric sales are also on the rise among importers. In November, for the first time, more than ten per cent of imported cars were fully electric, with 2,357 electric cars from foreign brands.

Keyword: Mercedes has opened their first EV showroom in Japan