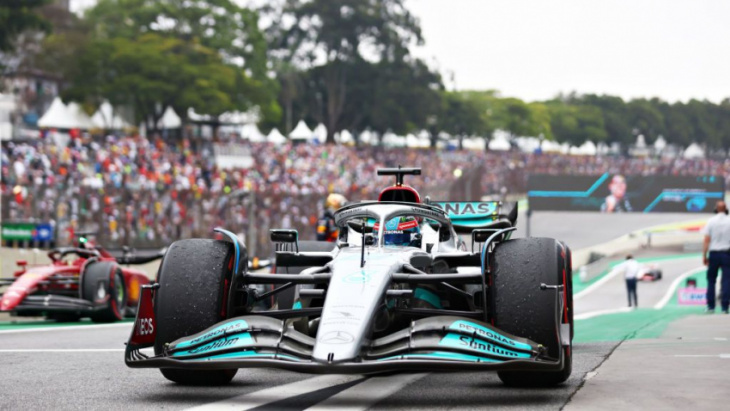 It could—and should—have happened during his extraordinary stand-in performance in Bahrain, in 2020, but two years later George Russell is finally a Formula 1 race winner.

Russell was afforded his golden opportunity for 2022, after three seasons with Williams, but his promotion to the elite came just as the reigning eight-time champions stumbled with the overhauled technical regulations. Russell had to realign his goals for the year and had a mature first half of the year, though struggled for performance in more recent grands prix. Yet in São Paulo he brilliantly seized his opportunity as Mercedes displayed genuine front-running pace.

Russell, who became the 113th different winner in the history of Formula 1, controlled proceedings from the front of the grid on Sunday and expertly managed a two-stop strategy to resist teammate Lewis Hamilton, who was compromised by an early clash with Max Verstappen, to take his maiden Grand Prix victory.

It not only marked Russell’s first win, but gave Mercedes a huge boost with a 2022 victory at the end of a challenging season. Hamilton’s runner-up result gave Mercedes with its first 1-2 finish in two years.

“What an amazing feeling,” said Russell. “A huge thank you to the whole team for making this possible. It’s been an emotional rollercoaster, this season, this race. I felt in control, Lewis was super-fast and then when I saw the safety car, I thought this is going to be a difficult end. He put me under so much pressure. But I’m so happy to come away with the victory.

“On the in-lap, all of these memories came flooding back, starting off with my mum and dad in go karting, going through and all the support I’ve had from the rest of my family, my girlfriend, my trainer, my manager. The likes of Gwen (Lagrue), who first gave me the opportunity to get on the program with Mercedes, and James Vowles and Toto (Wolff) I can’t thank everyone enough.” 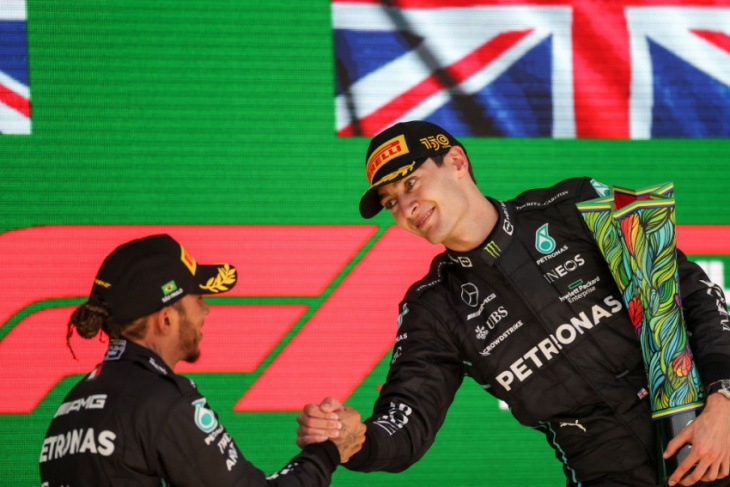 Hamilton offered Russell “huge congratulations” and said his teammate put in “an amazing drive he did today, he did an amazing job yesterday in the Sprint so he truly deserves it. This is an incredible result—we’ve worked so hard through this year to get a 1-2, and to get a win.”

The performance in Brazil allied to the results in recent Grands Prix sends a warning shot to Mercedes’ rivals as attention turns to 2023.

Red Bull has had a superb year, with both titles under its belt, but its run of nine successive victories came to a shuddering halt. Max Verstappen tried to prize second from Hamilton early on but the two clashed and he was deemed responsible.

The front wing damage caused an unscheduled stop, leaving him off sequence, but he recovered to seventh late—behind teammate Sergio Perez, who was struggling on harder tires.

Red Bull then approved Verstappen to pass Perez in a bid to try and overhaul Fernando Alonso, and potentially Charles Leclerc, but when it was clear that Verstappen was unable to do so they issued an instruction for Verstappen to relinquish sixth back to Perez. Why? Well, Perez is in a close fight with Leclerc over second spot in the standings. 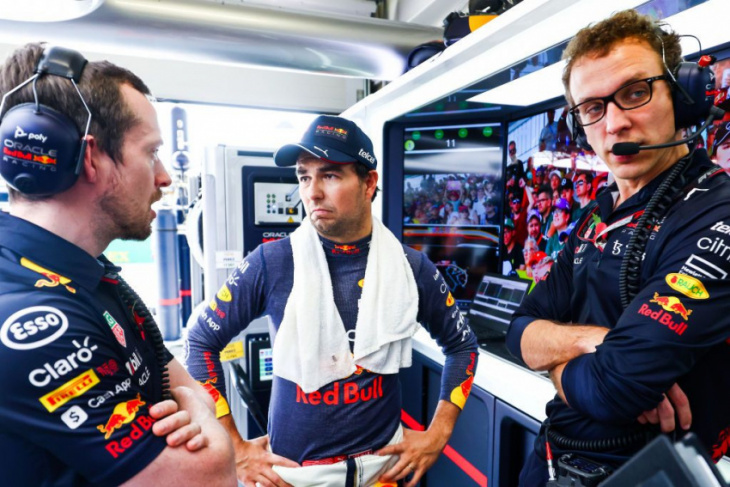 Verstappen did not obey the order, leaving Perez seventh, and instead of potentially being two points clear of Leclerc they will go to Abu Dhabi tied in points—with Leclerc currently in front on results countback tiebreaker.

“I told you already last time, you guys don’t ask that again of me, OK? Are we clear about that? I gave my reasons and I stand by it,” said Verstappen on the radio.

Perez, who received an apology on the slow-down lap from team boss Christian Horner, retorted “eh, it shows who he really is!”

There was a meeting held in Red Bull’s hospitality unit in the immediate aftermath of the race between Horner, Verstappen, Verstappen’s manager Raymond Vermeulen and race engineer Gianpiero Lambiase where feelings were conveyed, but the exact meaning behind Verstappen’s stance remained behind closed doors.

“I have my reasons for that, we sat together and talked about it and move forward from here,” said Verstappen. “If he needs the help (in Abu Dhabi) anyway I’ll be there, but we have cleared what was there, why I didn’t do it (give up the position).

Perez explained that “after all I’ve done for him it’s a bit disappointing to be honest.”

It was a nothing race result for Red Bull in the context of its staggeringly successful 2022 but Verstappen’s stance created an unexpectedly unsavory atmosphere heading to the finale, while opening a can of worms. 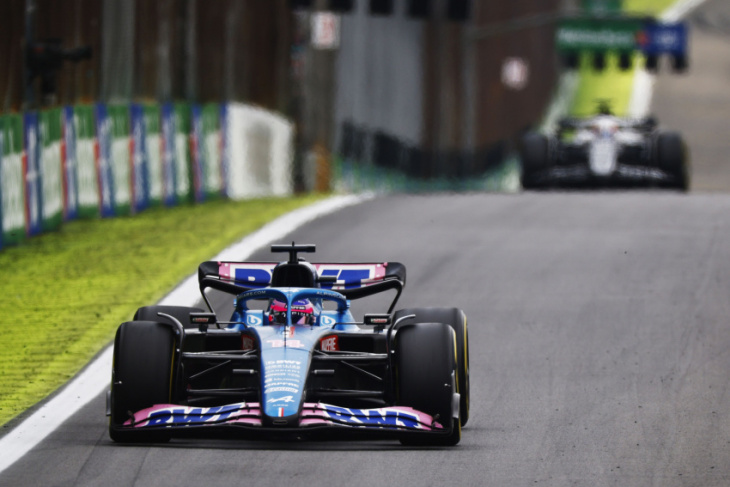 Alpine endured an awful Saturday as its drivers clashed twice, prompting team boss Otmar Szafnauer to publicly rebuke both, giving McLaren the advantage in the fight for fourth in the championship. Come Sunday the blues were in a far rosier position as they profited from drama elsewhere while McLaren had a disastrous day.

Fernando Alonso carved his way through the order to equal his season-best result in fifth while Esteban Ocon pocketed useful points in eighth.

“If yesterday was a low point in our season, today is certainly up there as a high,” said Alpine boss Otmar Szafnauer.

McLaren, meanwhile, suffered a double retirement; Lando Norris battled food poisoning all weekend but was brought to a halt by a loss of power while Daniel Ricciardo rear-ended Kevin Magnussen on the first lap and was collected by the spinning Haas. To exacerbate matters, stewards deemed Ricciardo wholly responsible (correctly) and handed him a three-place grid penalty for Abu Dhabi, leaving him compromised heading into what could very well be his final Formula 1 race.

“I touched the back of Kevin and it’s a shame,” said Ricciardo. “I think the biggest disappointment is that it was such a small touch, but it had massive consequences. I didn’t expect him to spin, I guess that was just the angle that we touched and it just unloaded his rear. I feel most times, a small touch like that, you can get away with it. So it was pretty unfortunate for both of us.”

An Unusual Situation for Tsunoda 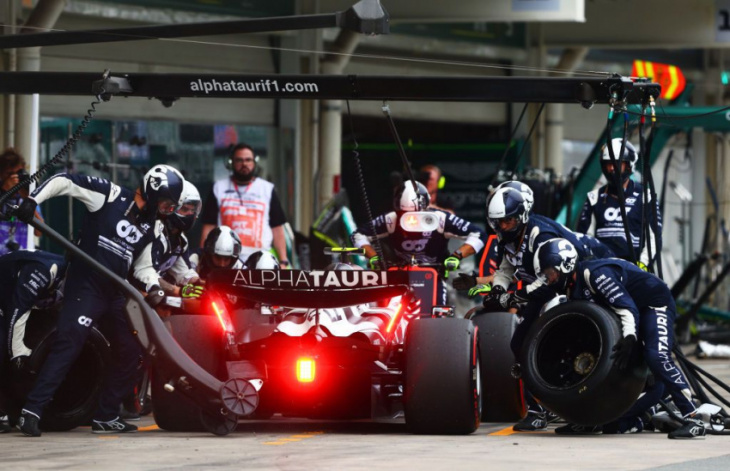 Yuki Tsunoda found himself on the short end of a technicality during Sunday’s race.

Yuki Tsunoda had a pretty lackluster weekend as he struggled for pace in an AlphaTauri car that is ninth in the championship. His prospects were further compromised by an unusual idiosyncrasy within the FIA’s timing system that left him adrift of the field at the late restart.

Tsunoda was one of three lapped cars that were due to be given the signal to unlap themselves and re-join the rear of the train. But Race Control issued instruction for only the Williams drivers to unlap themselves. It means Tsunoda was fifth in the train when the race restarted and had to immediately move aside for the rest of the field, tumbling a whole lap behind all of his rivals.

The FIA explained the situation: “Tsunoda was the first to cross SC1 [line] following the deployment of the safety car. On the following lap he therefore became the first car to cross SC1 line for a second time, which would normally trigger the systems to indicate he is eligible to unlap.

“However, at this time he entered the pit lane and was able to go faster than the train of cars behind the safety car. In doing so, he unlapped himself when crossing the control line in the pit lane. When he re-joined the circuit, the systems correctly indicated that he was again a lap down, however as he had already unlapped himself once, he was not eligible to do so again when the safety car period was ending.”

The FIA explained that it was “one of those unpredictable scenarios that can happen” and suggested it will be reviewed for the future.